Skip to main content
View other articles in "On Play" issue of magazine.
September 2015, October 2015

The Children's Meeting of 1663

“The children’s meeting” of 1663 is famous among Friends. In 1906, some Friends made a book about it, told in the words of fourteen-year-old Judith, who was there in 1663. Near the start of the book, Judith says: 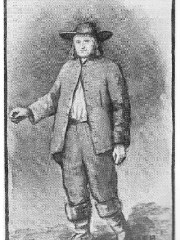 The Lord laid it upon the heart of our beloved George Fox to visit us . . . [and so many people came to hear him] that the house would not contain them; my father, therefore, [told everyone to go to] the orchard . . . Reuben, Sarah, Davie and I, with other children . . . sat together on the grass at dear mother’s feet. George Fox was mightily filled with the Spirit, speaking [for nearly] three hours, but mother sent us children to our [lunch] at the end of the first hour . . . 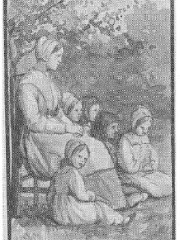 Just the year before, in 1662, the English government had passed The Quaker Act. This law made it illegal for five or more Quakers to worship together. The sheriff did not come to arrest the Quakers in the orchard that day. George Fox got quickly onto his horse and rode away. Judith tells, “[It was a good thing] that George had taken to horse so speedily, for that very next morn, about four of the clock, the house was awakened by the clattering of hoofs and loud voices . . .” About twenty Quaker adults were thrown into prison that day. The Quaker children of Reading were left behind to take care of their families’ farms and businesses and all the babies.

At the end of that first week, on Saturday, with their parents still in jail, Judith’s friend Maria came to visit and asked:

“Who will gather the meeting tomorrow?”

“To my knowledge, there is not one Friend at large in the district,” [Judith] answered. “They will meet in jail, I doubt not, but as to a public meeting, how can there be one?”

“And so the enemies of the truth are to triumph?”

“What would thee do, all the Friends are
in prison?”

“We! We are but children; would thee have us speak?”

“I would have us uphold the honor of the Lord.”

I stared at her. Such straight words from this quiet little Maria!

So the girls went to talk to the boys. And the young teens of Reading Meeting agreed – Judith and Maria, Reuben and Isaac – that they should gather the children together for worship the next day – with no adult to lead them. They knew it would be dangerous. But Judith tells that Isaac encouraged the other boys by saying, “Let the Mayor come and all his soldiers; we will show him that we care not for his beatings and threatenings, and that neither he nor any man shall prevent us from worshipping according to our conscience.” 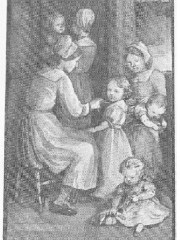 Nobody bothered the children’s meeting in the orchard that First Day. They “gathered under the trees, maidens on one side and lads on the other.” Then Judith tells that she was “almost startled by hearing a voice. Looking up, there was our gentle Maria standing up in her place and speaking . . . ‘It is made plain to me that we shall be called to answer before man for our action this day. But the Lord would have us be of good courage. . . Boys, trust not in strength of arm, but in the Lord’s grace.’”

Maria was right. Two days later, soldiers arrested Judith, Maria, Rueben, Isaac, and six other boys. The soldiers took the young Quakers to Court to stand before four English magistrates. The teens spoke politely, but the boys would not take their hats off to the magistrates, making the magistrates angry. Judith tells:

We were then ordered to promise to hold no more meetings, and great was the astonishment of the Court when we each refused. They tried to frighten us into promising . . . [and] the soldiers [took all] the boys into the courtyard and [whipped] Isaac and Reuben severely . . .

We two girls were next appealed to and bidden to promise . . . I felt a stop in my mind, and could say nothing. [Maria] irritated them greatly, for though quite respectfully, she [told them to] beware, least they themselves incurred the wrath of the Master for offending His little ones. [This so angered the chief magistrate] . . . that he reached over, and seizing us both by the shoulders, so shook us and banged our heads together that when he loosed us, Maria fell fainting on the floor, and I was so dizzy and bruised I could barely [stand].

At this moment, Rueben and Isaac, their backs bleeding from the cruel beating, were dragged into the room . . . [and Reuben scolded the magistrates] for their cruelty to two defenseless maids. I fancy his words touched their consciences, for seeing Maria recovering, they ordered us all home.

Although Judith’s parents stayed in jail for three more months, the soldiers did not bother the Quaker children again. So the children kept holding their meetings for worship each First Day all through that long time.  ~~~

You can read two longer accounts of this story, including the 1906 version quoted above, at: westernfriend.org/media/childrens-meeting-1663