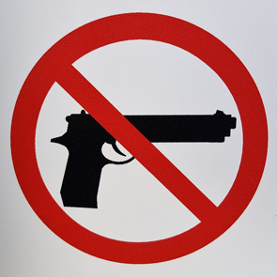 I was raised with a variety of guns hanging on a rack in the living room. I didn’t like them much, but I think I shot a shotgun once. My father hunted wild fowl on our farm and elsewhere, and we actually did eat them. My dad also had his WWII service revolver hanging from the gun rack which I found pretty scary, and the ammunition was not exactly locked away. So my truth is that I was raised in gun culture, I didn’t like it, and I didn’t adopt it.

But I do understand that people like their culture and don’t like being told that their culture is wrong. I startled when my nephew came to greet me at age 12 with an orange vest on and a shotgun in his arms, proud and ready for his first hunt. No point in me putting him down; this was a rite passage for him as part of my family’s culture.  Instead, I said a prayer for his safe return. I don’t think I would have made much headway if I had protested on the spot and given a little lecture, do you? I also knew that if he had a successful hunt, his dad would help him prepare anything edible and his mom would cook it. So another one of my truths is that I hold my tongue in situations that are not likely to be fruitful.

Gun culture is real and homey and about family for a lot of folks. And while our country has a great confusion of views about the relationship between gun ownership, constitutional rights, and war weapons, I am not going to be very successful in limiting the number of guns or ammunition rounds or types of guns if I don’t connect with the perspective and humanity of the people I disagree with. So another truth is that I must wait until I see that of God in everyone before I start talking about gun control.