In the Struggle - book review

In the Struggle:
Scholars and the Fight Against Industrial Agribusiness in California 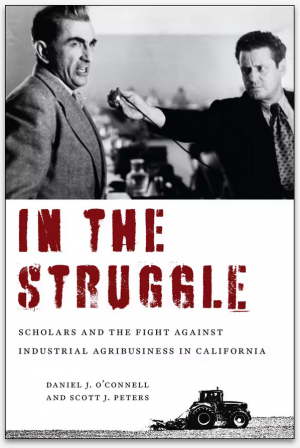 by Dan O’Connell and Scott Peters

Anyone who has driven through the Central Valley of California has seen the thousand-acre “farms” of mono-cropped fields – tomatoes, cotton, melons, almonds, and pistachios. Indeed, the San Joaquin Valley is touted as the “the most productive agricultural area in the world.” It is also one of the poorest areas in the U.S., with a lower per capita income than Appalachia.

Friend Daniel O’Connell has made the root causes of this poverty the focus of his doctoral research at Cornell University. His dissertation has now been adapted into a book for a general readership. In the Struggle: Scholars and the Fight Against Industrial Agribusiness in California relates the history of public institutions undermining the livelihoods of the family farmers and rural communities they were intended to assist and support – institutions that include universities, state and federal governments, and publicly-funded water projects like the Central Valley Project and the State Water Project.  Inevitably, a few powerful industrial agricultural interests came to dominate these institutions, control the whole region, distort democracy, and create the perpetual poverty that exists today in California’s Central Valley.

In the Struggle also describes efforts to push back against monied interests and how those efforts have been suppressed. In one example, O’Connell describes the history of a seminal piece of socio-economic research: Goldschmidt’s 1944 Arvin-Dinuba case study. This work compared the civic life of two towns in the Valley – one surrounded by family-scale farms and the other dominated by large industrial agriculture interests. The study, funded by the Department of Agriculture, demonstrated that a town surrounded by large corporate “farms” was impoverished in every measure as compared with a town surrounded by family farms. Goldschmidt’s work was vigorously suppressed from the outset and continues to be challenged today, but it has yet to be refuted.

The work of Friend Trudy Wischemann is also highlighted in a chapter in O’Connell’s book. Trudy has continued to work on the Arvin-Dinuba study throughout her life and is a prolific writer in her own right, as well as a champion for small farmers, farmworkers, land, and water.

The lessons from history presented in this book – about the struggle against the power of concentrated wealth – are still relevant to many concerns of Friends today. For example, all of the major rivers in the San Joaquin Valley have been dammed. The San Joaquin River, the second-largest river in California, now runs dry for 53 miles. Salmon returning from the sea, swimming up the San Joaquin to spawn, must now be scooped up and trucked 53 miles, then placed back into the river upstream to continue their journey. The river is dry because water is sucked from the San Joaquin Delta and sent southward in the California aqueduct, to water the farmland on the west side of the Valley, with devastating effects on the people and environment of the Delta. Groundwater pumping by agriculture has caused the land to drop as much as eleven feet in some areas, distorting bridges and canals (which now need to be repaired, using taxpayer dollars), causing wells to run dry, and leaving many communities without drinking water.

Domination of California’s fertile valleys by industrial agriculture pollutes the land and water with pesticides and herbicides. Farmworkers are paid wages so low that they often can’t afford to buy the food they are growing. Immigration policy is impacted by policies that benefit the powerful agribusiness interests.

Understanding the history of concentrated wealth in California, and its distorting impacts on land and water policy in the state, is essential if we as Friends are going to address social, economic, and environmental justice issues in California and the West. I highly recommend this book as a good foundation to that end.

Klara East lived in the San Joaquin Valley for more than thirty years. She is a member of Sacramento Friends Meeting (PacYM), where she clerks the Peace and Social Concerns Committee and is an active member of the meeting’s Eco-Spirituality Committee.