To Spank Or Not To Spank: Is this still a question? 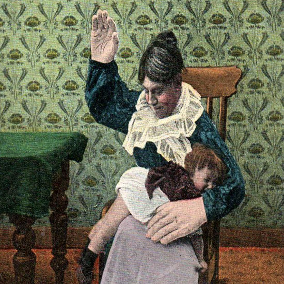 “A father who spares the rod hates his son, but one who loves him keeps him order. ” New English Bible

Proverbs 13:24 got it all wrong.  Two researchers recently evaluated at all the studies about spanking over the past 50 years, and guess what they found?  Kids who are spanked are more likely to defy their parents and generally have a harder time of it than children who are not spanked. Clearly, these findings show the opposite of the intended effect.  I don’t think Proverbs 13:24 was ever accurate; not ever.

Still parents all over the world, about 80% of them according to a 2014 UNICEF report, think spanking is the way to discipline a child. Looking at the conversation online about the study out of the University of Texas, I thought I’d stepped back into the parenting stone age. Parents used that slippery logic: “My parents spanked me and I turned out all right, so I spanked my kids who are respectful, hardworking, and love me.”  Putting aside all the reason-defying assumptions this logic presents, if 80% of parents spank their children, then 80% of all children in the world should be seen as well behaved. This math doesn’t jibe with my experience at all; this is not how the general population understands children, especially teenagers.

Yet the impassioned debate goes on. Decades of research and experience that shows that spanking just doesn’t correct behavior.  In fact, it causes behavior to deteriorate and also brings with it anti-social behavior, aggression, mental health and cognitive difficulties. Objective truth aside, parents spank their children because “It’s for their own good,” claiming that “This hurts me more than it hurts you.” No kid believes any of this while receiving smacks across the bottom or legs.

Only when a parent wants to justify the desire to release his or her frustration on a child’s body does it seem possible to form such nonsense in one’s mouth. So to those who are undecided about spanking, I say please quit hitting kids! Like the effects of global warming, the incontrovertible evidence is in.  You are harming the children and fooling yourself.

That said, we adults have to think of something that actually will change children’s behavior and give us authority in their lives. What does work?

If you want respect and love from your children and want them to be as socially well-adjusted as possible, then role model the love and respect you want from them in everything you do. When they make a mistake, forgive them, and to the extent that it is safe, let them experience the natural consequences of their actions. This prescription does not give the frustrated parent the release of a good smack nor does it look to the neighbors like you are setting Johnny straight.  Here is what it does look like.

Pat came home from school with a little red card which was the teacher’s way of letting me know that he was a significant behavior problem in fourth grade. I asked about how the day went from his perspective, I forgave him for pushing his way to the front of every line to do anything (that was why he had a red card in his pocket), and I let the natural consequences take over.  He had to learn to make amends; that is the natural consequence of making a nuisance of himself. A red card meant that he had to think of nice things to do tomorrow for the kids he smashed into the wall to get ahead. They had to be fresh ideas, and I wanted to hear how they went the next day.

Pat’s behavior was difficult for quite some time, but he also got pretty good at making amends. He did not like the red card, green card system, but he wasn’t afraid to bring the cards home. He tried hiding and lying once, but then he had to make his own card at home since he “forgot” the one the teacher gave him. That happened one time, only. Pat felt the love and respect his teacher and I had for him, and we let the natural consequences of rude behavior do the job of shifting it toward more acceptable behavior. Eventually he caught on that he wouldn’t have to make amends if he wasn’t rude and that he liked compliments. In three months, we had many more green cards than red cards.  A fourth grade boy did not become disenchanted and angry. A win for everyone.

Pat is in his 20s and still capable of being rude from time to time, but he is also good at correcting his behavior. He spends about 20 seconds trying to justify himself, but when he sees in our eyes that he is getting no traction, he regroups. Shortly, we have an amend, and mutual respect is restored. I don’t think spanking or any manufactured consequences would have helped him learn self control, love and respect, but unconditional love, respect, and role modeling did.

Pat had a soccer coach who demanded respect by making the boys run extra laps in the middle of practice if he thought they weren’t listening.  Pat caustically reflected with me, “Yea, that’s the problem.  I don’t shoot accurately enough because I am not listening.  When I am tired as shit for the second half of practice, my shots will be MUCH better.” It was a miserable two years as he learned to make the most of the situation, despite the coach who didn’t spank, but used the power of his position to enforce physical punishment. It was a lesson learned in what Pat was willing to do to get two more varsity letters instead of having to take another gym class, but that was not what the coach had intended. He didn’t get respect; to his face he got quiet contempt, and behind his back, ridicule.

And that is what seems so insidious about the arguments for spanking. On the surface of things, it can seem that the spanker taught the kid to behave and to respect. But the long term evidence shows exactly the opposite. What’s the deal?  The deal is that the kids who get spanked learn to mask their feelings and get good at sneaking around adults. They learn distrust and they are often terrified. If the spanker never tests their façades, the kids could appear to have respect and love.  All it took was a few good smacks.

Role modeling love and respect and staying out of the way of natural consequences are much harder and labor intensive ways for adults to help children learn what they need to “be in order,” as Proverbs suggests is the goal of parenting. As a person committed to non-violence, I have to be more creative than spankers, and as a spiritual person who believes that there is God in everyone, I don’t get to hit God. But that isn’t all. Just as my son learned that he didn’t like having to make amends and much preferred nice comments, I know that I don’t like putting scars on my soul from hurting people over whom I have power and I much prefer love and mutual respect. It is worth the hard work to be in alignment with love.