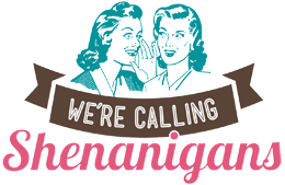 First let’s look at exactly what a shenanigan is. Everyone seems to agree that a shenanigan, or the more common plural form – shenanigans, is a devious trick, a deceit, an underhanded or questionable practice. The use of the word dates back to the 1850s in Sacramento, California where it first showed up in print.  Murky still is the origin of the word – and believe me there are strong opinions about it.

I lean toward thinking the origin is Irish. This position is supported by the sheer number of Irish pubs named Shenanigan’s. The Irish words for fox, sionnach, and to play tricks, sionnachuighm, have further convinced me that shenanigans is Irish in source. California was awash with Irish railroad workers in the 1850s, so as a person of Irish decent, I claim shenanigans as part of my culture heritage. And I have known plenty of shenanigans within and without my family.

The phrase “calling shenanigans” was popularized in the late 1990s by the TV show South Park. It seemed a less offensive way to say, “I call bullshit” – a phrase that rose in popularity with a card game where “calling bullshit” is a crucial part of the play.  I first heard of calling shenanigans in the 2000s from my teenager and his friends. They knew better than to call bullshit in the house with me around.

Although the phrase is relatively new, we all seem to know what it means, don’t we? Calling shenanigans signals that the speaker doubts the truth, the integrity of what has just been said or done.  It casts doubt on the character of the person who just did or said something that seems a bit underhanded. It doesn’t say, “You lying, cheating, fornicator.” It says, “I think that is not the case.” And it does so with a light touch – shenanigans is a silly sounding word, after all. “Perhaps,“it connotes, “this might be just a joke whose punch line I misunderstood.” It all but begs for an explanation to make the issue clear. At least, this is how I understand calling shenanigans.

So how do you know when it is time to call shenanigans? Quakers have a variety of tests for when to speak. I grew up around dairy farms, so a fine old Friend used an analogy to a cow’s digestive system to explain. A cow has to chew its food twice before it can be fully digested. She eats and swallows, then the cud returns to her mouth when she is resting and she chews some more. She swallows again, the cud goes to the second part of the stomach, and the digestive process continues as the food passes through all four parts of the cow’s stomach. It is a long process.

For Friends in worship, a thought may come to mind, and we push it to the back of our minds for a bit.  If the thought returns, we wonder if the message is just for us or maybe something to tell someone else privately. If the thought returns, usually refined in some way, and you feel like you going to burst if you stay silent, then you stand and speak.

By way of another analogy, when something bothers you a bit, doesn’t seem right, and keeps bugging you, it is time to call shenanigans. And you must. You don’t have to have proof that someone is intentionally deceitful, only a deeply nagging concern. Time to call shenanigans. You can ask for an explanation or look hard for yourself; just don’t look away and pretend it doesn’t bother you. Trust your sense of integrity, call shenanigans, and ask the questions.

I think we have a fox in our government’s hen house. I cannot blithely believe that everything will be just fine, and he won’t really act like a fox. Foxes aren’t like that. So, I will call shenanigans every time I have a deep and persistent concern, and I hope you will, too.