Quaker Indian Schools: A Legacy We Need to Heal 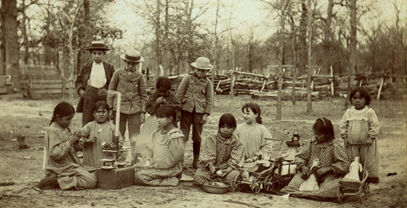 Children in Kickapoo Village, Oklahoma, circa 1890. Friends ran Indian day schools and boarding schools here and in about thirty other locations. boulderfriendsmeeting.org

I live in Indian Country. In some ways, any person living in the United States lives in Indian Country, but we still find arrowheads in my town when we dig a new hole.  My town even has a fake Indian name, Manitou Springs, Colorado.  (Manitou is an Algonquian word for Great Spirit bestowed on the area by an English soldier/trapper/spy, George Ruxton, in the 1870s.) The lore of the romantic Red Man was part of the attraction for early tourists coming to the Rocky Mountains and particularly to my town. So when I moved here with my Quaker values thirty years ago, I started to wonder about how Quakers treated Native Americans. I wanted this to be a good story.

My Friend Paula Palmer of Boulder Friends Meeting had similar questions. She has inspired scores of Quakers to learn about our role in the destruction of Native culture and to learn about how we can heal.  She went into her work and research with open eyes, not knowing what she would find.  She shared her work in workshops and talks, helping us all learn that Quakers had quite a big hand in the system of trading posts and schools for Native Americans.

Then Palmer’s research moved into the Indian school system and the Quakers’ role in it. You can read for yourself some of the original journals Palmer found by clicking here and see her presentation on Quaker boarding school here. Quakers had day and boarding schools all over the US, in about thirty locations, some operating until the 1960s. And here the story is not so good.

Like most of the white people at the time, the Quakers believed that the only hope for the Native Americans was to assimilate into white culture. The Quaker teachers believed that the Native Americans would perish otherwise and plied their services mightily and with varying degrees of success to shift the Native American children into white culture. The Quakers boarding schools cut the children’s’ hair, took away their belongings, changed their dress, disallowed any language but English, and even demanded that they wholly change their cultural gender roles immediately. The children never went home to see their families for the Quakers feared they would return to their “savage state.”  This the Quakers did with the best intentions. Merrill Gates put is this way in 1891, “We are going to conquer the Indians by a standing army of schoolteachers.”

Some of the Native children advanced into white culture, some even becoming teachers at these same schools. Others fell back into their own culture and were considered failures. Some were simply shattered. Without family support, they had lost their own culture, and they were not part of white culture either. The family structure of whole tribes was disrupted, and even though we didn’t mean to, the Quakers had a hand in this destruction.

What do we do as 21st-century American Quakers? How do we bring our values of peace, community, and equality to the truth of what our ancestors did? Palmer is working on that, too.  Learning our part is surely the first step; owning it, the second.  And after that, we must work to make sure we aren’t doing it again with our missions and projects on reservations and elsewhere in the US and beyond in South America and the Great Lakes region of Africa. And more to the question of what do we do in our everyday lives; we each seek the Light of God in our prayer and meditation and in the silent expectant waiting of worship with Friends.  And then we bravely do as we are led.