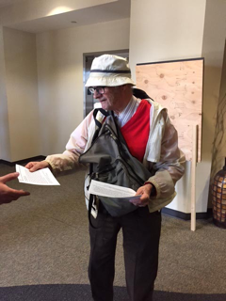 Brad Lyttle is the perennial presidential candidate you’ve never heard of. I met him at a weekend gathering of Quakers in Colorado in October. He was spry and steady on his feet, so I didn’t worry when he joined in our community getting-to-know-you games. He was surprised that at 88 he was the oldest person playing. He seemed quite at home with the Quakers, and I assumed that he was someone’s father or a member of one of the Colorado Quaker meetings whom I had not yet met. Well, I’d never met him before, he is from Chicago, and he was full of surprises.

During one of the presentations, he asked for 5 minutes to explain the Apocalypse Equation. With it, he proved that our current approach to controlling nuclear weapons is a folly. Lyttle has a secular argument for nonviolence. For those of you who like mathematics and graphs, here is the equation, its graph, and a brief explanation. 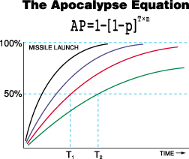 The Apocalypse Equation, (technically called a “stochastic equation,” because it describes the relationship of probability to time) shows what nuclear weapons ultimately mean for “civilization.” If each of a large number (n) of nuclear missiles existing today has even a small probability (p) of being launched, over time (T) the probability of a launch (Apocalypse) approaches certainty. The more missiles, the shorter the time before a launch (T1 is less than T2). Unless nuclear weapons are deactivated, and nonviolent means developed to take the place of military violence for achieving justice and peace, civilization is doomed.

(To read a longer article by Bradford Lyttle on the Apocalypse Equation, go to http://www.uspacifistparty.org/.)

Holy cow! This was no impassioned plea, no appeal to God, Jesus or any religious text. He had boiled down to a fairly simple, disputable mathematical equation. We need to develop nonviolent means for handling international disputes. Do it or we will blow ourselves to bits. I was really impressed. Who is this guy?

Lyttle started handing out leaflets at the cafeteria for the YMCA Camp of the Rockies – about 500 people ate there and only 90 were Quakers. He is fearless in carrying his message to all comers. I took a piece of paper from him, and then I learned a bit more about him. He is a founder of the Nonviolent Resistance/Pacifist Party, and he had an active campaign.

Lyttle has been living his beliefs for decades. He spreads the word of living nonviolence in a language that cannot be dismissed as mere religious belief. He actually did the math. He has run for president of the United States at least 5 times and was on my ballot here in Colorado. No matter how quixotic his efforts may seem, he measures his success in the number of votes and the number of times he get to explain his equation. Because some of our media outlets do want to represent outlying perspectives, his campaigns have gotten notice and he has done interviews on national television. Who knew? Not me.

So, there are a few lessons for me here:

1. I am only 61 and what am I doing to stop nuclear war? Brad Lyttle inspired me to carry my message wherever I go. Nuclear war isn’t the issue I can most effectively speak to, but I can talk about building relationships to end war. So consider this fair warning.

2.  Brad Lyttle was light hearted, friendly, adoring of children and patient with non-math types. He did not harangue. He was having a great time carrying a good message. I am encouraged that serious issues can be carried lightly for a long time. I would hate to have to give up my sense of humor for world peace.

3. Brad Lyttle surprised me. I judged him to be a pleasant member of some meeting or family, nothing more. I got caught in my own assumptions about age, an age I hope to reach and surpass. Hmmm, I’ve got some work to do.

“We’re all dancing to the revolution” was my theme song in the 80s as I marched in Washington and elsewhere for peace, women’s rights and an end to nuclear power. Brad has inspired me to find my dancing shoes again.

Photo by Molly Wingate and graph from http://www.uspacifistparty.org/