Parenting a Nonviolent Boy in a Violent World 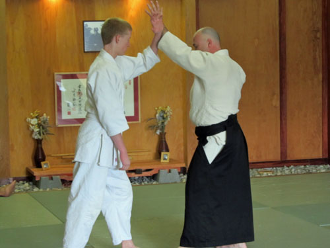 Kids with Quaker parents suffer all sorts of small embarrassments. Their parents wear political tee shirts … everywhere. Their box lunches are full of organic, vegetarian food that no one wants to trade for in the cafeteria. When the kids get together, they roll their eyes and make jokes about their urban farms, eating granola their whole lives, and when they first attended a peace rally.  And of course, they never got guns as toys, although bows and arrows were sometimes okay. But these kids interacted with the real world at school, and they had to face the violence there. It was my challenge to help them grow up as nonviolent boys in a violent world.

Violence in schools for my boys took many forms. Pushing and shoving on the play ground, bullying in the classroom and hallways, and actual fist fights. These were considered normal events by the school, and none of them required more than a meeting after school.  My strong views about nonviolence were not shared by the schools, and I was the only adult in the room that thought there was anything wrong. My insistence that the status quo wasn’t good enough was becoming a big embarrassment for my kids. So what to do?

One of my sons really suffered from bullying; it wore him down. He tired of being jumped on the playground and having to protect himself in fights. He was taller and smarter than most, but he had no interest in fighting about it. His teacher at the time was supportive, but the culture was not going to change, at least not soon enough. It was hard to be a nonviolent boy in this violent world.

A Change in Schools Helped

My son decided he wanted to move to another school system after elementary school, and he did. New friends, new school and much less bullying, he was growing happier every day. I had learned about aikido from a colleague who taught it as a nonviolent martial art; I asked my son if he wanted to look into it. It was a good match.

For 4 years on Saturday mornings, we traveled to the aikido dojo while he learned and excelled at using his strength and growing height to redirect other people’s energy so as not to hurt them and to protect himself.  He advanced into the adult classes and the adults nurtured him. He grew confident and centered.

And then he went to high school.  He seemed to get on well in the large, urban, school of about 2,000 students. His studies progressed, he played sports, and he took up theater. It wasn’t until he was a junior that I learned he used his aikido several times a week in physical challenges that happened in the halls.

I had come to school at the end of the day, and we were walking side by side in the mostly empty hall to go see a friend who taught in the building. I am about 5’3” and my son is 6’1″ tall. Three young men headed toward us, and I saw the confrontation take shape. The young men smirked among themselves and one stepped a bit forward and smiled as he lined himself up to crash shoulders with my son. I couldn’t believe this was happening with me, clearly a Mom, standing right there.

I felt my son shift the energy in his body and almost harden next to me.  He did not move to avoid the crash, and when the young man crashed into my son’s shoulder, he bounced off. “Oh man, he’s a rock!”  The bully made a joke of how surprised he was. We just kept walking, our gait unchanged.

“How often does that happen?” I asked incredulously.

“Several times a week, Mom.  I am one of the smart kids and I look skinny, so they try to intimidate me. It happens all the time.”

He Can Handle Himself

That afternoon, I learned that the bullies hadn’t gone away, but my son is not intimidated by them and had found a way of being that is confident and nonviolent. The violence in his school and in his world is not going away either, but he isn’t cowed by it or contributing to it. Aikido gave him skills and an attitude to handle the everyday violence of being a young man, and although it was my idea to begin with, I had no idea how much he would need it.  He wasn’t embarrassed to show me how he handled himself, and I didn’t embarrass him by making a scene. He has learned how to be a nonviolent young man in a violent world. I couldn’t be happier for him.