Don’t Disrespect My Mom: A Lesson in Feminism From My Son 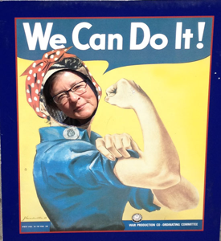 I got a frantic phone message from a car dealer’s service department. My son had responded to a survey they sent him about the service received when I took his car in for a recall repair, and he had given very low marks, commenting that they had disrespected his mother.

“I thought we had gotten along just fine,” the service guy said to me. And we had. I had expected to be inconvenienced and treated like an invisible, dumb, older woman, and I chose not to get mad when my expectations were met.  It was my son who was outraged.

Both of my sons have grown into adulthood. I had hoped to raise them to be Quakers, and failing that, at least to be feminists.  Looks like I succeeded.

Here is what happened.

I have my son’s car for 6 months while he travels, and I promised to take care of the small matter of a recall to fix some software.  I dropped into the dealership to make an appointment. After being introduced to a service guy by a salesman as “this young lady,” the service guy and I made an appointment. I am not young, and I came of age when being called a “lady” wasn’t a good thing. I remain the humorless feminist I was in the 70s.  But I needed to get my son’s car fixed, so I kept my mouth shut and wrote these guys off as jerks.

The day of the appointment for a 45-minute fix, I handed over the car to a fairly obsequious young man who said they were really slammed. No problem, I had brought work to do. Two and a half hours later, though, the car wasn’t done and wasn’t going to be done in time for my next gig.  The service guy apologized over and over; I simply said, “Let’s reschedule.”

I chose not to get mad because I was stuck with this dealership to get the car fixed, and it seemed not worth my effort to do anything but move on. The next day I got a call from a young woman to see if I was happy with the service. I said I hadn’t received any.

The second appointment almost went the same way with another service guy.  Again, “Gee ma’am, we are really slammed, so this will take a while.” I pointed out that I had already waited 2-1/2 hours and had made this my second appointment for the same repair.  Ninety minutes later, the service guy told me conspiratorially that he had bumped a few people to get me in.  Thanks? Still, it took two hours. Fine. I will never come back to this dealership, and I will warn people away from them. The car wasn’t washed as promised, nor had they completed their service check, but hey, I had the car back and I think the recall was serviced.

Five miles later, the car beeped at me and one of its indicators fired up. Low tire pressure. Instead of returning to the dealership, I went to my regular, very respectful mechanic. One tire was 10 pounds low in pressure. He thought that was odd and took the tire off to inspect it when he refilled it. Nothing was wrong, and I haven’t had any trouble since. I found it suspicious that I had just left the service bay of a dealer and now had a pretty low tire.  “But hey, it is all good, now,” I concluded when I told my son the saga.

My son was offended.

My son disagreed, and when asked to complete a survey, he told the dealer what he thought of how I was treated. How dare they treat me like an invisible person who had nothing better to do than suffer their lousy attitude and scheduling! And what’s more, they possibly introduced new problems with the car. “Don’t disrespect my mom,” he scowled.

So, there are a few things here. My son is fiercely loyal to me, as I am to him. But more than loyalty was in play. He was offended for me when I had taken the offenses in stride. He is an adult, white male, and he didn’t hesitate to call out the organization on their sexism and ageism. I hadn’t wanted to interrupt getting the car fixed to call them out – I just didn’t care that much. I was inured to the abuse.

A lesson for Mom

To be frank, my son showed me up. In this situation, he saw the abuse, named it and provoked the dealership to look into their behavior. I had overlooked it and missed a chance to make a difference. I am abundantly proud of him and very glad that he practices the Quaker testimony of equality in his everyday life. And I am put on notice.  If I don’t practice my beliefs in all my affairs, I am part of the problem. That is disrespectful.

photo of author by Brian Murphy