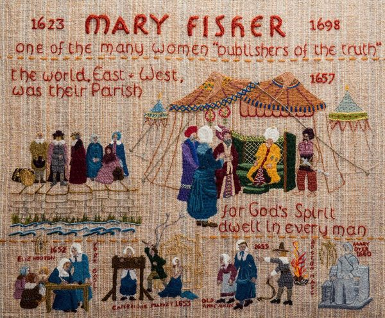 For an illiterate housemaid, Mary Fisher made some waves. Born in England in 1623, Fisher met and was convinced of the Truth by George Fox, the founder of the Religious Society of Friends, in the early 1650s. She became one of the so-called Valiant Sixty; Quakers who spread out through England and the world to preach.

Fisher was jailed often in York for preaching, and in 1653 she and Elizabeth Williams became the first Quakers to be publicly flogged for their ministry. The Church of England fought long and hard for its ascendency and did not trifle with dissenters such as Quakers. It was in York jail that other Quaker women, Elizabeth Wooten and Jane Holmes, taught Mary to read and write.

Mary Fisher travelled via Barbados to the New World where she intended to preach. In Boston, her ship was boarded and she and another Friend, Ann Austin, where whisked away to jail. The Deputy Governor evaluated the books and writing materials they had brought with them and determined that they were dangerous heretics. Their cell was boarded up so no one could have any contact. They were sent back to Barbados.

Undeterred, Fisher returned briefly to England and then traveled in 1657 with six other Friends to Turkey to try to meet with the Sultan Mehmed IV, the ruler of the Ottoman Empire. The party was strongly discouraged from trying to reach the Sultan, and most of them listened. Not Mary. Instead of turning back at Smyrna with the others, she went alone on foot from the Greek coast through Macedonia to the Sultan’s encampment in Andrianople.

No one wanted to be the one to introduce this Englishwoman to the Sultan, lest he be displeased with her and punish both of them. Eventually the Grand Vizier arranged an audience saying she had a message from God. The Sultan received her as an ambassador. Apparently the meeting went very well. They sat in silence and she then ministered to him. What she said wasn’t recorded but the Sultan reportedly found truth in in. He then offered her protection, but she declined. Her treatment was in stark contrast to her welcome in England or the New World.

She wrote of the Turks:

They are more near Truth than many nations; there is a love begot in me towards them which is endless, but this is my hope concerning them, that he who hath raised me to love them more than many others will also raise his seed in them unto which my love is. Nevertheless, though they be called Turks, the seed of them is near unto God, and their kindness hath in some measure been shown towards his servants.

In 1662, Mary Fisher married a Quaker preacher and navigator, William Bayley. He too travelled far and wide and was jailed for his preaching. Bayley died at sea in 1675, Mary married John Cross in 1678 and along with the three children she had with Bayley, emigrated to South Carolina. She died there in 1698 and was buried in the Quaker burial ground in Charleston.

No doubt she was busy with Quaker affairs in South Carolina, but she didn’t do jail time or travel the world, as far as I can tell. But what a role model! For other profiles of Great Quaker Women, please look at my blog.

Photo of a panel from the Quaker tapestry https://www.quaker-tapestry.co.uk/panel/mary-fisher