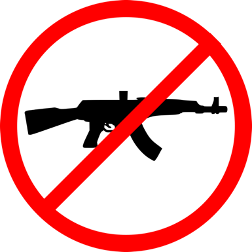 Last night’s mass shooting in Las Vegas screams for some gun control. A single shooter, 30-stories up fired into a crowd. 59 people are dead and 500 are wounded. No good guy with a gun would have helped. In fact, there were good guys with guns. The police were there.

When I talk with people who oppose gun control, the most used argument is “If you want to stop a bad guy with a gun, you need a good guy with a gun.” I’ve always been flabbergasted by that argument. Just a lot of people firing away. I want to say, “You know bullets don’t care who they hit.”

I remember watching movies of the University of Texas clock tower shooting. From the ground, plenty of men with rifles, shotguns and pistols were firing away. None of them stopped the shooter. And when an off-duty policeman worked his way on to the tower platform trying to stop the shooter, the rounds from those guys on the ground endangered him. That was 51 years ago.

We don’t learn. We didn’t move to control guns in 1966, we didn’t stop semi-automatic weapons after Sandy Hook in 2012, and I doubt that the self-evident fact that more guns create more killings will become part of the American consciousness after last night.

In carefully worded phrases, I have heard commentators talking about weapons with mass casualties. Sounds like semi-automatic weapons to me. The careful wording highlights how completely wrong headed the US gun control discussion has gotten. For fear of calling a semi-automatic weapon by its true name, it gets an abstract moniker to be less triggering to the NRA. Is that really the concern here? Firing up the base?

I’ve written about talking with anti-gun control folks before and had a hard time convincing people that I don’t want to take away all their guns. So I want to make the important distinction between the US gun culture and people owning semi-automatic weapons.

I was raised in the gun culture and had guns on a rack in the den, along with the stereo and the TV. Family members consider learning to shoot a deer as a rite of passage. My dad was a WWII veteran and had his service revolver out for anyone to see. Ammo was in the cupboard. Modest weapons for personal use.

Honestly, I tried to ignore the firepower. I didn’t like it, and it scared me from time to time. Some of my high school friends found the show of force on the wall a bit unnerving. But today I am not arguing for taking away the guns used for hunting or that are mementos, even though any mental health specialist will tell you that the presence of guns in a house increases the likelihood of deaths by accidently firing and attempted suicides.

Instead of taking away the kinds of guns I grew up with, I am talking about semi-automatic guns, the weapons capable of the kind of massacre we are reeling from today. Guns that are capable of firing hundreds of rounds just don’t serve any civilian purpose. Granted, I don’t like guns of any kind ever. But I really don’t see why the guy next door should have a gun designed to kill lots of people quickly and indiscriminately. For today, could we focus on removing semi-automatic weapons from the streets?

No doubt the pro-gun folks will talk about slippery slopes. They will argue that any control on guns is a move toward disarming everyone but the military. I really wonder why that would be so terrible, especially with regard to the type of gun used last night. So far, semi-automatic weapons in the hands of civilians haven’t saved any lives.

A total ban on firearms is not a reasonable expectation in the US, certainly not today. It does seem reasonable, though, to quit smearing our country in the blood of students, children, and anonymous people at a harvest concert.

It is time for a civil conversation about outlawing semi-automatic weapons.