Not oatmeal, not motor oil, not a parrot: It’s a Quaker! 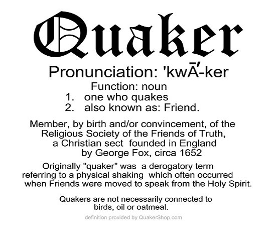 What do you think of when I say the word “Quaker?” Most often I hear, “Oatmeal.”  Occasionally someone asks, “Aren’t they Mennonites or Amish? Something about Pennsylvania?” A preschool teacher of my kids said, “Oh, I thought they were all dead.” (A month later, I was in her son’s 4th grade class proving that Quakers are alive in conjunction with a book they were reading.) And if you are into cars, you might think of Quaker State motor oil.  If you live in certain parts of Austin, Texas, you might also think of Quaker parrots, since they do very well in the wild there and are very noisy. Here is how I learned about Quakers.

I came to be a Quaker when at 16 I grew disillusioned with the faith practice of my family and went looking for something new. I was living in southeastern Pennsylvania at the time, so it makes sense that I had heard of the Quakers and eventually found myself in a meeting for worship.

I visited a local meeting by myself, and as a teenager, I was welcome to sit in silence and seek the Truth with others.  With no one telling me what to believe or think or even what to do, it was just the ticket to spiritual growth for me, and it has remained so for 45 years.

All I knew about Quakers was that they were pacifists and that they had to do with the founding of Pennsylvania. The Friends, as Quakers refer to themselves, at London Grove Meeting were very kind to me; I learned from watching them and being in worship with them. There were a lot of them, and many families attended together. The potluck lunches after meeting were legendary. William Penn himself, the founder and namesake of Pennsylvania, planted the oak tree in front of the meetinghouse. Lots of history and love.

At the end of worship, people were invited to make announcements; a woman in her 80s with a walker would rise to inform us a candlelight vigil to oppose the Vietnam War. She heartened me  — no more “Onward Christian Soldiers” every other Sunday. I still want to be her when I grow up.

Eventually I was a pretty regular attender at worship, and then I was joined my aunt and cousins. My aunt let me drive her very sporty Mustang the 10 miles or so to meeting; it was a lot of fun.

I went to college and found a tiny Quaker Meeting in the literature library.  We would chase out the few students in the room at 9 AM on Sunday morning, draw chairs into facing rows, and settle into silence. I wasn’t quite so regular in attendance during those years, but I knew I had a home every Sunday morning in silence with professors, students, and townsfolk.  I lived in Lewisburg, Pennsylvania off and on for fourteen years. It was that meeting that wrote in support of my marriage in 1987; it took place at an ancient meetinghouse called Maiden Creek near Reading, Pennsylvania.

Our friends still talk about that wedding. In addition to having no electricity or water at the site, the wedding was unlike anything most of them had ever experienced. Just as Quakers do whenever we worship together, we all sat in silence and rose when moved by God to speak. No one officiated; there was no program, no liturgy —  just a simple, pure experience of God in our midst. We were deeply blessed. In our living room, we have the marriage contract everyone signed as our witnesses on that beautiful day.

Since that time, I have raised two sons in a Quaker household, grown proud of famous Quaker women, learned the funny language Quakers sometimes use, and have become quite active in the decentralized “structure” of Friends.  For me, though, becoming a Quaker was not about learning the history or about how we do the work of our faith.  It was about being at home in the communal silence and the pure experience of God in our midst.