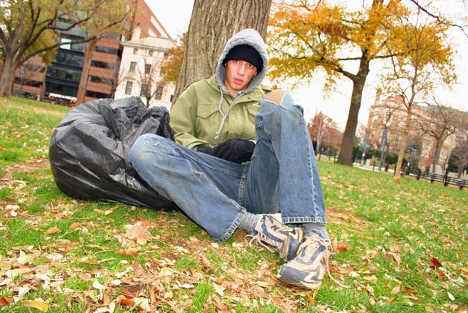 “I don’t want to think about that stuff and I’m not going to write about it either.” John grabbed his backpack and stalked  out the door.  I had pushed too hard. It had happened in a moment.

As the organizer of a writing project called Poetry Heals, I have learned great lessons from the homeless young people in my little town. They come from a wide range of backgrounds, most have mental illnesses or other chronic health conditions, and they are determined to make their lives workable. John is about twenty and had a day job building a stone wall. He had smashed his finger under a large rock and couldn’t work that day.  It was a little chilly; I offered some food, and his friend Emily wanted to write some poems, so he came along. He asked for some bandages for his wound, which looked gruesome although had been treated in an emergency room.

After some snacks, we started by writing a poem together as a group. I provided an innocuous prompt about fall weather, and John contributed several lines. During the summer, he had come to our Poetry Heals gatherings in the park, but he had just lurked on the outskirts.  During the winter months, we had moved into a church basement, and it was harder to lurk. Emily dove into her work.  She knew which template she wanted to work on.  John relaxed a bit and said he might like to write a poem, too, using a fill-in-the-blank template. He chose the topic “running.”

The first line provided by the template was: “When I was young, I ran away from ______________.” At that first line, John balked.  When I offered to take dictation for him because of his hand, he said that wasn’t it. “When I was little, they beat the hell out of me, and I am NOT writing about that.” And he bolted out the door. Emily and the others stayed and wrote poems about their lives on the streets. They read them aloud to each other and to me.

I’ve learned that these young wanderers might look tough, but they can hardly resist some positive attention.  When I stop on the street to tell them about the poetry group, I also linger to chat – how are they doing, who’s working, which restaurant is letting them have leftovers, and how the police are behaving. They make vague promises about coming to the group, and then add, “I might be busy,” and ask, “Is that tomorrow?” They don’t have a reliable sense of time, but they appreciate being treated as human.

When the group was wrapping up that day, I gave some extra granola bars to Emily to take to John. I also sent him a note, apologizing and promising that I wouldn’t approach him on the street unless he let me know it was okay.

On my way to Quaker meeting that Sunday, I saw John sitting on a bench along the street.  I slowed my car, rolled down the window, and smiled at him to see if he recognized me.  No one else was in view. He nodded. I asked him if he was still talking to me.  He said he was. He got my note, and we were cool. I asked if he still needed bandages. We agreed we might see each other on the main street in the afternoon, if he was still around. This young man, who has nothing to his name, generously forgave me. The proverbial weight lifted off of my heart.

I didn’t see John until later in the week, before the next Poetry Heals group. He said he’d be working and couldn’t come to the group, but he’d be happy to have more granola bars. He grinned at me, said thanks, and “Maybe next week, unless this job keeps up.” We had a small group that day, and I haven’t seen him since. It has gotten cold, and the homeless folks have mostly disappeared from the street. Some of them banded together to rent a place; others have moved on to warmer climates or moved back home to whatever awaits them.

I hope they benefited from my small effort to teach them how to use poetry-writing to help them heal from their traumas. I hope their lives are working a little better. But even if  all they get is a few hours of feeling welcome and having some peace, I’m glad they let me into their lives just a little bit. I know all this effort might seem like a snowflake in an avalanche. But that is what an avalanche is made of – snowflakes. Unique, beautiful, fragile.

This blog appeared first as an article in Western Friend, March/April 2017.