I know many of you have been following the story of the Jones Fire and the impact on Sierra Friends Center. The fire is basically out, though the property is still being monitored for smoldering roots and embers.

Marty just returned from touring the campus and the land with the fire crew. While there was extensive damage and loss, we have much to be grateful for. While we lost buildings, everyone was evacuated successfully, and no one was hurt. For that we can only express our deepest gratitude to the Nevada County Emergency Management teams, especially the Nevada County Sheriff who was instrumental in getting people evacuated safely and quickly, in the middle of the night.

Several structures on the property were lost, including the Cedar House where Hilary Ellis-Lavigne lived for many years. Several structures were also saved. Many of the firefighters were California state prisoners and they deserve an enormous amount of appreciation for fighting heroically to control a fire that was extremely difficult to fight. They were sent into some of the most dangerous situations and the most difficult terrain. We really want to acknowledge them as well as the entire CalFire and Nevada County Consolidated Fire District. Their dedication and fearlessness is beyond words.

All of the homes on Woolman lane were saved; with the notable exception of Amy and Chamba Cook's home which was right in the path of the fire.

We look forward to learning what damage has been done to the forest. Marty saw that the brush had all burned, but the big trees are all standing. They are showing burn marks, but hopefully are able to survive. We will be consulting with tree and soil experts to learn what we can do to heal the forest.

Finally, we are fortunate that we have good fire insurance through Church Mutual. They have been amazingly responsive. We will continue to work closely with them.

We want to thank all of you for your continuous prayers and concern and we want to assure you that we are resilient and intend to rebuild.

Click here to make a donation to Hilary Ellis-Lavigne and her two boys.

Click here to make a donation to Amy and Chambe Cooke. 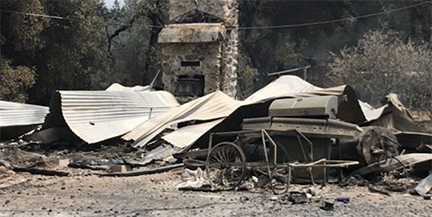 Hilary Ellis-Lavigne is a long-time Friend who lived in the Cedar House on the Sierra Friends Center campus. She worked there for many years and, among other things, taught Nonviolent Communication. She lost her house and belongings in the Jones Fire. Here is a picture of her house after the fire: 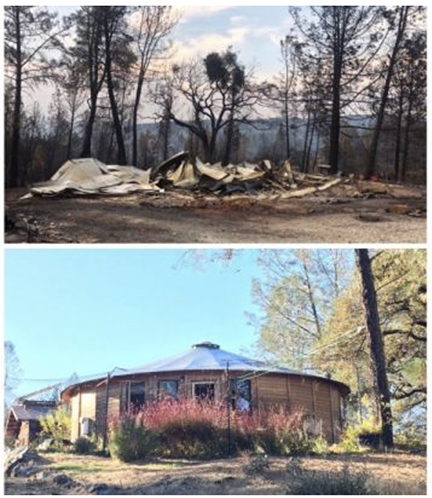 Amy and Chamba have been active Quakers for many years. Amy was the Director of Woolman at Sierra Friends Center until recently. Their beautiful, circular house was a modern yurt. It was named Innisfree (after the Yates poem).  These photos show the house after and before the fire:

Blessings to all! May all those in the paths of these many fires find kernels of hope in the ashes.