Father’s Day at Naval Base

On Sunday, June 21, Father’s Day, a small group of Friends met for a Quaker-style meditation on our responsibility as American Citizens to stop the violence that comes from our government.  We live near the West Coast’s most important weapons transfer depot: Naval Magazine Indian Island.    Weaponry shipped from here floods the Pacific basin, and has been used in Iraq, Afghanistan. Syria, Yemen, Saudi Arabia, Israel-Palestine, Korea. 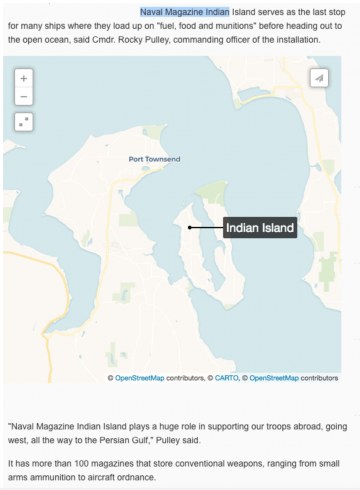 Our country is caught by the Military Industrial Congressional Media Drug Complex.   Millions have died during my lifetime from wars the United States has initiated and pursued.  Our country spends as much on its military as the next 7 countries combined. A Department of Veterans Affairs report states that at least 60,000 veterans died by suicide between 2008 and 2017, with little sign that the crisis is abating despite suicide prevention being the VA's top priority.

We spent almost 2000 times more on our military than we do on renewable energy. 11% of the military budget could fund renewable energy for every home in the U.S.  3% could end hunger in the world.

As beloved Martin Luther King said “. I am convinced that if we are to get on to the right side of the world revolution, we as a nation must undergo a radical revolution of values. We must rapidly begin the shift from a thing-oriented society to a person-oriented society. When machines and computers, profit motives and property rights, are considered more important than people, the giant triplets of racism, extreme materialism, and militarism are incapable of being conquered.”

Ending war, rooting racism out of our psyches, and reducing our carbon footprint are all necessary parts of saving life on our wonderous garden planet.