Fight Fair? Can You Really Do That? 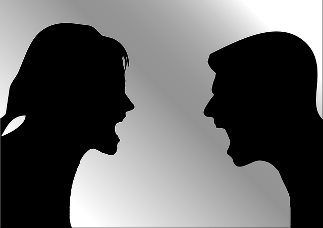 I claim that my husband and I have only had one real fight in the 40+ years we’ve known each other. Others who have witnessed us having “frank exchanges of view” might disagree. I say only one fight because we’ve hit an impasse only once. I credit our track record to our commitment to fight fair.

I am a nonfiction writer and a rhetorician; my husband is an attorney. We know how to argue. We respect the power of words – the power to do good and the power to do damage. If we allowed ourselves to fight unfairly, we could really hurt each other. Maybe it is the Quaker in us or because we like staying in a relationship, but we much prefer to come to unity about an issue. And it is hard to come to unity when one or both of us have been wounded.  And then we would also have the wounds to tend to. So we skip the mess, and just fight fair.

Here are my suggestions for fighting fair.

Stick to the issue at hand

If the fight is about whether or not to go to the beach for vacation, stick to the beach vacation.  Last year’s debacle in the mountains or last week’s struggle with daycare is not on the table. If you move into other topics, then you are having other fights. One at a time.

Never go for the jugular

Especially if you are fighting with a loved one, you both have lots of dirt on each other, and you also have detailed maps of each other’s soft spots.  Don’t go there if you wish to come to unity.  Hurting each other breeds resentment, revenge and other reactions that tear down relationships.  The special benefit of agreeing to this suggestion is that you learn that you can really trust your partner to have your best interests at heart, even during a frank exchange of views.

Agree to continue the conversation later

This handy tool allows everyone to calm down or get more information or do whatever she needs to do to be able to continue the conversation.  I have had initial forays into areas I didn’t realize were touchy subjects. Better to stop and regroup than to blunder on.  I have also grown so tired during a fight that I just need to take a break. It is crucial that all parties agree on a time and place to continue and that you keep that agreement. Postponing a discussion should not be used as a stalling tactic. That isn’t fair.

Because such discussions are intimate and vulnerable, be loving at all times.

Try your best to have love in your heart at all times.  If that isn’t working, I try to see my loved one as God does. Try to keep reactions and responses in proportion to the actual conversation, and keep an eye on the larger picture, a stronger relationship.

Resist taking advantage in a fight

Our son pointed out that in the world not everyone has the skill set to fight fairly, that some only know how to strike out in anger or fear. Others are intimidated by people with sharpened verbal abilities and won’t engage in a contentious discussion with the likes of me, my husband or either of my sons.

He points out another aspect of fighting fair; do not to take advantage of anyone in any manner during a fierce discussion. I actually do hold my tongue. I shy away from the devastating one-liner or the witty put down that is restive on my tongue.

My goal is to always fight fair for unity, and if that isn’t possible, to excuse myself while retaining my respect for the other person and for myself. So no slamming the door as I march out, either. In fighting fair, no one wins unless everyone walks away whole.