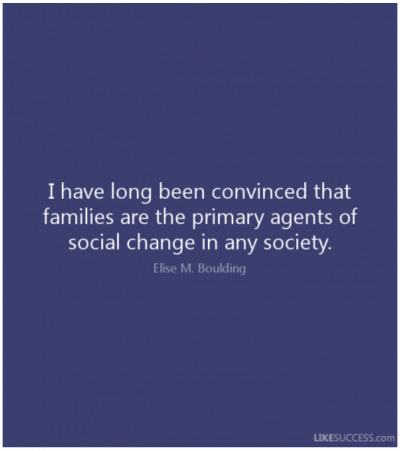 Each week for the next month or so, I will write about a great Quaker woman. These women lived full lives, all inspired or led by their Quaker faith.  It can seem too much to be a Quaker all day, every day. I hope these women encourage you!

Elise Boulding was born in Norway in 1920 and came to the US with her family when a small child. She became a Quaker in her early 20’s after becoming convinced that war was wrong. She met her husband, Kenneth Boulding at a Quaker meeting. He was a respected economist and academic.

The Bouldings raised five children, and Elise was a busy homemaker and a peace activist. She received her master’s degree from Iowa State College and her PhD from the University of Michigan. Elise chaired the sociology department at Dartmouth College when she and Kenneth were scholars in resident. There she established the first peace studies program in the country. Her ability to create and foster such programs is one of her lasting legacies.

Her perspective on peace was grounded in everyday reality. She believed that women were central to creating a peaceful world and saw peace as dynamic, not a static state. Her best known book is The Underside of History: A View of Women through Time, 1976. She chaired the Women’s International League for Peace and Freedom and created the International Peace Research Association. She worked for UNESCO and many, many other organizations.

She also had time for me. In the summer of 1991, she took me on as a student of peace studies, giving me reading lists and meeting with me to discuss them in the Boulding’s apartment in Boulder, Colorado. I also had the opportunity to meet Kenneth when he would arrive for afternoon tea. Their lifelong collaboration was a joy to witness. I was expecting my first child, and her advice to me was to sleep now, “You’ll never sleep so soundly after you are a parent.” She also agreed to offer a workshop a few years later when I was organizing a symposium on nonviolence at Colorado College. Always brilliant, gracious and direct.

Elise died at 90 in 2010. She was absolutely right about sleeping after becoming a parent and about women being central to peacemaking.