Given that Quakers don’t like to use violent words like “kill,” we use euphemisms instead.  So the current trend among Quakers to euthanize our Peace and Social Concerns Committees is one that I will call the “Shelver Movement.” We have spent countless hours in recent years trying to lay these committees down, but we end up “shelving” them instead. 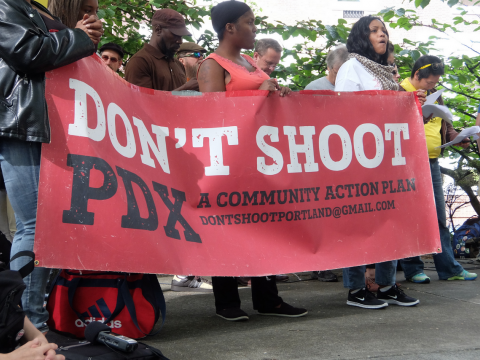 This squabbling over our Peace Committees sets a bad example for new generations of Quakers and would-be Quakers. Early Friends were not shy about taking a stand, not afraid to stick out like sore thumbs. They fought boldly and openly for the Light of Truth as they saw it: “Friends – that which is set up by spiritual weapons, is held up by spiritual weapons . . . the Lamb shall have the victory.” (George Fox, 1652) Early Friends were not concerned about making their meetings family-friendly.

The Shelver Movement emerged in my own Quaker meeting – Multnomah Monthly Meeting in Portland, Oregon – on June 22, 2014.  The proposal came to Meeting for Business that day from our Nominating Committee, which claimed it was not finding people to serve on our Peace and Social Concerns Committee (PSCC). This was at the same time that several Friends were telling me they wanted to serve on PSCC, but were not being asked. Consequently, it appears to me that the problem was never a question of “the well running dry” for Nominating, but instead a question of the “quality of the water.” That is, Nominating was responding to the “power nesters” in our meeting (folks with families, often new to Quakerism, wanting a comfortable context), who felt that the meeting had run out of “acceptable” nominees for PSCC. In this case, “acceptable” would be people who would keep the meeting away from public “ranting” about divisive issues like racism, militarism, ethnocentrism, transgender rights, etc.

Our meeting has added or renamed various committees over the years, but we virtually never shelve any core committee altogether. There was a time in the 1980s – around the time gay marriage was reaching the height of controversy in our meeting – when Multnomah “took a vacation” from peace work and temporarily shelved our PSCC. Some of today’s Shelvers brought that up as a validating precedent during our recent controversy. Also, Bridge City Meeting had already laid down their Peace Committee, as have other Friends meetings in recent years, which emboldened Multnomah to try following the same course. In any case, some Friends objected to the proposal and called for a threshing session, which we then conducted in October. What we discovered during the threshing session was that our PSCC enjoys solid support in our meeting. The committee remains intact and is now served by people who’d been eager to serve all along. That’s the kind of happy ending I’d be OK to stay with.

However, something else has been happening more recently in Portland, which is even more significant to local peace work. The Western Region of AFSC is ending its funding of Portland Peace Program – after supporting peace work in this city for sixty years. Although AFSC says that it is not planning to shut down its Portland office, (and we’ll see what happens at the end of the lease on the photocopier), they are eliminating support for the local peace program and the staff position that was assigned to it. Portland Peace Program will continue as a coalition of volunteer organizations, but AFSC’s pullout will have huge ripple effects on progressive circles in Portland.

Quakers’ widening disengagement with peace activism reflects a widening disengagement with our own history. Many Friends in Multnomah Meeting will tell you that long ago our current meetinghouse was the Jantzen Swimming Suit factory – entirely true. Few will recount, however, that Multnomah Friends actually bought the building for one dollar from Electro-Measurements, Inc., which owned it from 1953 to 1958. That company was founded by Doug Strain, a WWII conscientious objector and a long-time supporter of AFSC. Strain sold the building and the mortgage to Friends for one dollar on the condition the AFSC could have offices there as long as it wanted. The AFSC offices have moved to other locations in Portland over the years, but our meeting’s involvement with AFSC was central to our founding.

I realize my personal history with AFSC colors my view of our meeting’s collective history. When I returned to Portland after college, I worked for AFSC as a volunteer, a program clerk, and even as a paid contributing editor for Asia-Pacific Issues News. I became my meeting’s AFSC Liaison, which also made me an ex officio member of our Peace and Social Concerns Committee. No, that wasn’t my first or only committee appointment in my meeting, where I’ve filled just about every role, including assistant clerk. But peace work has been a natural center of gravity for me in our meeting. My parents came to Portland as convinced Quakers and civil rights activists, and the Portland meeting they raised me in was a place where Friends lived by their consciences publicly.

The Portland meeting I attend today is a place where we are afraid of our own activists, afraid of the limelight they could draw to our meeting. A lot of us are “power nesters” (as Madison Avenue calls us), dedicated to raising families, doing politically safe and correct things, mainly buying the right major appliances and cars, paying taxes on time, supporting charities, and being good doobies generally. But we are not boat rockers, and we certainly are not ranters of any kind. We have some world-class activists in our meeting (including my mom, an internationally recognized 85-year-old nuclear abolitionist, recently awarded a lifetime achievement award by our congressman for that work), but few of us want to be on committees with these strong-willed individuals.

My guess is that Quakers have generally become tired of standing out like sore thumbs. At one time, abolitionists shouted in public about disallowing slavery throughout the union. Today, nuclear abolitionists might shout that nuclear weapons are crimes under international law and that only “rogue states” have nukes. But that highlights the U.S. as a “rogue state” instead of Iran. We Friends don’t want such disquieting rants to dominate our meetings, much less to “represent us to the public.” Maybe it’s just that word “peace” that’s worn thin. Maybe we can pronounce the whole concept of a Peace and Social Concerns Committee as behind the times, a potential embarrassment to the meeting, a haven for boat rockers and radicals, a hot bed we don’t need. Peace activism often seems too “in your face” and aggressive by today’s standards.

The lines of social tension have become blurred for Friends who live in comfort in the U.S.  We don’t have a military draft any more. Kids don’t need Quaker meetings to help them build “CO-ready resumes” like they did in the past. AFSC is less important to Friends for the same reason. Beyond the draft, other aspects of injustice are hard to fathom, too abstract – globalization, environmental collapse, racism. Activism these days seems to require huge expertise, maybe even a doctorate.

Crying for a dying Earth – that we know how to do. But fighting the policies of Washington, DC – that just seems too daunting, especially to newer Friends who might have never been a part of any strong counter-culture. Those of us who remember enduring a war with a draft attached, who remember people who had to choose between leaving this country or going to prison, who remember people getting maimed (psychologically as well as physically) or killed, we face a generational challenge. We need to devise an intelligent torch passing. Friends today don’t see where activism fits into their daily living. We don’t have a draft, and let’s keep it that way. But let’s also keep our commitment to sticking out like sore thumbs and letting our lives speak. We could start by ranting against our government’s endless war on something as nebulous as “terror.”  ~~~

Kirby Urner was born to convinced Quakers, Carol and Jack Urner, in Chicago, Illinois, in 1958 and moved to Portland shortly thereafter. He is currently Technology Clerk for the IT Committee of North Pacific Yearly Meeting (NPYM). Read more about Kirby Urner here.