Skip to main content
View other articles in "On Competition" issue of magazine.
January 2017, February 2017

Western Friend received several accounts of Quaker support for the Standing Rock resistance in North Dakota during the fall of 2016. The opening paragraphs of those accounts are presented below. Follow this link to read the full accounts.

Standing with the Standing Rock – November 2016

Nearly 300 Native nations have pledged their support for the Standing Rock Sioux Nation to stop the Dakota Access Pipeline from tunneling under the Missouri river. Indigenous nations from South, Central and North America, and New Zealand are represented as well, speaking of their recognition that water is not just necessary to life, but is life, the same presence throughout the Earth and it connects us all on this watery planet. The Oceti Sakowin (Seven Council fires of the Sioux Nation) has convened for the first time since the Battle of Greasy Grass (Little Big Horn), heeding the call to protect at least this patch of the planet from extractive capitalism. 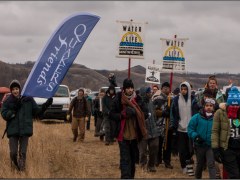 Our Time in the Camps: Waking up to the drear damp Dakota November, I poke my head out of my sleeping bag, only to turtle it right back in. It is cold out there. The day persists in dawning however I try to deny it, though, so I give in, and sit upright on the back seat of the pick up I’ve been sleeping in. Keeping the bag wrapped around my shoulders, I slice apples into a bowl, and dollop in some yogurt for breakfast. The water bottle, which was not in the cooler with the food, has frozen. Its a cold breakfast, but it is enough. I walk through the sleepy camp to the ceremonial fire, where an Elder is speaking and performing rites with tobacco. . . .

I am Tthestonotine Woman and I am called yellowknives woman, that is the name given to me. I am from Dene Land. My language is from this territory. We say Water is Life!

When I first arrived at the Border to North Dakota, a feeling of excitement came over me. Plus, knowing my journey there will end and another will begin. My thoughts were all over, then I understood it was my fear of the unknown, what would I see, would I know anyone besides my contacts? I was travelling by myself. These were the questions I needed answered to feel secure in my emotions and decisions I would have to make. I stopped along the way and asked questions of many people from all races. I was not shy when it came to asking questions—a good trait to have if you venture out alone and into the unknown.

The first blockade I went through was unnerving as I did not know what to expect. I prayed and sang to myself to calm my fears coming over me! The guard walked to my truck so I rolled down my window and said in a respectful manner, “Hello, how are you tonight?” He replied, “Good ma’am! Have you been through here before?” he asked. “No!” I replied truthfully. “I would like to inform you there are camps along the highway and to be cautious of the pedestrians walking on the highway. Watch the speed limit posted and have a good night ma’am.” . . .

In late September, the American Friends Service Committee sent a delegation of six people to the Standing Rock Sioux Tribe’s prayer camps at the confluence of the Missouri and Cannonball Rivers. The delegation traveled out of concern for the Tribe and in solidarity with the tremendous gathering of water protectors from across Indian Country now taking a peaceful, prayerful stand to save the water that flows through Standing Rock reservation and their unceded treaty land. This delegation spent four days traveling among the camps and listening to those protecting the water from Dakota Access pipeline construction. Today AFSC is releasing the delegation’s report . . .

AFSC has sought for generations to amplify Native peoples’ call for the U.S. to fulfill its treaty obligations and recognize inherent tribal sovereignty. We see construction of the Dakota Access Pipeline as another chapter in a history of the U.S. Government violating tribal sovereignty and its trust responsibility by allowing hazardous, environmentally destructive activities on tribal lands with irreversible impacts on cultural places, the health and wellbeing of Native peoples, and the environment. AFSC stands in solidarity with the Standing Rock Sioux Tribe and the extraordinary gathering of Native and allied water protectors on Oceti Sakowin treaty land. . . .

September 27th, 2016: We reached the Dakota Access Pipe Line construction site at about noon. This was an hour after prayers and reminders from native leaders at the frontline camp and after driving 30 dusty miles over empty North Dakota back roads. The front line camp is just a mile up from the large Oceti Sakowin camp, home to a couple thousand people while we were there.  “We have many warriors with us today who will protect the elders, the women, the children. Remember, this is a nonviolent action.” . . .

The call went out at 8:30am through three men and a loudspeaker on the back of a little black pickup: “We gather in 30 minutes.  We’re going out to stop their work on the pipeline.  Remember why you are here.  Protect the water.  Ready your camp.  Water is sacred.  Remember why you came here.”  We stop our packing and listen.  The truck continues through the sprawling camp past the Oglala area, the Seneca, the Hunkpapa, scores of other tribe’s camps.  Past teepees strong in the plains wind, past flapping blue tarps and flattened tents.  The nearly 300 flags on twenty foot poles that line the long entrance ramp into the camp flap proudly behind the little black truck and its call to action. . . .

QEW Statement of Support for Actions at Standing Rock – September 2016

Quaker Earthcare Witness is a North American-wide network of Friends (Quakers) and other like-minded people, who see the ecological and social crises of our times as matters of deep spiritual concern.

We are called to support the voices and actions of the more than 150 Tribal Nations at Sacred Stones Camp in North Dakota, and of others who have come forward to join them in peaceful protest, in protection of the water of the Missouri from the danger of contamination from a fossil fuel pipeline.

We see in the events at Sacred Stones Camp a clear example of how ecological and social concerns are blended in real life, when people take a stand to protect the Earth and themselves.

We are aware that the indigenous peoples of this continent have suffered greatly from the incursions of those bent on extracting resources, particularly fossil fuels, without regard for the life-ways and well-being of those peoples. . .