Skip to main content
View other articles in "On Media" issue of magazine.
September 2016, October 2016

by Darcy Stanley and Carl Magruder

Darcy Stanley: Three years ago, while helping facilitate a group in the San Francisco County jail, one of the women stood up suddenly and went to leave the room. A deputy told her to stop, but she walked out anyway, and her friend followed. The woman had a grand mal seizure and fell, and as she did, she clung to her friend’s legs. Her friend held the woman’s face so it didn’t hit the cement floor. The deputy was yelling at the friend: “Step back! Go back in the room, or face the consequences!” But she could neither leave her friend morally nor could she leave her physically, because her friend’s arms were completely wrapped around her legs. 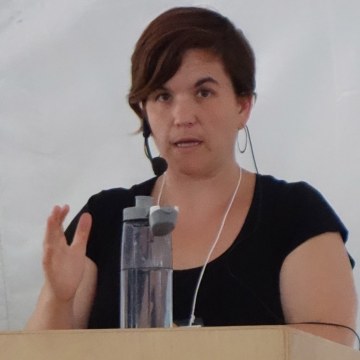 When the woman’s seizure lessened some, the friend was made to go back in the room. The room has a big glass wall, and we watched the seizure continue, watched the woman’s face hitting the floor, watched the deputy watching and doing nothing. Then the medics came and took her to the infirmary.

Everyone in the room was angry and scared and upset. I found myself explaining very briefly the idea of “holding in the Light,” and with hardly any explanation, two or three women said, “Oh yeah . . . ” and the tension in the room dropped, and several people immediately just held their hands out and closed their eyes, and we had an immediate meeting for worship.

Eight years ago, I felt a calling to become a midwife. I decided to test my calling by first becoming a doula, which is like a birth coach. I volunteered as a doula at San Francisco General Hospital, but it was really difficult logistically, and I was about to quit. Then during a presentation in one of our monthly doula meetings, I heard about the experiences of pregnant women who are incarcerated. Somebody asked the presenter, “What can you do?” And the answer was, “I don’t know, what can you do? If you bring us an idea, I’ll try to help you do it.”

Now, I was thinking, “I don’t have time to help with this.” But I was also raising my hand and saying, “Well, I’m good at organizing things, and I can bring people together.” And the following week, we held a meeting of eight doulas, and within four weeks, we were already working in the jail, providing doulas to people.

So in that meeting when I raised my hand, I also said to myself that I needed an anchor committee. I knew right away exactly which four people to ask, and I did, and they were all available. We’ve met approximately monthly for the past five years. My meeting is providing that for me.

Attempting to stay faithful to some piece of ministry in the secular world, while also staying grounded in our selves – to do that, we need accountability and support from a circle of Friends. I have this group of elders asking me to be thoughtful and not get swept up in giving secular responses to spiritual problems. And they have helped me see where my fears are getting in the way, and my anger. Through my anchor committee asking me the questions that I needed, things have shifted for me, different openings have happened, and I feel I’ve softened into this work in a different way.

So my story is a story about the yearly meeting. You raised me as a Quaker; you provided a spiritual home; you stayed with me when I was lost. You believed me when I said that I was being called to this work, and you treated it seriously.

Carl Magruder: I did my seminary fieldwork as a hospital chaplain. And I discovered in chaplaincy work in the hospital that all of the things that I had developed to cope with my life – being clever, articulate, argumentative, systems analyst, downright combative if necessary – all of that, I had to take off like a carapace and leave them in the hallway. Because they were absolutely no use whatsoever to Mrs. Higgins, whose heart disease had taken another turn towards the grave and who just wanted to get well enough to go see her favorite granddaughter graduate from high school. 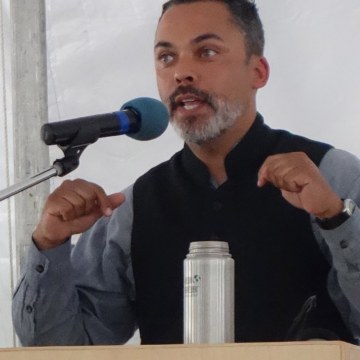 So the veil, the lifting the veil . . . You learn some fun stuff in seminary. The traditional theological word for the lifting of the veil is “apocalypse.” The word doesn’t have the horror to it that we connote – that’s “holocaust.” But apocalypse is just the reveal. It could be, for instance, the lifting of a bridal veil. But it’s the revelation of a reality that was there all along.

So the reveal that I want to talk about is the reveal that comes with death. The mystics write that the personal veil is our own willfulness, our concern for our appearance, our desire to be permanent, our desire to be powerful. And death is the end of all that. You’re not going to be a permanent. And these things that you thought mattered don’t matter. So some people in the dying process, they drop the veil, and they are in a state of grace. So, medically they decline, and spiritually they become more and more well.

I had a patient named Reena. I visited her one day as she lay dying. I thought she was sleeping, so I sat there and did a meditation on her healing. Healing is about wholeness. So I was praying for her wholeness, that the ultimate healing is death. And she lifted her hand up off the bed, and I took her hand, and I said, “What do you need, dear?” And she said, “Let me see your face.” So I leaned over the bed, and she put her hands on my face, you know, like the Jewish grandmother I never had, and she said, “You are so beautiful.” And I said, “And you are so beautiful.” And we just stayed there like that. And time expanded, and the boundary between her and me dissolved. We just stayed there in that moment, in awe of the beauty and the power of the gift of our existence.

Because Friends have no dogmas, because we have endeavored to be the smallest, lightest container possible for holding the mystical, noetic experience, we have been very attractive to rationalists and activists. Now, of course, we’ve always been rational and activistic, and that’s a fine thing. But the core of our faith is this mystical experience. Woolman said, “Love was the first motion.”

Quakers are the Sufis of Christianity. We are the mystics; we are the rebels and the nut jobs. And we are valuable in our tiny numbers in that capacity. What I invite us to do is to be willing to be obedient, to be corrected, to explore discipline, and to be willing to be transformed.  ~~~

Darcy Stanley is a co-coordinator of the Birth Justice Project in the San Francisco Bay Area and a member of Strawberry Creek Friends Meeting (PYM). Carl Magruder is a hospice chaplain and a member of Strawberry Creek Quaker Meeting (PYM). This text has been excerpted from a full transcript of these talks, posted at: westernfriend.org/media/lifting-veil.