Skip to main content
View other articles in "On Neighbors" issue of magazine.
September 2019, October 2019

Faith, Fear, and Our Future (abridged)

So. Faith, fear, and our future. You guys don’t mess around with topics for keynote speakers!

What I’d like to do is share some stories of people around the world who are choosing peace in the midst of violence and war. The book that I just published, Choosing Peace, came out of the PhD research I did when I was trying to understand how and why people choose peace in the midst of war and violence. So I want to tell you about five lessons I’ve learned through that work. 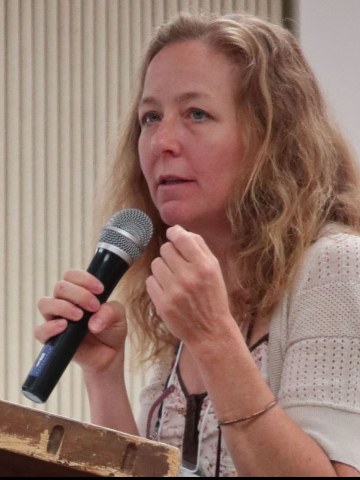 Lesson One: To bring light into the world, we must first face the darkness. George Fox talked about seeing the ocean of darkness and the ocean of light. But he didn’t turn away from the ocean of darkness. I’m sure that you all have experiences like I have in recent years, turning the TV on, or listening to NPR, and breaking down in tears. I remember the day of the Sandy Hook shooting. . . It’s really tempting to hide somewhere. But Friends are called to face the darkness. We are truth seekers, and the world needs truth seekers right now.

I want to tell a story about a group in Syria called “Zoom In.” They work and live in the Idlib province of Syria, which is one of the areas hardest hit by fighting. The group works to keep local councils functioning, to deal with local issues. These are councils of people from different ethnicities, working together in the midst of crisis.

Recently, the organization began to be targeted and the office was bombed. France stepped up and said, “We will give you asylum. Come to France. You will have safety.” And they asked themselves what to do. And they concluded, “This is our community. Even the bad things that are happening are maybe part of our community. We need to stay here.”

So I think that we are called to stay with our community, even when it is divided, conflicted, painful. I was recently back in my hometown - Dayton, Ohio - and I heard that the KKK had organized its next big march there. Now, Dayton is a racially divided city. It has all kinds of problems. But it came together over the news that the Klan was coming and said, “We will not allow this. This is not the world we seek.” They formed an organization, Dayton United, and they dedicated hundreds of thousands of dollars to addressing root causes of problems in Dayton. And the organization carries forward.

Lesson Two: Courage is a group process. Americans like to think that courage is an individual character trait. We like to have heroes. But what I’ve come to understand is that courage comes to us through other people.

Let me share the story of two sisters, Gulili and Saba Ismael. When they were teenagers, they lived in an area where the Taliban - and other armed groups - were actively recruiting and teaching teenagers to fight violent jihad. Saba and Gulili opted for something different. They started an organization to empower young girls and women, and to support young people to be nonviolent peacebuilders.

They started with a group of eight, which grew into a network of five hundred young people doing direct peer-to-peer mediation, intervention, and social engagement with their communities. Gulili and Saba are amazing individuals. They are also constantly in fear for their lives.

Gulili right now is being charged with terrorism by the Pakistani government. Because she’s vocal, and she’s speaking out for the rights of young girls, and she’s working for nonviolence and peace, she is seen as a threat. The first I learned about this, ironically, was when I was in Washington, DC, in a meeting about human rights at the State Department. There came that text from Saba, saying Gulili had been charged with terrorism.

So I stood there on the corner in DC, with the State Department behind me, and felt Saba’s fear through the phone, and I thought, “What in the world can I possibly do? I am utterly helpless right now.”

I said, “Well, of course you are. And I can do that, too. Who do I know?” So I began trying to spread the courage further, reaching out and using any resource I had, no matter how small.

Lesson Three: Peace building must involve head, hands, and heart. This comes from my friend Dishani Jayaweera in Sri Lanka, who is a remarkable interfaith peace builder. I think her approach is very resonant with the Quaker approach. We know we have to find the facts and analyze the situation. We also know that we need practical actions, which can be quite small and still quite powerful. And we know that we have to stay in touch with and lead from our hearts, our faith, our spirit, the light within. The challenge of course, is how to balance those.

I’m sure you heard about recent attacks in Sri Lanka on churches. This broke Dishani’s heart. She had worked for so many years to build communities of peace across many religious groups. And what happened immediately after the attacks? People called Dishani. And she was tired; she was actually ready to retire. But she told us, “You know, I didn’t think I could go back to the work. But my community is calling me, and so, I will.”

Lesson Four: We are called to live in the world of “now, but not yet.” Do you know this phrase? It’s an idea that Joe Volk introduced me to when I was working at FCNL. It means that we are called to live now, in the world in which we find ourselves, with all its darkness and all its light, and we are also called to live as if the world we seek is already here. Quakers sometimes call this “walking cheerfully over the earth and answering that of God in everyone.” When we live as if the world we seek already exists, we actually begin to bring that world into being. And in my experience, local peace builders around the world get this. They’re joyful people.

This is a quote from a Columbian community that remained nonviolent throughout the entire conflict there: “Despite the massacres, the targeted killings, the threats
. . . the community walks firmly in hope. The community believes in a present and a future where life with dignity enriches every tomorrow.”

And this is from Syria: “I have to work with people. It’s much better than fighting each other. I feel that something good must happen. I know a lot of Syrians who are trying their best. And all we’re called to do is try our best.”

Lesson Five: We are the ocean of light. When we think about our future, we can feel overwhelmed by the ideas and the realities of what could come. Sometimes I find myself asking, “Where’s the ocean of light? Please, somebody, show me!” Right? We’re looking for it out there.

But we are actually it. Quakers are an important part of the ocean of light. And the ocean of light is rising. It is! Don’t laugh, it is! One of the things Peace Direct does is to map where any local peacebuilding efforts are. We have mapped over 1,800 peacebuilding groups around the world. So there’s an enormous power out there, which we are part of, which is rising and growing.

This is so inspiring to me – that people everywhere are coming together and furthering the ocean of light. And these are just ordinary people. Whenever I did interviews, they kept saying, “I’m not special. I didn’t chose something special. This is just what I was meant to do.”

So I want you to pause and look around. Look at the beautiful, extraordinary, ordinary people that we are. And bathe in the light that you are. It’s wonderful to be up here. I can see your light shining so clearly.  ~~~

The text above was excerpted from a complete transcript of Bridget Moix’s presentation, which is posted at: https://westernfriend.org/media/faith-fear-and-our-future

Bridget Moix is the U.S. Senior Representative and Head of Advocacy at Peace Direct, a London-based non-governmental organization that helps identify, nurture, connect, and support individuals doing nonviolent peacebuilding in local communities around the world. She serves as clerk of the General Committee of Friends Committee on National Legislation (FCNL). She is a member of Friends Meeting of Washington, DC, and is married with two children.