Skip to main content
View other articles in "On Politics" issue of magazine.
July 2017, August 2017

Racism and white supremacy, the malignant cancers plaguing America today, are a joint system destroying black and brown bodies. In the past, the Klan did that destroying. Today, statistics do. Those statistics amount to the erasure of people. The destruction of black and brown bodies is hidden in statistics on poor health, poor housing, inadequate schooling, over-policed communities, and mass incarceration. These social ills, which overwhelmingly affect black and brown communities, are ills that Friends can help to correct. With the realization of their whiteness and their dominant position within a racialized country, Friends have the power to define spaces outside their communities, as well as the opportunity to break the past and change the future of race relations. 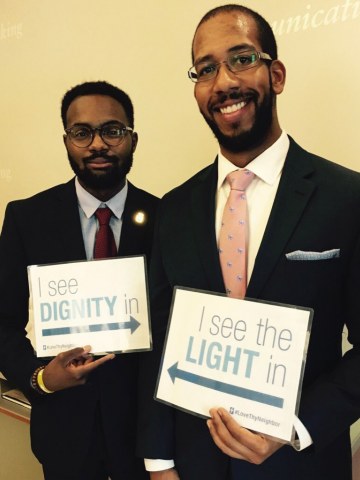 In our work as staffers with Friends Committee on National Legislation, we lobby Congress to change our country’s criminal justice system, hoping to one day end mass incarceration. Even though our system of justice places way too many people in prison or jail, the system is not necessarily made up of bad people. Michelle Alexander – noted civil rights advocate, legal scholar, and author of The New Jim Crow – encapsulates the problem well: “[Mass Incarceration] operates as a tightly networked system of laws, policies, customs, and institutions that operate collectively to ensure the subordinate status of a group defined largely by race.”

Before we can begin to change this system, we have to stop the denial, embrace the truth, and confront our history. We must understand that racial caste systems can thrive even without racial hostility or overt bigotry; they only need indifference.

Mass incarceration is no new phenomenon in America. It is based in white supremacy, and it is the newest form of our country’s ugliest sin – slavery. We mark the beginning of slavery as 1619; when millions were traumatized, humiliated, beaten, devastated, and killed; when husbands and wives, parents and children, could not protect themselves from being sold away from each other. Even though this form of slavery was legally abolished on December 6, 1865, with the end of the Civil War and the passage of the 13th Amendment, the question of freed blacks’ status in the postwar South remained unresolved. Consequently, white southerners managed to retain their dominance in the former Confederate states by enacting a series of restrictive laws in 1865 and 1866 known as black codes. Though varying from state to state, the black codes were an extension of white control. As W.E.B. Du Bois said in Reconstruction and Its Benefits, “The codes spoke for themselves . . . they meant nothing more nor less than slavery.”

Eventually, the black codes were overturned through the Fourteenth and Fifteenth Amendments, which ensured citizens their rights to due process, equal protection of the laws, and the right to vote, regardless of race. In response to this movement toward progress and advancement for African-Americans, a severe backlash occurred, which sought to establish a new system of white control. “Mischief” and “insulting gestures” became crimes that were enforced disproportionately against blacks. Aggressive enforcement of such crimes birthed a new system of convict leasing. Although the Thirteenth Amendment abolished slavery, it allowed an exception: slavery remained allowed as punishment for a crime. Under convict leasing, incarcerated populations grew ten times faster than the general population, and “prisoners became younger and blacker, and the length of their sentences soared,” said David Oshinsky, author of Worse Than Slavery.

Although convict leasing ended, Michelle Alexander points out that in the following years, “The criminal justice system was strategically employed to force African-Americans back into a system of extreme repression and control.” This system was especially severe in the South, taking the form of Jim Crow laws, which were nothing but new black codes and a new system of white control. With the Civil Rights Movement of the 1950s and ’60s, the Jim Crow system of legal racial segregation ended, but racial bias persevered, and white control took yet a new form. The “War on Drugs” of the 1980s gave us massive criminalization of drugs with a heavy focus on black and brown communities, which in turn has given us mass incarceration.

Today we see that black men are twenty-one times more likely to be killed by police than white men; ten percent of all black men in their thirties are currently incarcerated; and a young black man has a one-in-three chance of becoming incarcerated at some point in his life. These statistics demonstrate the power of the U.S. system of mass incarceration, a system born of slavery, grounded in racism.

Mass incarceration is one legal system of white supremacy that Friends can seek to change. Mandatory minimums – excessive prison sentences imposed on people who have committed specific crimes – are at the core of mass incarceration. At FCNL, we have been working with Congress for several years in pursuit of sentencing reforms. Through this work, we continue to engage with public officials who hold a wide range of views about crime and punishment. Some express deep reservations about trying to make changes, reluctant to disrupt thirty-plus years of settled law. Others mention awful cases of violent crimes or lament the possibility that soaring crime rates might return. Still others are aware that spikes in crime tend to be limited to a handful of large cities. They see that violence is often bought on by lack of opportunity, public health problems, addictions, and the historical trauma endured by afflicted communities in a country awash in guns. For some, the threat of even one person committing a terrible crime is too big of a risk for them to support changes that might improve the system. These legislators seems to make the political calculation that devastation in communities of color – including millions of children lacking parents due to incarceration, priceless years of productivity and growth wasted – is an acceptable cost of inaction. It is always surprising to hear arguments for inaction when evidence to the contrary is strong. States that have already passed sentencing reforms – like Texas and Georgia – have seen their incarceration rates and their crime rates fall dramatically.

Friends can address these legal manifestations of racism. Recruit a local sheriff or prosecutor to support sentencing reforms. Speak out against these injustices in letters to the editor. Talk about these issues to neighbors and Friends in your meeting. Join a local FCNL advocacy team – or start a new one – to build vital relationships with your Senators and Representatives. The Salt Lake City FCNL Advocacy Team built such a strong relationship with Representative Mia Love that a member of the Advocacy Team texted her to say happy birthday! That kind of relationship – in the quiet, persistent manner of Friends – is what we need to make ourselves heard above the noise of partisanship. We have some allies in the new administration and many, many partners in the 115th Congress. Nevertheless, we can’t stress enough how important the constituent voice is in making these issues a priority.

Friends have the power to break the past and change the future of race relations. First they must listen. White Friends must take the time to listen to black and brown people. Hear what we are saying and how we feel, and do not debate it. Next, amplify the voices of black and brown people. Give your “microphone” to someone black or brown. Support them in sharing their lived experiences in today’s digital society. Share their Facebook statuses and retweet them. Furthermore, talk to your family and friends. When someone makes a bigoted, hateful statement at the dinner table, speak up against it. We cannot fix anything until we change hearts, minds, and ideologies; and we do that by challenging those closest to us. We are all prejudiced, and we must confront that truth. Prejudice can manifest itself as micro-aggressions or as strong, even hurtful attacks. We cannot ignore these realities. Sitting in awkward silence will not work. By tolerating such remarks – no matter how “benign” – Friends may even signal their acceptance of white supremacy. Be a witness! When you see a black or brown person getting pulled over by a police officer, pull over too, and watch the encounter from a distance. Record what’s happening. Report it to your elected officials. Democracy happens every day.

Demand accountability from public officials. Visit a local jail or prison, and share that experience with your members of Congress. Friends can reach out to Senators Mike Crapo in Idaho and Ben Sasse in Nebraska. Both are new members on the Senate Judiciary Committee tasked with reforming criminal sentencing laws. Friends can urge them both to work to reintroduce the Sentencing Reform and Correction Act. Moreover, when working with members of Congress on any areas of public policy, Friends should remember to examine those issues through a racial justice lens.

There are many actions Friends can take to support efforts to overcome white supremacy, such as donating to anti-racist movements and organizations like “Black Youth Project 100” and “Dream Defenders.” Lastly, commit yourselves to fixing this. You are not helpless. Use your bodies in this struggle. Take to the streets, march, protest, show that you oppose white supremacy. Be a leader in dismantling white supremacy; show that you have a vested interest in the wellbeing of black and brown people. Do not monopolize the space, but be present. The world is waiting for your helpful hand.  ~~~

Aristotle Jones serves as a program assistant working on mass incarceration. His primary responsibilities are to lobby members of Congress and to pursue a just society.