Skip to main content
View other articles in "On Money" issue of magazine.
November 2015, December 2015

Dalit Baum is the Director of Economic Activism for the American Friends Service Committee. In the following interview, she describes her involvement with the “Boycott, Divestment, and Sanctions” movement -- a campaign of nonviolent actions that seek to transform corporate practices in Palestine and in U.S. prisons. She was interviewed in October 2015 by Greg Elliott, who is the Friends Relations Associate with the AFSC in Philadelphia. Dalit has worked in AFSC’s San Francisco office since 2013. She is a feminist scholar and teacher who co-founded the organizations Who Profits from the Occupation and the Coalition of Women for Peace in Israel. The following text is an edited transcript of portions of Greg’s interview with Dalit.

Greg Elliott: When did you first feel called to work for a just peace in Israel/Palestine? 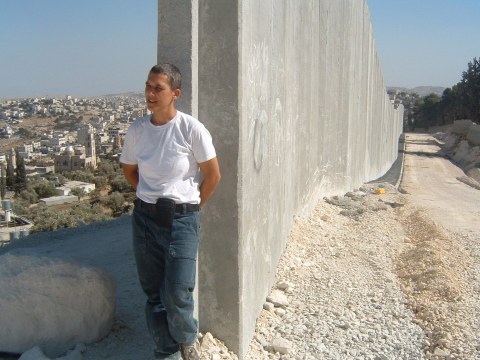 Dalit Baum: I am an Israeli Jew. That means I grew up in that country called Israel and also called Palestine. It also means that like many Israelis, I was blind to what was going on around me. So for me, like all activists, it was a long process of discovery, starting out with my work in the Israeli Feminist movement in the late 80s.

GE: How did you transition from working on feminist causes to working on the Boycott, Divestment, and Sanctions movement (BDS) to change Israeli policies towards Palestine?

DB: In the early 2000s, I was working the Coalition of Women for Peace (www.coalitionofwomen.org); it was a feminist coalition of Jewish and Palestinian women inside Israel working against the Occupation. One of the turning points was the Palestinian civil society call for BDS in 2005. It came from our immediate allies, from the organizers of nonviolent protests in the occupied West Bank, it carried a lot of weight and created a dilemma for us: What is the role of Israelis in supporting a call for a boycott on Israel? As we were using consensus decision-making, this discussion took several years.

Consensus decision-making is a slow but also a very productive process. Along the way, we have decided to start a research project: Who Profits from the Occupation? This has later become an independent research center (www.whoprofits.org). We asked: What is the corporate interest in the Occupation? Who has that corporate interest? We had no answers. It’s not just that we in our group didn’t know; this research hadn’t been done before.

GE: Is your work at AFSC centering on BDS or are you working on other economic activism campaigns as well?

DB: Right now, I am the Director of the Economic Activism Program, which is focusing on effecting corporate interests in Israel/Palestine, but also trying to support AFSC’s economic activism work on other issues. For example, one of our main projects now is in collaboration with our Tucson office, doing research similar to what we did in Who Profits from the Occupation, and looking into corporations that profit from private prisons or from privatized services to prisons in this country.

This is not academic research. This is research for activism. Much of it is thinking strategically about what people can really do and where can we make a difference.

Where is the people power when it comes to certain corporate policies? In this case, there is already a prison divestment movement in this country, and our hope is to try and support it, but also to expand its view into all the industries that are involved. We want to look at privatized services provided to prisons in this country -- like food services, health services, and transportation services --  including services in prisons that might not be privately managed. All these create a huge corporate interest in the expansion of prisons and in mass incarceration.

GE: When you say that this is “research for activism,” I know that you’re talking about nonviolent activism. How did you become committed to the use of nonviolence for social change?

DB: My first introduction to nonviolence was through the Palestinian movement against the Wall – the Anti-Wall Movement. People are more familiar with this movement now because of all the movies about it, such as Five Broken Cameras, Bil’in Habibti, or Budrus. I think that for many Israeli activists such as myself, who were only familiar with nonviolence in the abstract, the Anti-Wall Movement was our first encounter with what nonviolence looks like in a very extreme setting, with people standing empty-handed in front of the guns, people getting killed. Before then, I hadn’t experienced entire communities going out and protesting. I was in many protests inside of Israel, but always as part of a small group that was marginalized and mocked, not as part of an entire community marching out in front of the army. So this was my school, you know? It was one of the main stages in my personal education about nonviolence.

GE: Why is economic activism effective as a form of nonviolent action?

DB: We often think of corporations and corporate power as way beyond our reach because we’re talking about so much money and so much power. But my experience has shown me that organized people are quite capable of changing corporate behavior. In fact, at times, changing corporate policies may be just one step in longer  process of changing people’s minds and changing national policies.

When I was still in Israel working with Who Profits, we focused on exposing specific corporate complicity in specific violations as part of the occupation, like a company that had a factory in an illegal settlement, or a company that sold a specific type of equipment used in severe human rights violations. When activists around the world started to confront companies about such violations, we saw companies, one after the other, stepping away from this type of business. This was a very, very long list of successes. The U.S. umbrella coalition, the US Campaign to End the Israeli Occupation, has just published a list of 100 victories that the BDS campaign has achieved during the last the ten years (see: http://www.endtheoccupation.org/article.php?id=4503). Companies respond to such public concerns; they do not want the controversy and reputation risks. This does not create an immediate change in the conditions for people on the ground, but it creates hope, and supports the creation of a nonviolent movement for change in Palestine, and here. For me, that means that we are obligated to continue doing it. In such terrible times, once you find something that works, you really have to do it. That’s how I feel about it.

GE: There are some people within the Quaker community and in the larger interfaith community who still have reservations about supporting BDS. One of the critiques is that it’s unfair to have a negative impact on Israeli businesses or citizens who aren’t operating or living in the Occupied Territories, or they say that BDS unfairly points the finger at Israel. How would you respond to those concerns?

DB: All of these statements, in my eyes, reflect a misunderstanding of how these tools actually work. Because we are not really working against any company, we are not trying to punish them, we are trying to make these companies better. We are trying to make them include a human rights analysis in their decision-making process, which will make their decision-making process much more sustainable and supporting of human life on the planet.

None of these tools, including consumer boycotts, should really affect the corporate bottom line. Divestment and consumer boycotts are always coming from below, trying to weigh in on corporate decision making by reminding the corporation that it should take into account the concerns of its workers, investors, consumers. It is a reminder, using symbolic noncooperation. Divestment is symbolic. Consumer boycotts are symbolic. Just like if you were out in a demonstration with a sign. A boycott is just a very big sign.

I think one of the misconceptions about boycotts in general comes from our militaristic thinking, being immersed in this militaristic culture: people think of a boycott as a weapon. A weapon is something that you aim at your enemy and use to harm them, or you use it to threaten them in order to submit them to your will. We are not trying to harm Israeli businesses. In fact, most of the targets of BDS are American corporations. We are trying to change the policies of these companies so that we can turn them into a power for good.

GE: Someone reading this might say, “Well I’m just one person. What difference does it make if I boycott Hewlett-Packard?” 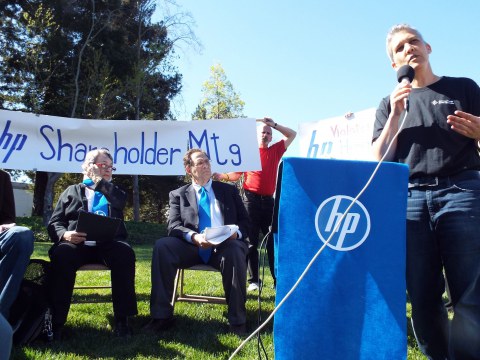 DB: I get a lot of questions from people who ask me for the boycott list. Well, there is no boycott list. This is another misunderstanding of boycotts. People think about consumer boycotts in the consumerist worldview, which is all about your personal shopping choices. It’s like those commercials on TV that say if you buy this soap you’ll be beautiful, or if you refrain from eating that thing you will be righteous. Boycotts are just one tool in a campaign. Instead of a boycott list, what we have is a list of campaigns that people can and should join. And joining a campaign is much more than not buying some brand. If we ask people to boycott Hewlett-Packard, then of course we don’t want them to buy anything that says “Hewlett-Packard” on it, but we also hope they will look around and try to educate the local storeowner about why they think people shouldn’t buy HP. And maybe they can work with others to try and make connections with other struggles, because HP is involved in managing big populations in prisons and the surveillance of immigrants in this country, as well as doing much of the same as part of a military occupation in Palestine.

The idea is that we trace our own complicity. That’s how it works. You trace your own complicity in evil. You don’t agree with the Israeli military occupation? Good. Why do you support the companies that continue to maintain and uphold it? Why do you continue, as a U.S. citizen, to pay for the weapons that fuel this violence? Once you figure out your own complicity, you try to use it to change these policies. The one tool that you always have is the tool of noncooperation, the workers’ strike. It’s a tool of the powerless, the people who are not invited to where decisions are being made. You withdraw your support, reminding decision makers to include you into the conversation and reach some compromise.

As an Israeli, I can trace many lines of my own complicity to the violent dispossession of Palestinians. I think Americans can do the same. This is not about shame or guilt, it is our opportunity to make some difference, just by withdrawing our automatic support.  ~~~