Skip to main content
View other articles in "On Mixture" issue of magazine.
November 2018, December 2018

Julie was the most popular girl in our grade. Her opinion carried weight. When, during homeroom, the girls’ conversation had turned to race, my mind froze.  But Julie’s words released me. I could breathe again.

That was the first time I felt how meaningful other people’s words about race were to me, words spoken in a farming community in western New York. Julie was speaking about her cousin, and somehow it was soul-deep personal to me. She was talking about an invisible yet essential part of my being. Rejection of her cousin’s boyfriend would have been a rejection of me. 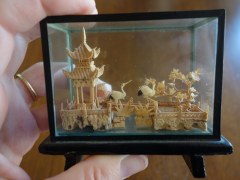 Before I was five, I’d lived in three countries. I was born in Thailand and for the first few years of my life, I was raised there and in Argentina. During those years, almost anywhere I looked, I saw brown-skinned people. My caregivers were Thai and Latina women, and I loved them.

Though too young to remember much of our time in Buenos Aires, I was given the gift of my first language there, Spanish, which quickly washed away when we left. I was shocked into whiteness as a four-year-old, when my dad’s US government job ended, and we moved to my dad’s family farm in an almost exclusively white town in the US. I felt as if I’d come into a movie ten minutes too late and couldn’t quite make out the story; my peers all knew something I couldn’t grasp or fathom. I had to go along with this gap in my knowledge, a stranger in my own country. I was surrounded by people who looked like me, but I also identified deeply with people I didn’t resemble, people who had shared their humanity with me. My cheerful spirit, which had roamed freely before, was now trapped and constrained by rules beyond my ken.

I’m white, by blood and by family. I’m part of a river of white people formed of streams flowing from many lands, including Ireland, Germany, England, Scotland, Wales, Prussia, and France. Yet my personal culture is even more broadly blended. Deep inside me, I carry connections with beloved people and countries from my earliest years, especially Thailand. Culture isn’t skin color, blood relatedness, or family name. It’s the distillation of our predecessors’ optimum ideas and methods for how to be human, passed along like family heirlooms, old country songs, and ways of relating to the world and each other. These transcend skin color.

In my first several decades in the US, I lived with an uneasy tension between my pride in my birth land and questions about my right to claim that land or that pride or even that connection. In my twenties, I sought out connections to the Asian community in the Pacific Northwest, where I’d moved to take a job as a wilderness ranger. I sought these connections with uneasiness. I followed my heart gradually. I knew that as a white person, even one with a personal history in an Asian country, no Asian community was under any obligation to accept me. Nonetheless, that feeling of connection, of being marked by a culture, persisted, and I followed it.

I finally returned to Thailand in my thirties. I sought out places and people significant to me: the hospital where I was born, the place where our old house stood, my “big brother” Wichian. My parents had “adopted” Wichian when he was a bright high school student about to embark on a cultural exchange in the US. Later, he visited us on our farm in the US, during his college breaks from business school. He walloped my sisters and me in Monopoly. We played little-kid Monopoly while he played MBA-monopoly. We didn’t stand a chance. Thirty years later, he had become a successful Thai businessman

Returning to Thailand was thrilling, but I continued to wrestle with questions that had dogged me my whole life. Excusing myself from dinner one night, I walked alone in a vacant lot, thinking, crying, feeling – variations of what I’d felt and thought many times before: Am I home? Where am I at home? I’m not Thai, yet I was born here. I feel my connection and my separation, my likeness and difference. My identity doesn’t show on my skin, but I carry it. But who will believe that I carry it, when nobody can see it, not even me? Am I even just a little bit Thai? How do I claim my identity without denying anyone else’s? Does Thailand claim me?

Living in the US with a cross-cultural background, my visible and socially defined racial identity as a white person bangs up against my internal experience of being “white+” (for lack of a better way to put it). Awareness, observations, and questions about race are with me daily. I find I must keep telling the truth of who I am, even though others often see that as a challenge, even if it opens me up to judgment or disdain. I am who I am because of who I loved and who loved me. I honor their love by embracing the spirit they helped to nurture in me.

Generally I find that white anti-racist activists are the least open to my experiences of cross-cultural identity, while many people of color have room in their own experiences to accept me for who I am. Perhaps white anti-racists think I’m trying to say that I’m not white – so many of us wish we weren’t – but I’m not hiding in someone else’s culture. My cultural identity is mine. I accept my whiteness and use my enhanced vision to bring a new view to the world.

My early experiences have given depth to my perceptions of the construction of race in the US, especially of whiteness. I am continuously aware of a fundamental absence maintained by the US construct of race, like a shift from three dimensions to two.  So much has been lopped off and discarded. Compared with the vibrant, buzzing, blazing world of my early childhood, the flatness of white culture feels constricting, stifling. This awareness fuels my desire and feeds my ability to push forward for racial equity in the US. I see what’s missing. I see that we European Americans have traded much away in exchange for life at the top of a manufactured pyramid of race. I do believe, however, that all of us can recover the juicy, rounded vibrancy we have lost. That is my North Star. That guides me as I navigate along the path toward racial equity, a kinder and more just future, and a deeper and truer humanity.

Fifty years after I first left Thailand, my nine-year-old daughter, Amina, video-called me from Chiang Mai, where she and my wife, Sariya, are spending the summer with grandma and family.

“Mama, I miss you! When are you coming?” Using a computer app, she cycled through a dozen comical cartoon images, super-imposing them on the video views of herself and me – funny hats, bursting stars, goofy faces. She paused on one that showed her crying, dramatizing her response to my absence. She was in her pajamas, her waves of dark brown hair framing her, cartoon tears streaming down her bright face. Her nighttime is my morning. I can hear Sariya speaking Thai with some friends in the background. Amina will join that conversation in Thai after she says good night in English to me. Bi-lingual, bi-racial, bi-cultural, she’s an arrow zinging to tomorrow.

“I’ll be there soon, sweetheart. My flight leaves next week.” She clicks to a smiling cartoon overlay, bursting with hearts.

Gillian Burlingham, as a union electrician and experienced Buddhist meditator, is a confident explorer of light and dark. A former wilderness ranger and farm girl, she can still call the cows from the back forty acres. She is a member of South Seattle Monthly Meeting (NPYM).