I was living in the Mua Hills of Kenya in 1969, an area where the Kamba tribe is predominant. One day I was walking down the road and noticed a group of Maasai – the Kenyan tribe beloved by tourists – at the home of a local villager. Kamba and Maasai cultures are quite different from each other. The Kamba care for small farms – growing corn, beans, bananas, and other crops, along with a few cows, goats, sheep, and chickens. The Maasai are a pastoral people who traditionally raised cattle and lived off them, including drinking their blood.

I was told that Maasai had a custom of going to the Kamba to get wives. When a Kamba girl was around sixteen years old, her father would give her in marriage to a Maasai, probably as a second or third wife. In return, her father would receive a dowry of ten or more cows. The girl would have no say in the matter. Her life would be completely changed – from lush farmland to dry bush, with dramatic changes in diet and dress, and a completely different language. 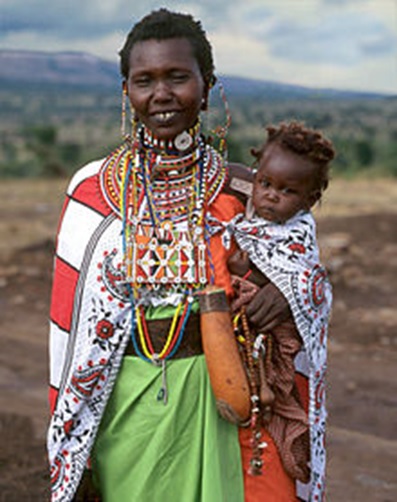 Even back in 1969, I wondered: If a Kamba girl married a Maasai, did she remain a Kamba, or did she become a Maasai? Any tourist looking for a picture of a Maasai woman would have seen her as a Maasai. But for me, over the years, the underlying question became: Is “tribe” something “biological” – as the conventional wisdom assumes – or is it actually social?

When a woman gets married in eastern Africa, she moves to her husband’s family, where she is firmly under the direction of her mother-in-law and all the other relatives who live nearby. She must adapt. Regardless of the tribe she came from originally, all her children will be considered the tribe of her husband. It is this firm rule – that a person’s tribe is that of their father – that keeps the concept of tribe effective. No one can be mixed. If a woman’s children could be half Maasai and half Kamba, then the whole system would quickly collapse, since most people would be of mixed ancestry.

Marriage in the region is exogamous, meaning a person must marry an outsider. Moreover, the concept of “incest” covers a much larger group than it does in Western culture. It is taboo to marry anyone in one’s father’s clan. Even more, in some cases, a person may not marry anyone in their mother’s clan either. Since clans can be rather large, every Kenyan is mythically related to quite a lot of people they cannot marry.

One of my wife’s male cousins is from the Maragoli sub-tribe of the Luhya tribe. The Luhya tribe contains eighteen sub-tribes, which all have slightly different languages and customs. It was only in 1940 that these sub-tribes came together, for the purpose of working as a united force in Kenyan politics.

My wife’s cousin married a woman from the Kikuyu tribe. As expected, the new wife assimilated to her husband’s tribe. She learned their language, taught in their schools, and became the Chief Education Officer of their district. She lived as a Luhya with her Luhya husband, near the border between the Luhya and Nandi tribal areas. Then the post-election violence of 2007-2008 occurred. In January and February 2008, the Nandi were attacking the Kikuyu, whom they considered to be their enemy, but not the Luhya, who were on the same side during that election. Although this woman had assimilated to being a Luhya, she feared she might be considered a Kikuyu by others and might be attacked by the Nandi. Consequently, for her own safety, she never left her home during those two months.

My wife’s other male relatives are married to women from various tribes. She and I are taking care of a grandson, a grandniece, and three grandnephews. Among these children and two other grandsons we cared for earlier, five different sub-tribes are represented. Technically, they should all be speaking their fathers’ different languages. In fact, the common language for everyone in this region is Swahili, and none of these children is fluent in their tribal tongue.

After the post-election violence in 2008, I gave a presentation at Washington University in St. Louis. After the talk, a young Kenyan freshman came up to speak to me. She had been raised in an affluent family in Nairobi. She said that before the post-election violence, the fact that she was a Kikuyu was a non-issue. Then when the violence erupted, she was seen only as a Kikuyu.

As Kenya becomes increasingly urbanized, more and more people will be using Swahili – or even English – as their primary language. This will put the Kenya classification of forty-four tribes under increasing pressure. Every time the problem of tribalism comes up, someone points out in a newspaper column or a letter-to-the-editor that “Kenyan” is not one of the country’s recognized tribes.

My conclusion is that “tribe” in eastern Africa – like “race” in the United States – is not a biological reality, but rather a social and cultural construct. Unfortunately – again like racism in the U.S. – tribalism can be used for discriminatory and destructive purposes, which sometimes even have deadly consequences.  ~~~

David Zarembka was Coordinator of the African Great Lakes Initiative of Friends Peace Teams for eighteen years. Since 2016, he has continued to support other programs for peacemaking and trauma healing in eastern Africa. He is currently the Volunteer Coordinator of Healing and Rebuilding Our Communities International. He lives with his wife, Gladys Kamonya, and several young family members in western Kenya. To receive his newsletter, contact: davidzarembka@gmail.com