An interview with members of the Quaker Oaks Farm community

On January 12, 2019, Western Friend conducted an interview with several members of the Quaker Oaks Farm (QOF) community. Located in the Central Valley of California, Quaker Oaks Farm is an environmental and cultural learning center that is supported by Visalia Friends Meeting. Since 2013, QOF has hosted annual service-learning camps, which have brought together youth and adults from Wukchumni, Mexican-American, and Quaker communities in the Central Valley and beyond.

Western Friend: So, Eliza, this is kind of putting you on the spot, but you said you had stuff to say about camp. So I really would like to start there. What is camp like? Why do you keep going back?

Eliza Angel: Oh my gosh, there’s so much to say. So my first year, I heard we were going to the beach, and I love the beach. So I came to camp. We would set up the tents, do introductions, you know, fun stuff. And I met so many people. Every time we come to camp, we’re always like a bunch of best friends. And camp is not boring. Honestly, it’s not. As much as we do talk, it’s pretty interesting. 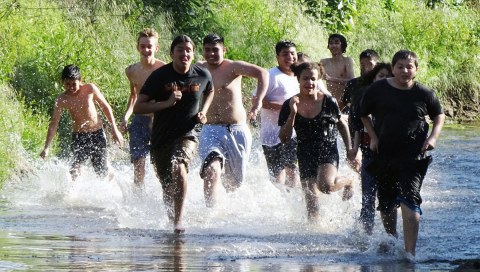 It’s not like school, where they force you to pay attention. At camp. you can just sit there and zone out and still listen, and it’s like you get everything. And the field trips are great. They’re fun. You always learned something. The first camp was about water, right? With the beach trip?

Melissa Lovett-Adair: You know, I can’t remember how it all fit together. But in 2017 we did go follow the water up to the mountains. And we went to the dam at Lake Kaweah. We started by looking at a big map that showed how much of the valley used to be covered by Tulare Lake.

Eliza: And how much it’s not there now.

Melissa: How it’s not there anymore. And then at the little visitor center up there, I walk in, and there’s Darlene with some of the Wukchumni kids, looking at the “historic photos” on display there, and they’re saying, “Yeah, there’s your Uncle Jojo and Auntie So-and-so.” And I just thought “Oh, wow.” These are their ancestors, and they’re talking about them. It really helped to cement for me how much we are on their land. This is their ancestral land.

Mary Lee: What I’ve noticed is about building awareness and  how that ripples out. Sometimes when I’m driving through town, I’ll see something like . .  I went up to Exeter the other day, and on the side of a building, there was a picture of a Native American on a horse, and then there’s a piece of fruit next to him, which made me think, “You know, if I was a Native American, and that was my cultural identity, what would I think about that? How would I feel about that?”

So now, for me, I seem to notice more things that make me think, “Oh, that really bothers me,” or “That doesn’t seem right . . .” But it’s so embedded in our culture. . .  So I’ve been trying to speak up, when I see somebody doing something offensive – not speaking up in a negative way, but just to build awareness for other people, too.

Graciela Martinez Cavasos: When I was young, everyone in the Valley looked so much like me, I never could tell who was Native American and who was Mexican.

But I learned early on about civil unrest. I was working for the AFSC, and they got a bunch of us in 1965 to go and join the march with Martin Luther King, Jr, from Selma to Montgomery. But then James Reeb got beaten to death, a Unitarian Universalist minister. So the AFSC pulled us out of the line. We never made it to the bridge. . .

WF: So, Duncan . . . If you’re willing to be on the spot . . .  If you wanted to invite someone else to come to camp, what would you say to them about why they should do it?

Duncan Lee: Well . . . something that camp did for me was it put me a little bit out of my comfort zone. Because I don’t like going to places where I don’t already know people. But I definitely made some new friends, and I had a lot of experiences that I never had before.

WF: When you say experiences, what pops top of mind? 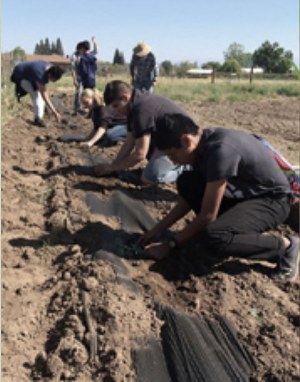 Duncan: Well, the conversations we had. We got into groups in the evening, and we talked about some good questions. Also good was the service project. We planted pollinator plants to attract pollinators that wouldn’t normally be here. The plants also help the monarch butterflies, which are dying out. The pollinator plants give them a place where they can stop and rest and eat safely.

Melissa: And a big part of the project was about creating areas where the soil is covered with native plants that are not so thirsty. And about using drip irrigation. The kids learned how to lay the drip irrigation and establish native plants. In this environment, you have to learn how to live within your means. And our means, as far as water goes, are pretty skimpy.

And, you know, the need for careful irrigation tied into our talks about the dam as well, and how the dam has changed the flow of water and, really, the whole environment around here in a lot of ways. The dam prevents a lot of destructive flooding, but it also prevents necessary flooding and revitalization of the water table.

But now, you know, I have garden boxes. And now we tell plants, “We want you to grow here!” So times have changed.

So this last year of camp, in 2018, we focused on the earth. We did planting, and we took the campers to the rock paintings. The year before that, in 2017, we were focusing on the water, and the drought, and the effects the drought has out here on this land and also the effects in the valley. So we talked about Tulare Lake.

Tulare Lake is not there anymore. And the reason is that, with the dams, the river’s water just doesn’t go there anymore. Everything is dammed up and moved for farming, pretty much all for farming. So we took them up to the dam. They got to see how it works and what’s going on. So, you know, we talked a lot about the water in this Valley. You don’t hear that in school.

WF: Is there something specific? What would you say about the sort of relationship that we need to get back to in terms of water? Us caring for water, water caring for us?

Darlene: Well, for instance, Tulare Lake – people lived there. People lived on the lake. That was where they fished. That was where they gathered the tules. That’s where things were that aren’t there anymore. There is a song that I shared at the camp that we call the Tulare Lake Song. But it’s not an old, old song. It’s an old song, but not ancient. Because it’s talking about: Where is the lake? Where am I going to live now?

So it’s a really sad song, very touching. That’s what the people started to sing. Because the lake wasn’t there anymore. And yeah, it always did sometimes come and go, depending on the rain and snowmelt. But then it was no longer there at all. So that’s just very emotional, when you talk about the people who lived there, the people who fished there. And now nothing. So that’s something specific.

Of course, when we teach the kids, we talked about the four elements of life – the earth, the fire, the air, and the water. We teach that if we didn’t have any one of those things, we wouldn’t be able to exist. So water is very important. Water is life.

Steven Lee: I just want to interject here that all four of those elements, when you look at this place and this time now, they’re all being assaulted tremendously. And this part of the country and the world is probably one of the epicenters of degradation of all four of those elements. And so there’s an imperative on us here to teach and express the importance of those, and how to maintain them, and how to keep them viable . . .

WF: Say more about this being an epicenter of the destruction.

Steven: Well, if you take water . . . Obviously in California we have a drought cycle, which is native to the natural environment. But if you dam the water, there’s this power structure that doesn’t allow the natural cycles. Then, you know, the onslaught of industrial agriculture is a major problem for water – nitrates being leached, nutrients, other things being leached into the water, pesticides, herbicides, other industrial chemicals. And they work together – the chemicals and the power structure. The power structure says who has, who buys, and who owns the water. It gives a false sense of ownership. That sense of ownership allows people to pollute the water if they feel like it.

And that sense of ownership applies to the other elements as well. I mean, talk about the land and the soil. And if you look at our air – We are in one of the worst air quality districts in the United States.

WF: Is this because of the spraying of pesticides?

Steven: You also have dust, and the way that airline traffic flows through the Valley. The Valley is sort of like a basket, and we’re at the end of that basket. So we sort of get hit with all of the stacking of pollutants coming down. Carbon emissions and stuff like that.

Melissa: So that’s where the workshops Steve is doing here are so important. Steve did an incredible workshop, with demonstrations, about how you can grow without pesticides, which was very well attended.

Something else I want to say with regard to water is on a very simple, individual level. The first year of camp, we became aware that some of the kids, especially the kids from Fresno, didn’t feel like it was safe to drink the water. They wouldn’t drink the tap water. They were asking us to buy these plastic bottles of water. We wanted them to be well and healthy, but it made me sick to think about buying those plastic bottles of water.

So during the water camp, every kid got a personal water bottle, and they got to decorate it. And we taught them about why it’s better to use a reusable water bottle than a single-use water bottle. We learned to ask where our water comes from. Well, the water right here comes from the ground, from the well, and we’ve tested it, and it’s safe, and you can drink this water. It tastes different than your Fresno water, because it doesn’t have the chlorine and all that other stuff in it. I don’t know that we convinced everybody. We had a heck of a time keeping track of those dang water bottles.

Eliza: Some kids were trying things like braiding strings and wrapping the bottles with them.

Melissa: So . . .  that’s just a very simple thing. But if the kids carry that home for the rest of their lives, if they share that with their friends, then we eliminate a few of the millions of plastic water bottles that are polluting our world.

The full conversation represented in this article actually covered many more topics than the ones sampled above, including: Native American ceremonies and protocols, synergies between Native American and Quaker cultures, and the history of Quaker Oaks Farm.

To read the complete transcript of this conversation, go to: westernfriend.org/media/water-camp-unabridged-transcript.