Skip to main content
View other articles in "On Cooperation" issue of magazine.
September 2022, October 2022

Uplifted in Witness Together

What stays essential and what needs to change in the Religious Society of Friends? I remember thinking when I was a teen that many older Friends seemed to have lost the ability to listen. Fortunately, older Friends in my own local meeting believed in us young Friends. 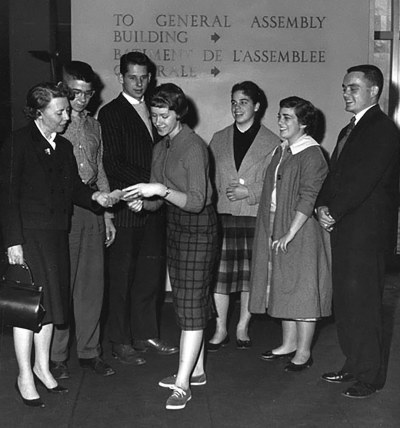 In 1960, six high-school-aged Friends from Pacific Yearly Meeting were sent by their peers, families, and monthly meetings to participate in the Quaker Peace Witness at the Pentagon, held to commemorate the 300th Anniversary of the Quaker Peace Testimony. None of us had traveled much before. It was certainly my first plane flight. Our supportive, trusting parents and home meetings believed in the ability of our small group to fly off by ourselves, stay with Friends far away, and witness in our nation’s Capital, then go on to New York by ourselves to experience the United Nations.

Sixty-two years later, I dug out my tiny journal from that trip. Here is my sixteen-year-old self, Nina Dodd:

Nov. 10, 1960 – Left Sea-Tac with Eddie Hogenauer. Excited enough to be a little woozy. Got to Portland about 10:10 pm. Found Jean Prideaux and Carl Thatcher. Left Portland airport about 10:40. Not troubled or nauseous at all this time. Spokane at midnight.

Nov. 11 – We saw the sunrise and got to Chicago at 7:25. The kids from California and Arizona – Bill Bruff and Alice Newton – will get in at 8:08. Museum of History and Industry from 10-12, then back to the airport. . . Landed in DC about 7PM and was met by Rega Ingleberg, our responsible local adult, and Ann Houghton, one of our host families. The Hadleys, our other host family, came and got us girls after we danced a polka around the room awhile.

Nov. 12 – Went to Florida Street Meeting, registered, divided up in groups to go to street corners and distribute literature about our Peace Witness at the Pentagon. . . We offered fliers for about 2-3 hours. . . Some crazy reactions to my offering leaflets: One man took it and started to read when his wife said, “Don’t read it! It is about peace!” . . . One man asked me where I was from. When I told him I was from Washington State, and he said, “Oh, you mean the other side of the river?” I was amazed he hadn’t heard of the State of Washington.

In the evening we listened to a talk on “The Historical Basis for the Peace Witness.” I thought the speaker sounded like someone trying to save our souls, and I didn’t like his tone, but admit he had some good points.

Nov. 13 – Breakfast, then we waited for John Houghton to come pick us up. About 9, we called them, and found they had forgotten us. Abby Hadley took us down to the Washington Hotel, and we joined the Peace Walk. When we got to the Pentagon, we spread out until we reached around three sides of it. We were amused that the police were arrayed on the steps of the Pentagon to protect it from us. I was shocked by some negative things people yelled at us while they were driving by.

We stayed at the Pentagon until 12:00, grabbed lunch, came back for our vigil shift from 2 to 4. It was cold.

That evening, . . . we had a good discussion at the meetinghouse till 11:30 about the Peace Corps, which Kennedy proposed. We finally found transportation with some of the local young Friends to our host family. Even though we had the address, it was awful hard to find. . .
It was after 2 AM when we got to bed.

Nov. 14 – Got up at 6:30, raced to get dressed, down to the Pentagon, and on Vigil until 8:15. Went with a Friend to Capitol Hill and talked to Senator Morse’s administrative assistant and his research secretary. Very nice people. Got a bunch of material. Talked about Peace Corps, China. . .  Back to the Pentagon line from 1:15 to 3:30. Took the bus to the meetinghouse for the Evaluation Meeting, 4:30 to 6:30. I was expecting to feel closeness at that meeting . . . and when it didn’t happen, I felt greatly disturbed.

Nov. 15 – [With FCNL support, we met with aides to three Congresspersons.] . . . That evening we wrote a letter to the editor of the Virginia Sun, who had provoked us by misrepresenting facts about our Peace Witness.

Nov. 17 – On to New York by train and found the Quaker-run Pennington Hostel, where we were staying. . .

Nov. 18 – Took a bus to the end of Broadway, walked to the UN, and talked to a UNICEF representative about the donation we were making, which was collected in Phoenix at Halloween (arranged by Alice Newton’s mom). On a guided tour of the UN, we got to see the Security Council room, the General Assembly room, and the Trusteeship Council. We also visited the Chapel of Silence.

That evening, we went to the Radio City Music Hall; Rockefeller Plaza, where we went ice skating; took a subway to Greenwich Village and ate at an ice cream parlor there; then back to the Pennington for bed at 3 AM.

Nov. 20 – Our flight home. Said goodbye to new friends. Took off at 9:15. Beautiful day. Looked out window some and then went straight to sleep.

When I woke up, white puffy clouds were right underneath. A stewardess asked us to fasten seatbelts since we would land in Chicago soon. . .

Woke up as we were coming into Portland at 8:45. Left Portland at 9:10. 45 minutes to Seattle. It was snowing!  Mom and Dad met me there. Talked all the way home.

2022 – As I read through pieces we wrote during the months that followed that adventure, I notice all six of us young Friends felt supported, inspired, and uplifted by being with so many other Friends who shared our concerns and by making our witness together.

The cross-country travel, the Peace Witness, the visit to the UN – all made me feel ready two years later to travel far away from my West Coast home to Earlham College. Those early experiences as a young Friend then led me to more involvement in the work of Friends. I was sent by my two meetings (University Friends in Seattle and Clear Creek Friends in Richmond) to serve as a delegate to the Friends World Conference in Greensboro, NC, in 1967. I joined the Quaker Pilgrimage in 1970 on the way to Sweden, where I attended the Triennial Meeting of the Friends World Committee for Consultation. All these experiences created in me a feeling that I had become a member of the world family of Friends. For sixty years, this feeling has stayed with me, through many years of work in Pakistan and several projects with AFSC in Afghanistan. Even as I gather strength from being part of my local Corvallis Friends Meeting, I feel at home and in community with Friends and other people all over the world.

It seemed to me at the time I wrote this journal that older Friends in worship or business sessions sometimes lost the way of settling in silence, listening to each other, and feeling deeply connected in the Spirit. Today I see young people looking at many of our meetings and finding them to be aging and stuck, rather than engaging. I’m an older Friend myself now, and I admit that I don’t always sense clear leadings on how to carry forward today, maybe because I have less energy, maybe because I am not as much involved in the life of this era.

But if we older Friends can’t sense how to be relevant now, one thing is clear: Supporting our current young Friends in working on their concerns is crucial for the future
of our world and our Religious Society of Friends.

Nina Joy Lawrence continues to mentor after a career in counseling followed by twenty years of teaching Focusing, a community wellness practice. She is a member of Corvallis Friends Meeting (NPYM).