Skip to main content
View other articles in "On Bosses" issue of magazine.
July 2018, August 2018

Unite for Dignity and Respect

It’s 7PM the first time I answer the phone. “Hi. My name’s Amy,” I hear on the other end, “I’m calling because we need a union at my clinic.”

For twenty years, Amy has worked as a radiology technician at the San Luis Obispo Diagnostic Center, a local, outpatient, imaging center. Amy was generally happy with her job taking care of patients. Then one day, the doctor who owned the clinic decided to sell it to Dignity Health, a statewide corporation.

Changes started happening fast. Staffing was cut, forcing Amy and her coworkers to work shorthanded. The new director of the clinic was condescending and rude: when Amy and her coworker Michelle went to him to address a concern about patient care, he dismissed them out of hand.

On top of all that, no one at the clinic had seen a raise in three years. Whenever Amy or Michelle asked about wages, they were given a corporate run around: unanswered emails and phone numbers that lead nowhere. 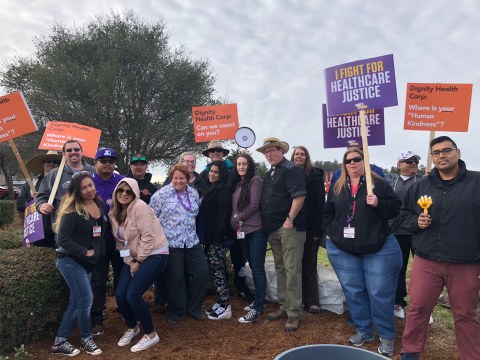 I graduated from a Quaker college just a few years ago. Most people my age don’t really understand what unions are, beyond a vague idea that they once promised higher wages. That’s a shame, because we need unions now more than ever. As Quakers, we are called to witness that of God in everyone. In the wider world, we are taught to do the opposite. We are taught to value others only insofar as that helps us get ahead. Unions can change that. As one organizer said when he spoke at my college, “Organizing is the way of saying to the powerful, ‘I just want you to know that we are related.’”

Amy and Michelle knew about unions because a nearby hospital was unionized. They called me because I work as an organizer with SEIU – Service Employees International Union. When I met Amy and Michelle for the first time, they expressed concerns that I hear all the time: What good does it do to form a union? Will joining the union really make our wages better? Won’t you just take my money for dues? Will joining the union put my job at risk? For several months, I supported Amy and Michelle as they wrestled with these questions, and then I supported them as they slowly persuaded their coworkers to join them.

On the surface, the most important issue to the clinic workers seemed to be pay. But once we dug deeper, we found that what really motivated the workers generally – and Amy and Michelle especially – was their desire to be treated with dignity and respect by their bosses. Management constantly disrespected Amy and Michelle because they viewed them as resources, whose labor they could extract for money. Amy and Michelle believed they were worthy of being treated like human beings. Once we all understood that, everything else fell into place. Ultimately, only one person in the clinic voted against joining the union.

The power of a union lies in helping us realize that, no matter how rich or successful your boss is, if you don’t show up to work, your boss literally can’t run the company. With a strong union, we have the power to win changes we could never win on our own. Because of this power, right-wing politicians and business owners have engaged in a concerted effort over the past forty years to destroy unions in the U.S., culminating in the Supreme Court decision in Janus v AFSCME, which will likely bankrupt public-sector unions.

Amy and Michelle’s story is the mildest story of union opposition I’ve ever heard. Normally, when workers try to form a union, bosses will do everything to stop them – from forcing workers to watch anti-union propaganda to firing union activists to outright violent coercion.

I hope Friends will lend their love and life to all workers who struggle to form unions and maintain them. We have a long and rich tradition in our faith of confronting injustice and standing radically on the side of the oppressed. It may feel confrontational to take on your boss and demand to be heard, but such conflicts are the growing pains of a world where we strive to walk cheerfully over the Earth, answering that of God in everyone.  ~~~

Kiernan Colby is an internal worksite organizer for SEIU. A convinced Friend, he graduated from the Quaker Leadership Scholars Program at Guilford College and has been active with FCNL, among other Quaker organizations. He attends Santa Cruz Friends Meeting (PYM). You can follow him on twitter @kiernancolby