[This text has been excerpted from the author’s upcoming book, An Unfinished Revolution: Edna Buckman Kearns and the Struggle for Women’s Rights (Albany: State University of New York Press, 2021).]

“Traitor. Sissy,” hecklers bellowed as the women’s demonstration inched forward. Men marchers and women students from Howard University, an African American private university in the nation’s capital, stood out as targets for taunts, assaults, and accusations. From the moment my Granddaddy Wilmer Kearns took his place in the men’s division on Pennsylvania Avenue, he sensed the resistance and pushback. The women called it a “procession.” Others called it a march or demonstration. My grandfather said he hadn’t expected the opposition to have such a presence. He said resistance to women voting wasn’t new, but Black activists and men marching in public to reach a national audience in support of the expansion of civil rights – this was unprecedented.

My grandfather said he sensed attack from all sides, from so many pushers and shovers on the sidewalks, spilling into the street, to internal conflicts within the parade organization. One reaction was ingrained in him, as it was for many men, to respond to opposition with force. He’d promised the parade organizers, however, that if he marched in the men’s division, he wouldn’t exchange violence with violence. This was basic in Quaker faith and practice, exactly what I’d been taught.

The parade problems piled up. Word spread about white women from Southern states threatening to withdraw if a contingent of students from Howard University marched down Pennsylvania Avenue. After this threat, Granddaddy Wilmer told me he’d heard word from other marchers about attorney Inez Milholland’s warning. She’d refuse to ride her horse, Gray Dawn, at the front of the procession if the Howard University students didn’t participate. The situation became clearer.

My grandfather called it a “paper trail.” This meant assembling a record, an archive, proof of what later could substantiate patterns. “When things seem tough, Quakers become a ‘witness.’” Granddaddy showed me what Edna had preserved in writing in the South Side Observer, published on March 14, 1913:

Down in Washington, I spoke to Miss Alice Paul, chairman of the parade committee. She is a Quaker, a Swarthmore College girl and suffered imprisonment in Holloway Jail [in England] six weeks, undergoing a hunger strike. Miss Paul said that when Rosalie Jones and her hikers reached Washington, she realized that the parade would need more protection than they at first supposed, so she went to President Taft, who referred her to Secretary of War Stimson. Mr. Stimson, who is an openly acknowledged anti-suffragist, refused to provide troops, but said if there was any disorder the troops would be sent out. I understand the troops from Fort Myer were called out, but I saw six men on horseback mowing the crowds down, and after they had passed by, instead of the policemen keeping the crowd back, they allowed them to fall right back again. I must confess I thought troops meant soldiers, but I have much to learn . . .

If Edna admitted she had a great deal to learn, I was right there with her in what I needed to understand. Granddaddy said that Quakers played an essential role in standing up for peace when strident patriotism pressured usually calm people to become aggressive and occasionally violent. He told me: “Concerned people must stand firm and make sure peaceful tactics are kept alive.”

Oh, that’s how it works, I thought. I tried not to react when Wilmer told me about onlookers spilling out of taverns and saloons anxious for a confrontation. Granddaddy said that those like himself in the men’s division took twelve steps along Pennsylvania Avenue and then stopped, followed by fifteen steps, and then fifty before waiting again. The district police didn’t control verbal abuse from the sidelines. And without specific orders from their superiors, many police officers stood off to the side, passive. The marchers started out four and six abreast. Within several blocks, hostile crowds closed in again on the avenue, and they bumped up against the protesters. “Do you boys expect your mommies to change your poopy diapers? They’re more into voting than punishing traitors like you.”

Granddaddy winced when telling me this, adding that he’d never been in such a tight space with no exit. At least he wasn’t reluctant to say that everything didn’t always turn out in a predictable way. He said the crowds on Pennsylvania Avenue were like branches with barbs surrounding him in all directions. Critics jostled them with their shoulders, mouths open, spitting and spewing words of contempt and sarcasm.

“I could barely breathe. I had to do something,” Granddaddy said.

“Will you she-men have dinner ready at home?” the street venting continued.

“Hurry and get out of there as fast as you can,
Granddaddy,” I sputtered. I felt my own defensive reactions building up inside me. Would the marchers get out of Washington, DC, without being attacked? And what about the students from Howard University? Would they survive pushback from the sidewalks? And would the parade organizers straighten out this mess?

“The women marchers, across the board, didn’t roll over easily in the face of resistance,” Wilmer said. “I had to respond. So, I hissed.”

“The women must have been sick and tired of demanding their rights,” I told my grandfather.

“I was sure the parade would end badly,” he said, “but I couldn’t do much about it, penned in as I was with the men.”

“But Granddaddy, you were a witness.”

“Thee is right,” he responded. This was typical of us, with Granddaddy speaking in Quaker plain speech while I responded in conventional conversation.

My grandfather told me that men over glasses of port predicted the women’s march wouldn’t add up to more than a few attention-seekers performing in public for newspaper reporters. Inside barrooms, parlors, and drawing rooms all over the nation’s capital the night before the parade, the resistance accelerated. As dawn arrived on March 3, 1913, thousands of protesters arrived at Union Station, the city’s train terminal, from all over the US and other parts of the world. Wilmer, Edna, and little Serena were among them. Some put the total of procession participants at five thousand. Area newspapers published figures as high as ten thousand individuals determined to attract attention to this demonstration of women’s public power.

“Sure, the drunken mobs howled,” Granddaddy told me. “They threw burning cigarettes and matches at us men. Those sluggards were roaring drunk and furious, while I sweated in the freezing March air and didn’t stop hissing.”

“Politics is a filthy business. Go back to the kitchen, girls,” one of the street critics shouted. “Henpecko.” My grandfather bit his thumbnail when telling me this. It wasn’t the kind of story grandchildren liked hearing. The narratives led back to Edna, and I was learning how to be quick on my feet. I couldn’t wait to hear about the day Edna purchased her wedding dress. And unless Granddaddy expanded the tale again, I could still be waiting until Labor Day to find out about the wedding dress.

The Kearns family had arrived on the train from New York City the morning of March 3, 1913, to join those filling the Washington, DC, streets with march participants and their delegations, floats, bands, horses, automobiles, and banners.

Wilmer stood straight in the parade formation with the other men, on edge about responding to the street opposition. Only the cavalry’s arrival from nearby Fort Myer broke up what might otherwise have turned into a full-scale unmanageable protest.

“Saved by the liberty bell,” I said in my most grown-up sixth grade voice, and my grandfather made a face before moving to the end of the story.

“Finally, we men moved ahead on the line of march,” Granddaddy said, emphasizing that he shouted, “Get out of our way.”

I had no idea that the 1913 women’s march on Washington represented a major turning point in the votes-for-women campaigning. I wasn’t familiar with the symbolic significance of such a high-profile demonstration in the heart of the nation’s capital and how it would impact the strategic and tactical decisions of other protesters in the future. I didn’t realize that this particular event in Washington, DC, was the first large protest of women in the nation’s history. Until then, Wilmer and Edna had joined with smaller versions of suffrage marches prior to 1913 in New York City. This was news to me.

This demonstration of women’s power was significantly different in size and significance than ever before. Organizers scheduled the parade for the day before US president-elect Woodrow Wilson’s inauguration. Some observers went so far as to claim the women upstaged the incoming president. 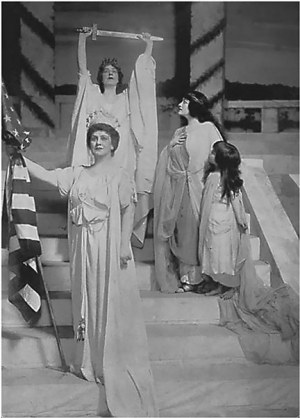 Some suffrage supporters believed only white women should vote and the process of reform should be confined to a state-by-state effort, instead of being shifted to a national level. Others insisted that all women should vote, period. Many, like Edna’s friend Bess, were of the opinion that the entire social system should be abolished so women could start over. I realized only later how much polarization haunted early women’s rights activists. And the day of the parade in Washington, DC, the polarization was close to the surface. The so-called national suffrage movement didn’t speak with one voice, and my grandfather made a priority of drilling this into my head.

“Did those on the sidewalks tell Edna to go home and take care of her husband and daughter?” I asked Wilmer.

“It was unusual to see a child like Serena at protests,” he said. And it had also been a shock for Americans, he added, to see Black women as well as men in the lineups.

It took me years to realize that joining with the men’s division was excellent preparation for my grandfather’s involvement in other women’s rights activities. He told me about one photo documenting his involvement in a New York City suffrage parade in 1913, although I didn’t discover it until many years later.

Edna’s writing style when describing the parade was relaxed and formal yet opinionated. And it seemed directed at me so I could understand. Edna had this to say about the large women’s procession in early March of 1913:

Those of us who marched in the Friends or Quaker division wore the Quaker bonnet and garb. Spectators tried to pull our capes off of us, the policemen laughing at their crude remarks and actions. . . My little daughter’s face was not slapped but sapped by drunken men all along the line. They also pulled at her bonnet, and not one policeman I spoke to paid any attention. . .

Mr. Kearns marched with the men’s league, and he said that if the men had not had instructions from the parade committee to be dignified, not to talk or resent insults, that there would have been a riot, for it was all our men could do to keep their hands off the crowd. They were fighting mad, with many declaring the next day that they believed in militancy.

Imagine my horror the next day at hearing my husband Wilmer hiss the chief of police, Major Sylvester, and all the men around me also began to hiss him. I understand he was hissed all along the line . . .

Our women, through it all, were quiet and orderly. They marched in silent dignity.  ~~~

Marguerite Kearns is an award-winning journalist, teacher, story-teller, and Quaker. She is the granddaughter of women’s rights activists Edna B. Kearns and Wilmer R. Kearns, and now lives in Santa Fe, NM.