Skip to main content
View other articles in "On Words" issue of magazine.
November 2021, December 2021

“Before going into unfamiliar arid country,” the late Jim Corbett wrote, “study maps that show the location of water.”

Corbett was an Arizona Friend, who wandered the vast Sonoran Desert, and knew whereof he spoke. Although he wore thick glasses, he had a keen eye, not only for critical water sources, but also for spotting gritty, life-saving metaphors. He put much of this hard-won discernment into his first book, Goatwalking, which came back into print this summer after a thirty-year hiatus. 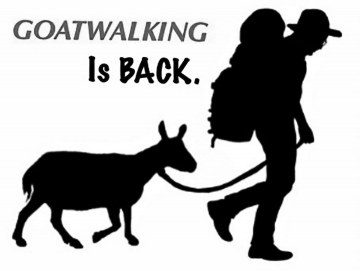 I’m one of Corbett’s readers who feels like much of our culture today is built on seemingly ever more information, but less and less sure guidance. Corbett shared a living metaphor for this: “Grazing-permit maps . . . will indicate most waters, including temporary springs and seeps . . . but inaccuracies of one-quarter mile or more are common on the Forest Service and BLM maps, so don’t put all your faith in them – or in anything else.”

That was not hyperbole: “Life on the desert is always for real,” he writes. “Little mistakes can be fatal.”

As many Friends know, Corbett did more in the desert than tend goats. Raised on western ranches and Indian reservations, Corbett finished college in three years, took a Harvard masters in philosophy, then returned West to a patchwork career as cowboy, librarian, desert guide, and seeker.

This path took a sharp turn when the Central American wars of the 1980s brought turmoil to the border region. The conflicts sent desperate refugees fleeing torture and massacre, only to face equally lethal threats of death by thirst or heat in the desert.

Corbett soon felt leadings to help. He co-created an epic sanctuary movement that brought thousands of desperate war refugees to safety. He did this not to disobey the law, but to uphold U. S. laws the government was itself defying daily.

Amid this witness, Corbett’s path took a surprising detour. Long a humanist liberal Quaker mystic, he had given little thought to traditional Christian theology. But fluent in Spanish amid the refugees, he was surrounded by people for whom the richly pictorial spirituality of Catholicism was second nature. “The peoples of the cross I was meeting turned the world as I’d known it inside out and upside down,” he wrote.

“In meeting and knowing the church as a living, visible people of peoples. . . I decided to seek formal membership in my [Quaker] meeting, in order to join the [larger] church. . . Confirmation came mostly through conversations with my close friends and coworkers, Father Ricardo Elford, a Redemptorist priest in Tucson, and Father Dagoberto Quiñones, a parish priest in Nogales, Mexico.

“That they would . . . share the work of the church with me, as equals, was itself the confirmation that led me to seek formal membership in my meeting. I’d always thought of Catholic priests as the professional guardians of official doctrines and rituals, perennially at odds with the prophetic faith and Quaker heresies; but these two priests – and others I soon met – turned out to live as prophetically as anyone else I’d ever known and to judge all doctrinal professions and cultic practices by the overriding criterion for church membership that Jesus proclaims: ‘Lord, when did we see you hungry and feed you, or thirsty and give you drink . . . ?’”

Metaphorically and literally, Corbett was finding water sources in “unfamiliar arid country” that were new to him, and clearly life-giving, and he knew what to do with them.

“Am I converting to Catholicism, then?” He wrote in a notebook from 1981, “Well, not in a sense that would make me less Quaker. I’ve been discovering the Catholic Church, not by studying Catholicism but by meeting Catholics. Whatever our creedal differences, we meet as one people by virtue of our allegiance to one Kingdom. And my discovery is that the church is truly catholic, a people of peoples, incorporating not only a multiplicity of nations and cultures, but also divergent beliefs, rites and perspectives. . .”

Thus, the sanctuary movement became more than a nonviolent civil struggle. Soon Corbett was delving into and remixing Catholic, Protestant, and Jewish theologies, along with biblical study, and Quaker peculiarities and traditions.

After the sanctuary struggle crested, Corbett went back home to the desert. Beyond the social crises of the 1980s, he also clearly foresaw the coming climate and resource calamities, and he sought to plant seeds for a “peaceable kingdom” alternative in wilderness places like the Sonoran Desert.

“I have a confession to make,” he says in Goatwalking, “I want my grandchildren to learn how to goat walk . . .  I’m a survivalist where they’re concerned. Industrial civilization has destabilized the earth’s climate beyond the point of no-return. The fair-weather agriculture on which our civilization depends is doomed. In the course of the next century, much of North America will probably become desert. Even if it doesn’t, annual rainfalls and temperatures will fluctuate too wildly to sustain the agricultural systems on which we now depend. If humankind doesn’t self-destruct, my grandchildren will have to get along without industrial agriculture as it now exists. Maybe a more sustainable industrial adaptation will emerge, but I want them to know enough to survive the old-fashioned, nomad way, in case that’s the viable choice.” 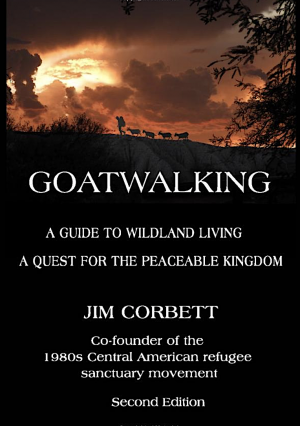 Not that he wrote a handy Ten-Point Fix-It Program. Rather, he wrote, “Goatwalking is a book for saddlebag or backpack – to live with a while, casually. It is compact and multifaceted, but for unhurried reflection rather than study. It is woven from star-gazing and campfire talk, to open conversations rather than to lead the reader on a one-way track of entailment to necessary conclusions. I prove no points. This is no teaching.”

He was too modest. The book is like that long-hidden spring in an increasingly unfamiliar arid country. Certainly, few Quaker activist-thinkers have combined so much advocacy with such an informed, deeply reflective, desert mystic’s temperament and wisdom.

In fact, that was half of what Corbett included in a brief epitaph he wrote for himself: “opened a desert spring.” The phrase is engraved on a small memorial plaque mounted in the desert where they scattered his ashes in 2001. He really had done that, and he knew such springs give life.

In Goatwalking, now back in print, he’s done it again, for Friends and others. It’s both timeless, and just in time. ~~~

Chuck Fager is a Quaker writer, blogger, and retired activist. He is a member of Spring Friends Meeting in North Carolina, which was part of North Carolina Yearly Meeting for 250-plus years, until that body self-destructed in 2017 as part of the current religious culture wars. Chuck’s book Murder at Quaker Lake tells the unhappy story.

NOTE: Goatwalking is available from Amazon in paperback and as an E-book. A new Discussion Guide is also available online at goatwalking.org, where it can be downloaded free.