I found myself in the south of England recently for work. Saturday night, I learned with both amusement and envy that within a half hour’s drive of my hotel, there were four Quaker meetings to choose from. Of the closest, I picked the one that I thought would be smaller, more of a country meeting. 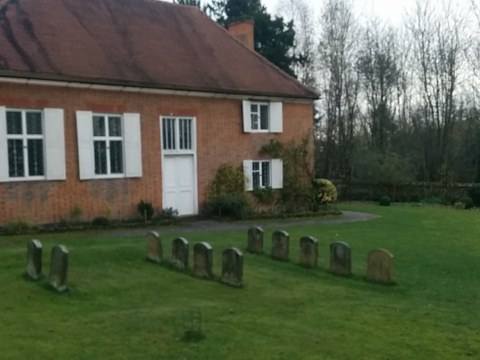 High Wycombe Meeting worships in an old, red brick house on a main road in a residential area. A big sign on the front lawn welcomes everyone, as usual. When I arrived, a small group of Friends in the entryway greeted me warmly. Maybe I was expecting to step into the nineteenth century, but their meetinghouse felt modern and familiar. We all agreed, tongue in cheek, that amongst my choices, I’d come to the right place. About twenty of us gathered together that day for worship. The meeting room took up the entire front of the old house, which wasn’t merely a hundred years old like I had imagined - it had been built in 1700.

During meeting for worship, my eyes were drawn to the wooden table in the center of the room. It held a British Faith and Practice, a Bible, and a vase with flowers. It was carved with an inscription, “Old Mtg House,” and with a date from the 1600s. Somewhat poignantly for me, a Friend read the Queries on Peace during meeting. I’d been thinking about them since hearing them read in Pasadena two weeks earlier. It was as if they had followed me across the world.

I decided to stay for High Wycombe’s business meeting and find out what modern British Quakerism is like. The members of the meeting are politically active: one member serves in the local government, and a report was given by a few who had just met with their member of Parliament – whose views they had respectfully challenged. The issue on everyone’s mind that day was the plight of the Syrian refugees. The meeting had taken a lead in acquiring, storing, and shipping essential supplies to refugees in Greece. They were also working with refugees who had settled nearby in England.

After business meeting ended, I stayed and talked with Friends for a while. When I mentioned how historical their meetinghouse was, compared to ours in Pasadena, which was only a hundred years old, they asked if I had been to Jordans. “You haven’t heard of Jordans?” the clerk asked, somewhat astonished. “It’s a smaller, older group who meet there, but the burial ground is the Quaker Westminster Abbey. You must go.”

Having nowhere else to be, I walked downtown, bought some “chips” for lunch, and took a cab to the nearby village of Jordans, named after old Jordans farm. “Its a church,” I told the curious cab driver, as he dropped me in front of what seemed to be a very large, empty cottage in the middle of the woods. I got out and read the plaque on the brick wall, “Jordans Quaker Meeting House, 1688.” 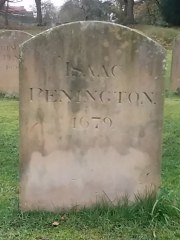 It was mid-November, and the leaves had left the trees. The landscape reminded me a bit of the Virginia winters I grew up in – groves of trees standing cold, damp, and stoically still. I had arrived after meeting for worship had ended. Surely thousands of people visit Jordans Meeting every year in search of history, but because I seemed to be there alone, I felt as if I had discovered this place lost in the wilderness.

A large, modern extension had been built onto a little brick building. The door to the new wing was open, and I found some local folks inside who were there for a lecture. They told me the old meetinghouse was closed.

When I said that I was a Quaker from Los Angeles, a woman suggested that I would probably like to go around to the side of the building to see the headstones. “There’s a Mr. Penn all the Americans want to see,” she said. Then she turned to ask a colleague, “Was it John Penn?”

I thanked them, walked slowly around the outside of the meetinghouse, and entered a small grassy plot where about a dozen headstones stood, lined up neatly in rows. They were very plain and clearly very old. William Penn 1718, Isaac Penington 1679, Thomas Ellwood 1713. The names and dates stunned me. “Oh my goodness,” I murmured a few times; then I fell silent. This was one of the places where it all started. George Fox used to frequent this meetinghouse, although he wasn’t buried there.

A second, larger burial ground is set on a nearby hill. I walked up the short path, then smiled as I entered the graveyard, because the headstones were all arranged in concentric circles, facing one another. I walked around, reading names and dates; the oldest were from the 1920s. I sat down on a bench, among these more modern folks, and looked toward the older burial ground, visible down the hill. It was gray and cold, and I had that feeling again of being alone in the middle of the woods. 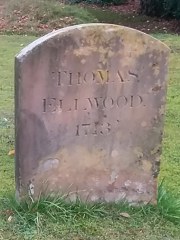 I sat there, alone yet not alone, for what seemed like a long time, trying to take in the magnitude of the history of that place. I wondered who these ancient souls had been, how they had suffered, and whether I had any real relationship with them. We were from such different eras and our worlds were so very different – the issues, the ethics, the religion. Was there even a common thread?

Eventually my questions left me. I sat there, empty but content on my chilly bench, and my heart started to flutter as if I were about to minister – but to whom? And then I realized I wasn’t being called to speak; I was being spoken to. An understanding came to me. If these ancient Friends could have said one thing to me, a message that could cross the centuries intact, all they would have said would have been: “Let the Spirit in.”

It was that simple. Live in the Spirit, and let the Spirit work through you. I’d heard the words before, but they had never been delivered this way, so that I could grasp their meaning so deeply. All of this history was about the aspiration for personal revelation and the aspiration to live in that state freely. Letting the Sprit in is even the basis of the Peace Testimony, which I had been carrying in my thoughts for weeks. Fox didn’t argue that he abhorred war; he argued that the Spirit would never compel him toward it.

I finally went back toward the meetinghouse, then stopped again for a few minutes on a bench in the older burial ground. Sitting there – among the likes of Penn and Penington and Ellwood – I felt tentatively that, in spirit if not in stature, they might accept me as a peer. 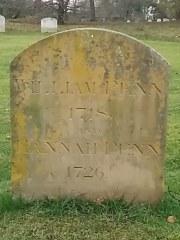 When I went back towards the building, I met a woman named Janet there, who said she was a member of the meeting. When I introduced myself as a Quaker from California, she said she could give me a tour. She began by pointing out that that even though there are only a dozen headstones in the lower burial ground, it is actually the resting place of nearly four hundred early Quakers. The plot had been purchased before it was legal to practice Quakerism, at a time when Friends were prohibited from being buried on church grounds because of their heretical beliefs. It wasn’t until the Catholic King James II issued the “Declaration of Indulgence” in 1687 that Quakers were finally permitted to worship openly. Then they built the meetinghouse next to the burial ground. Before then, George Fox, James Nayler, and others used to hold meetings in the kitchen of Jordans farmhouse, just up the hill.

Jordans Meeting’s meetinghouse had been a well lived-in country house as well as a place of worship. It had a big stone fireplace in the kitchen and a bedroom upstairs. For committee meetings, Friends cleared the kitchen table or pushed beds aside to make space. Janet led me through a small doorway into the meeting room, which had wood paneling on all sides and was naturally lit by high windows. The benches were arranged in an unmistakable inward-facing square formation, with a raised Elders’ bench at the far end of the room. Somewhat uniquely, the floor was not wood, but laid with red bricks. Janet left me to go back to the presentation she had come to the meetinghouse to attend. Again I was alone, this time on a bench in the old meeting room.

We never told my Jewish grandparents before they died that I had joined the Quakers. There was no point in rocking the boat. In my family, it just wasn’t the kind of thing grandparents needed to know. My parents were surprisingly understanding when I first told them, saying they did their best with what they knew as they raised us, and that they expected us as adults to make our own choices. But occasionally, my parents would let slip accusative questions about why I had “rejected my upbringing.” I never gave complete answers to those questions. 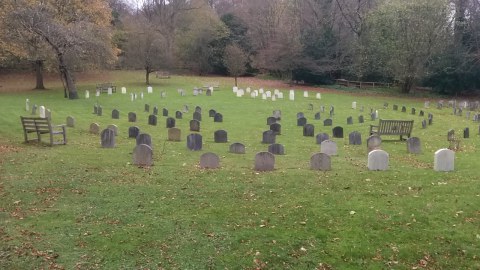 Though I didn’t want to offend my parents with my answers, it may be that in fact I had only considered them theoretically or philosophically. Sitting in the meetinghouse of Jordans Meeting, I was sitting among the very people who had founded the tradition I’ve come to follow. The old question of why I had chosen this faith rose up in me again.  This piece of land was not so much the place that the early Quakers had chosen to call home as much as it was the place to which they had been banished, all those centuries ago. Seeing their fate through my own eyes now, it finally came together for me that I was a kind of heretic, too – like them. And as I had first hoped as a young man to settle some day among kindred spirits, it became clear to me that now I had. I was one of them.

I sat in the meeting room for a while, imagining ministry from Isaac Pennington, George Fox, and others, which once filled this room. But I didn’t need to hear their historical words. I realized then that it is the voice of the living Spirit yet to come that I should seek and anticipate.

With a sense of stewardship, I turned out the lights and closed the doors. I left with a feeling of gratitude for this humble yet powerful place, and I began trudging through the grass up the narrow country lane toward the village, past old Jordans farmhouse. It wasn’t lost on me that I was literally “walking cheerfully over the world.”  ~~~

Steve Rosenbluth first joined Sarasota Florida Monthly Meeting in 1991, and is currently a member of Worship and Ministry Committee at Orange Grove Meeting (PYM). He and his wife have two small children who are cherished by Unity of Meeting.