Some call this place the Holy Land. Some call it the Middle East, some Israel, others Palestine. At the Qumran archeological site in the West Bank, the chalk cliffs are steep and rugged. Yet the desert light brings out delicate hues – buff, pink, peach. The land shimmers in the heat, very much like the desert land of my home near Tucson, Arizona. Both places hold the steady vibration of an abiding, sacred Presence. The air is still, breathless, as if ancient wisdom awaits the return of faithful people.

In July 2017, I joined Max Carter, Jane Carter, and eight other people for a work camp in Palestine, sponsored by Friends United Meeting (FUM). In November 2017, I joined the School of the Americas Watch (SOAW) – along with five hundred people from all across the United States – to witness for justice at the border wall that separates Nogales, Arizona, U.S.A., from Nogales, Sonora, Mexico. Both the West Bank and Nogales are places that carry a sense  of patient waiting. Both are places that knew no borders until recently. Native peoples have trekked both areas for centuries, trading goods, some settling in communities, many mingling to make these lands their homes.

I am a transplant to the desert home that I love, and I’ve always appreciated the welcome and hospitality I’ve felt from people of the border. I have always been aware that community makes living in the desert possible.

During our FUM work camp, I felt a similar sense of welcome from the desert people who live in the West Bank, from Israelis and Palestinians alike. We arrived there during the last few days of Ramadan (something like showing up with ten friends on my mother’s doorstep on Christmas Eve). Our little group of pilgrims was blessed by a constant flow of nourishment – of body, heart, and mind – from all the Muslims, Christians, and Jews we encountered. This steady supply of simple hospitality stood in sharp contrast to the harshness of the ongoing military occupation that surrounded us. 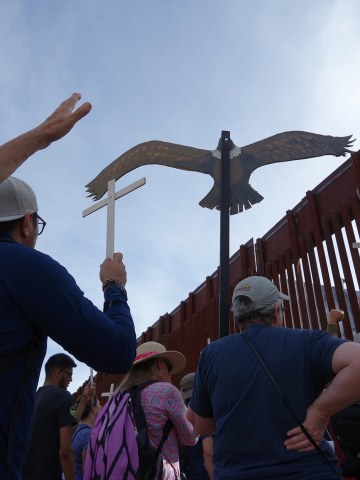 The U.S. Southwest has undergone a similar militarization, turning that land into an occupied territory also. The parallels are stunning. The brutality of the walls – concrete, steel, iron, razor wire, machine gun nests, watch towers – and armed forces at every check point impact everyone on all sides. The expressions of patient endurance on the faces of Palestinians and Mexicans are similar, as common people try to pass through checkpoints to shop or go to work or get medical care. The expressions of watchful mistrust and boredom in the faces of Israeli Defense Force soldiers and U.S. Border Patrol agents are similar also.

The men and women with guns who guard these borders are taught to regard the traveler as “other.” In Palestine, both Palestinians and Israelis spoke openly about the moral injury felt by all citizens, brought on by the deep level of mistrust among all groups and by the widespread habit of objectifying the “other.” The people organizing for justice and peace spoke of witness as key to their soul repair.

In Palestine, we walked the ancient streets of Hebron. The grey stone buildings spoke of endurance. But the streets are sterile now, a ghost town. Israeli settlers have illegally driven the Palestinian residents of Hebron from their homes and shops. Even so, I could imagine a time, not so long ago, when Hebron was a city vibrant with spicy smells and the ringing clamor of markets and trade.

A young Israeli veteran walked those streets with us. He spoke of standing guard there while Israeli police officers expelled Palestinians from their homes. He spoke of watching the terrible loss of life and the escalation of violence, of doing nothing, of being complicit. The grief he shared was devastating.

Our Friends in Palestine gave us some messages to share with Friends in the United States. First, we all love the same God. We are all brothers and sisters, grafted together like one amazing tree through the love of God. Second, they ask Friends in the United States to stand alongside them as they work for peace, justice, and reconciliation. Their traditional conflict resolution practices are slow, deliberative, and practical, led by elders in their communities. The process is rooted in Abrahamic law, which is shared by Muslims, Jews, and Christians. Palestinians ask us to support it. They ask us is to be pro-peace, neither pro-Palestinian nor pro-Israeli. They urge us to support the Boycott, Divestment and Sanctions movement, because it has been the most effective avenue for enabling the world to speak to the Israeli government in terms they understand.

During the SOAW Border Encuentro, I attended workshops, marches, and vigils. I prayed with five hundred people, standing on both sides of the wall that runs through Nogales, committing ourselves to nonviolent resistance to war, racism, and oppression. I was moved to tears by the words of Ray Bourgeois, a founder of SOAW, as he spoke of the torture methods the U.S. exports to other countries through the malicious education efforts of the U.S. School of the Americas.

As Friends, our own organizations can guide us in our resistance. We can join FCNL in opposing the ballooning Pentagon budget, in promoting diplomacy in the Middle East, and in crafting comprehensive reform of U.S. immigration policy. We can join AFSC in any of its campaigns: Sanctuary Everywhere; Boycott, Divestment and Sanctions; and Resisting U.S. Border Militarization. In the name of Love, we are called to witness for justice, equal rights, and peace – both in Palestine and in the United States.  ~~~

Jeanne Marie Mudd is a Master of Divinity student at the Earlham School of Religion. She also runs a consulting business, Watershed Ways, which promotes heart-centered business designs to ensure people and organizations are successful. Jamie is a member of Pima Friends Meeting in Tucson, AZ (IMYM).

To read a longer version of this article, see: westernfriend.org/media/two-borders-two-walls-unabridged