The majority of liberal Friends in the West share similar traits: First, very few of us grew up among Quakers; we arrived as adults, often fleeing dogmas or religious paths that we now reject. Second, many of us feel a sense of “homecoming” in Friendly traditions like our Peace Testimony, silent expectant worship, and the general spirit of tolerance in our meetings.

These commonalities also contribute other aspects to our culture: We are mostly white, middle class, college-educated, activist, comfortable with Zen and pantheism, Obama and Bernie Sanders, psychotherapy and hiking. We tend to be introverted, con­flict-averse, and future-action-oriented. We are not too hospitable to people of color, a bit academic and cerebral, fre­quently stuck in our decision-making over details of principle, not particularly generous in giv­ing to our monthly meetings, horrified by outreach or proselytism, and reluctant to talk about our spiritual and mystical experiences. 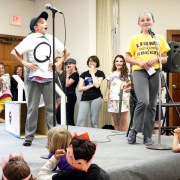 Two distinct branches of Quakers coexist in the American West: Evangelical Friends Churches (“programmed”) and Independent Liberal Friends Meetings (“unprogrammed”). However, we know very little about each other. When we find a rare opportunity to spend time together, we come away dazed and confused. The differences are stark: diversity of belief and sedate, reflective worship in unprogrammed Friends meetings; uniformity of belief and expressive, high-spirited worship in Evangelical Friends churches. Benigno Sánchez-Eppler has compared us to two species of birds that evolved from a common grandparent, then migrated around a large geographical barrier: When they re-encounter each other, they look so differ­ent, their calls are so disparate, the foods they choose are so distinct, and even their mating habits are so incompatible, that they prefer to stay apart.

My personal experience with Evangelical Friends certainly resonates with this analogy. Having fled organ­ized Christianity – with its homophobia and pro-war accommodations, its culturally imperialist mis­sion­iz­ing and its clerical center – I was not prepared to deal with Evangelical Friends, who I learned have pastors and overseas missionaries, who depend on the Bible, and who query behavior not by its political correctness but by its adherence to ortho­dox church teachings. But I was prepared to be tolerant and to seek dialog. So I spent several years attending – and even organizing– cross-branch events, working with Friends of all kinds, trying to build bridges. I attended two World Conferences of Friends – 1991 in Tela, Honduras, and 2012 in Kabarak, Kenya. Participants arrived at these gatherings seemingly well informed about the differences among various branches of Friends, but  . . . Seeing is believing. By departure time, many of us heard general mutters of “never putting up with those Quakers again.” As for myself, after being judged as “not Quakerly enough” one too many times, I stopped attending such gatherings. (Even so, some of my best Friends are Evangelicals!)

It seems clear to me that the majority of Evangelical Friends have given up on us Liberal Friends just as much as we have given up on them. My yearly meeting – North Pacific Yearly Meeting (NPYM) – has made numerous attempts to collaborate with the “other” yearly meeting in our region – Northwest Yearly Meeting (NWYM). Yet no matter what we have done to be inclusive and invite participation, very few NWYM Friends have come to these events. Those who have attended have surreptitiously referred to cer­tain pastors as pronouncing these gatherings as prohibited, mentioned fears in their churches about liberal attitudes, and even harked back to mysterious events in the 1960s that drove the branches in our region apart.

Over the past 120 years, Friends throughout the United States have made numerous attempts to re-connect the different branches of our faith. In every case, the old patterns eventually divided people anew, although Friends usually find ways to continue working together through organizations like AFSC, FWCC, and the Pacific Northwest Quaker Women’s Theology Conference.

So why should we try to re-connect with Friends who have “deviated” from our kind of Quakerism? General principles of common descent and our common reliance on the texts of early Friends like George Fox, Margaret Fell, and Robert Barclay don’t seem like sufficient reasons. Appeals to a common theology seem futile; efforts to build theological unity among Friends have generally exacerbated schisms instead of healing them (the outcomes of the Richmond Declaration of 1887, for example.)

Yet I find myself led to do more work – not less – to seek unity among Friends. After all, “seeking unity” is one of our core Testimonies. It is not just some ideal to aim toward in a utopian future; seeking unity is a practice that demonstrates “living in that Life and Power that takes away the occasion of all war” right now. As a result, I am currently led to conduct workshops on “appreciative elder­ing,” a practice of listening for and calling out the spiritual gifts of other Friends, whatever their denomination.

This leading has allowed me to consult with several groups in my own Yearly Meeting and with Friends in Cuba. Thanks to an invitation from the Cuban Quaker Peace Institute (ICCP), I have made three trips to travel in the ministry among Cuban Friends. Although relatively small in membership, the Cuban Friends Church is is highly regarded in Cuba for being the first “national” denomination – freed from its missionary status – and because it takes leadership in dialogs among other denominations and the government.

Teaching at the ICCP is a delight because the students are ex­cited to be part of their Yearly Meeting’s efforts to get back in touch with original Quakerism and to develop an authentic Latino Quakerism, which is respectful of, but not dependent on, its missionary roots. Cuban Friends are actively re-evaluating Quaker history from their own perspective and their own Experience of the Light. They are consciously involving Friends from all branches in the classes they offer.

One thing I have learned from conducting workshops throughout the Pacific Northwest and in Cuba is this: The “Important Ideas” espoused by Quaker Leaders and Weighty Friends are not generally shared by most people in the congregations. The relationships that people form among themselves, the emotional supports, and the sense of belonging – these are more important than doctrine to most Friends. Regardless of our branches of Quakerism, we generally experience ourselves as counter-cultural, as different from the surrounding majority, and we need each other.

So if we truly seek to uphold the Peace Testimony, we must be willing to turn toward those Friends who have left the Quakerism we love for a Quakerism we don’t like, and make peace with them. If we can travel across the world to talk with Iranians and Soviets, “enemies of the U.S.,” then we can travel across a cultural divide to talk with those Other Quakers. We do not have to like each other. We may not be able to avoid offend­ing or judging each other, but we can still cooperate. We must learn to be such good and noble Quakers that we can bear witness to that love that breaks down all barriers, even among Friends. ~~~

D. Pablo Stanfield is a member of University Meeting in Seattle with a recognized ministry for peace education and conflict resolution among Friends. He believes Friends’ traditions of Good Order, eldering and dialog can go a long way in building communities. A much longer version of this article is posted in Western Friend's online library.