At 11:02 on August 9th, 2015, the bell at the rear of Nagasaki Peace Park began to peal. It was the 70th anniversary of the U.S. atomic bombing of that city. A siren’s wail soon overtook the bell with its shrill, piercing alarm. With my head deeply bowed, I prayed for the sound to carry my sorrow-filled compassion to all the spirits of the dead: the tens of thousands killed instantly by the atomic blast above that very spot; and the tens of thousands more who suffered cruelly lingering deaths, burning from the inside out. I summoned all the intensity of my longing to be present as an Amen. Then the moment was over.

The observance was not all solemn commemoration and mourning, but also urgent political drama. Speeches filled the air with anguished memories and anxious pleas for peace and nuclear disarmament. These were addressed not only to the assembled crowd, but also more specifically to the Prime Minister of Japan, who was present and who was trying to force through unpopular legislation to weaken the Japanese constitution’s rejection of war as a means to settle international disputes. In the background, from lower down in the valley, the high-volume ranting of a right-wing sound truck intruded on the atmosphere. Someone heckled the Prime Minister when he spoke.

For years, I had desired to be present in Nagasaki on that day. The story that I had always heard from my mother on my birthday was that the doctor had come into the delivery room that morning and said, “Your husband will be coming home soon because we’ve dropped another atomic bomb.” I have given up trying to challenge my mother’s perspective that the atom bomb brought an end to the war, as that is the conviction of her generation. But the story is not that simple. 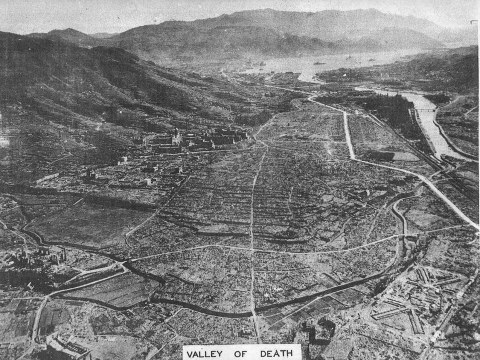 The Nagasaki bomb, for example, exploded directly above the Urakami neighborhood, which is about 3 kilometers north of central Nagasaki. The neighborhood lies in a valley with narrow and uneven terrain, which reduced the blast’s effect, even though its power was greater than the one dropped on Hiroshima. In fact, the blast’s center was so far away from the heart of the city of Nagasaki that the first reports of the bomb understated its damage and were thus ignored in Tokyo. So much for the myth that the bomb ended the war.

My trip to Nagasaki was not so much about sharing the anniversary as about recognizing my new relationship with it. Because my birth came just hours after that bombing, I represent the end of living memory of the event. All the survivors are older than I am. The number of witnesses left alive is rapidly dwindling. Eighty percent of the Japanese population was born after the war. Humanity’s loss will be profound when we can no longer hear a survivor say, “Never let this happen again.” By attending the bomb’s anniversary in Nagasaki, being present, viewing the relics, encountering living historical witnesses, I made myself into a carrier of the survivors’ testimony to the world.

Before this pilgrimage, I used to view the story of the bomb from the standpoint of the Manhattan Project. But I have come to realize that if I begin with the suffering of the victims, rather than with the accomplishment of the scientists, the narrative becomes totally different. It becomes a story in which immense pain and suffering completely overwhelm any victorious pride of achievement. Reading of the intense work of the project scientists demonstrates how the banality of their discrete tasks blindered them to the ultimate impact of the project. From that perspective, it seems as though the tragic results of the Manhattan Project far exceeded anything that the individual participants could be responsible for. Seen from the perspective of the victims, however, none of those scientists, and none of us today, are uninvolved and innocent.

The Nagasaki History museum was a good demonstration of this inverted narrative. The museum’s exhibits began with grim depictions of destruction and death. After six, I lost count of the number of elementary schools destroyed within the immediate range of the bomb. Only after the narrative covered this horrendous tale of suffering did it expand to include the story of the making of the bomb and how it worked. Absent from those descriptions were the notes of proud accomplishment that are embedded in the American version of the story.

History museums, however, are only one cultural medium for remembrance. In Hiroshima, I visited the Museum of Contemporary Art in Hijiyama Park, which overlooks the rebuilt city. Experiences of lingering emotional trauma from the bombings persist and are evident in contemporary Japanese art. This came through to me more viscerally while viewing this art than from any set of archival photographs. To paraphrase the title of one major work in the collection: “When will we awaken from our nightmare?”

I had arrived in Nagasaki the day before the anniversary so that I could learn the shape of city and its story before the commemoration. The Peace Park was bustling with activity in preparation for the next day’s ceremony. Crews had erected a large canopy for shade and were putting the finishing touches on a backdrop below the large peace statue. In front of the canopy, I stood and examined the brick foundations protruding like worn teeth from two grassy plots. This was all that remained of the prison compound that was leveled by the blast, along with 81 prisoners and 53 prison staff. The other half of the prison grounds lay flattened beneath the pavement under the canopy.

Because it is located in the hilly terrain of the Urakami neighborhood, which does not offer space for a large public square, Nagasaki’s Peace Park is officially divided into different zones: for Hope, Prayer, and Study. The main zone of the Peace Park, where the official ceremony is held, is dedicated to hope. Down a bluff from the Peace Park lies the Hypocenter Park, which is officially designated as the Zone of Prayer.

The hypocenter of a nuclear blast is the point on the earth’s surface directly below the center of the blast. The hypocenter of the Nagasaki blast is marked by a stark and imposing black marble monolith, which stands behind a  black empty tomb or alter – the Cenotaph – all at the center of a series of concentric circles marked out on the ground, symbolizing the rings of destruction that radiated outward from the blast. The level of destruction and lethality, and the timing of the onset of radiation sickness correlated to distance from this center. As I stood there, people kept coming to stand before the Cenotaph to offer silent prayers. Some brought bouquets of flowers and some brought bottles of water to place on the altar. Flanking the tomb on either side were racks of colorful paper cranes, in sets of a thousand each.

Off to the side, next to an embankment, stood a pillar from the original Urakami Cathedral, which has been relocated to Hypocenter Park. The blast had collapsed most of the building on top of the priests and parishioners who were attending services that morning about a half kilometer away, across the valley. Until 1958, only the lower part of the building’s facade and some of its south wall survived, standing as a stark reminder of the blast.

Many survivors in Nagasaki and elsewhere wanted the bombed-out ruins of the cathedral to be preserved as an imposing relic of the bomb’s destruction. But the Catholic community in Urakami, which had lost some eighty percent of its members in the bombing, insisted on rebuilding the cathedral exactly where it had been. The community dated back to early missionary activity in the 1600s, had persisted in secrecy through some two hundred years of suppression and persecutions, and had finally been allowed at the turn of the twentieth century to build a cathedral, the largest church in Asia at the time. For the Catholics of Urakami, rebuilding their cathedral would symbolize their church’s recovery  and survival.

Today, precious little physical evidence of the vast devastation of either Nagasaki or Hiroshima remains outside the historical museums. Only after Nagasaki’s old cathedral in Urakami was gone did Hiroshima act to preserve its Prefectural Industrial Promotion Hall, which like the Urakami cathedral, stood in striking ruin after the atomic blast overhead. The structure has been redesignated as Hiroshima’s Atomic Bomb Dome, a permanent memorial, a UNESCO World Heritage site, and the world’s preeminent symbol calling for nuclear peace.

Beneath the shiny surfaces of rebuilt cities, however, lie layers of living memory etched by traumas, thinly covering the mute presence of those who were lost. As I traveled around Nagasaki and Hiroshima, I looked at every elderly person’s face and wondered what story each could tell. And the middle-aged and younger people – what stories and effects from their parents and grandparents had they inherited?

On the last day of my trip, I visited landmarks throughout Nagasaki, which anchor its claim to being a city of international culture. I visited Dejima, the man-made island in the city’s port, which was once a trading outpost for the Portuguese and then the Dutch. I went to the French neo-gothic structure, the Oura Church, which was built in the 1860s. I visited Glover Garden, where influential expatriate entrepreneurs had built their fancy houses. From an overlook near Glover House, I could just barely make out the tall, orange Ferris wheel just south of Urakami Station. From where I stood, it would take more than half an hour by streetcar to return to Hypocenter Park, to the site of the bomb blast. If there is any sense in attributing the word “sacrifice” to the bombing of Nagasaki, it would be to acknowledge the sacrifice that Urakami absorbed, bearing the brunt of the blast and sparing the rest of the city the worst.

I returned to Urakami to say farewell. Sitting by the Fountain of Peace, I meditated on its intended meaning – as an offering of water for the souls of atomic bomb victims who died searching for water, suffering great thirst from the burning heat of the blast. I let the sounds of the water splashing back into the pool flow over me and help me center.

Then I stood humbly before the Cenotaph in Hypocenter Park, about three rings back. An older Japanese gentleman came up and spoke to me, laboring hard to express himself in English. He told me of the longing for peace that is folded into each string of a thousand paper cranes. I replied that I had come to make amends with all who died on the day that I was born, seventy years ago. For peace, I said, touching my heart. He thanked me for coming to pray there. With great emotion, we bowed to each other and said thank you and goodbye.

I longed for my silent standing in that place to be a plea for reconciliation and forgiveness. But my prayer felt overwhelmed by the story of needless death and suffering, stretching from then to now, interwoven with American denial, yet binding us all together. May I keep faith with compassion, and thereby keep faith with the suffering. May I carry the memory and vision of Nagasaki with me for the rest of my life and share them as widely as I can, in hope that humanity shall eliminate all nuclear weapons.  ~~~

David Poundstone lives in Denver, Colorado.  He is a member of Mountain View Friends Meeting (IMYM), where he is currently serving as clerk.