Skip to main content
View other articles in "On Limits" issue of magazine.
May 2016, June 2016

In 2012, Bill McKibben began his “Do the Math” tour in Seattle. This was a talk that McKibben took on the road to spread the idea that humans are trying to extract more fossil fuels than we can safely burn – that is, more than we can burn while staying within a safe temperature on the planet. In other words, our burning of fossil fuels is creating greenhouse gasses in quantities that exceed the limits that we can live with.

“Do the Math” drew a large audience in Seattle. The organizers had to move the talk to a larger venue because so many people wanted to attend. I sat in the opera house with 2,200 people, feeling both excited and frustrated. I was excited to see so many Seattlites concerned about climate change. And I was frustrated beyond belief that nothing was organized as a follow-up after the talk. It appeared that we would all walk out the door with no names collected and nothing organized. 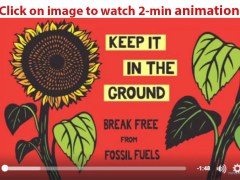 That spring, I invited ten people into my living room, and we discussed and decided to start a 350 chapter in Seattle. (Yes 350 has chapters. This is a little-known fact because they do not advertise it, but true. They have just in the last two years gotten the minimal staff they need to back up chapters.) By May, our new Seattle chapter held our first public meeting, which brought out a hundred people. Attendance dropped off a bit during the summer, then slowly, it climbed back up. Since 2014, we have generally had about forty people at our monthly meetings – and last month we had sixty. These meetings follow a simple format: the first thirty minutes or so are devoted to sharing information with our members. Then we have sixty minutes of workgroup time and finally, twenty minutes of report-backs from the different workgroups.

Our workgroups range from “Keep it in the Ground,” to “stop TPP,” to speaker’s bureau, to divestment, etc. Although each workgroup is focusing fairly narrowly on how to move one specific issue forward, we don’t feel discouraged, because during the report-back time, we hear what the other workgroups are doing, and we know we are in solidarity with each other. This is true grassroots organizing. This is civic action by everyday people who go to their jobs during the weekday and then turn out in the evening to organize to stop climate change. 350 has scores of chapters across the country. Find one near you or start a new chapter! 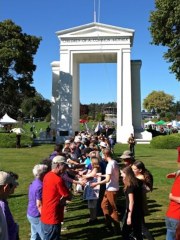 The reason that I spend basically all of my free time with 350Seattle is that, before I joined 350, I felt scared and depressed about climate change much of the time. I feel terrified to think about how it threatens my daughter’s future. And the news is often bleak about climate change. It is possible that we may be too late to make the earth safe for the future of humanity. But my work with 350 allows me to experience some significant successes in our struggle to turn this around. For example, five new coal terminals were recently proposed for Washington and Oregon. After we organized public opposition to that plan, only one coal terminal is now being considered, and that one is hanging on by a thread. In another example, I joined a hundred people organized by the Sierra Club to go testify before the Utility Commission about Puget Sound Energy’s terrible plan to keep one of their coal plants open for an additional twenty years. So many of us showed up to testify that we didn’t fit in the room. PSE backed down and now will be offering a plan to close the plant by January.

350Seattle.org also helped with the ongoing efforts to stop the XL pipeline. We held two demonstrations at the Federal Building – one encircling it completely!  We helped train people in civil disobedience, which we were prepared to do if necessary to stop the pipeline. And we bird-dogged President Obama when he was here in Seattle. Finally, this November, we held a victory party in a local bar after President Obama finally cancelled the XL pipeline!

We have organized rallies and demonstrations with 1,000 to 2,000 people. We have brought public attention and opposition to the Transpacific Partnership “treaty” and the exploding Oil Trains that travel through our cities. We are pushing the city of Seattle to divest its pension plan from fossil fuels and Bill Gates to divest his foundation. One of our members organized a group of children to successfully sue the State of Washington’s Ecology Department, arguing that the department was not adequately regulating carbon in the state and thus, was jeopardizing the children’s future. The judge agreed that this was a case where limits must be set on carbon emissions to protect children’s futures, and she ordered Ecology to come up with a plan.

Our most famous action was done in coalition with the Backbone Campaign and the organizations The 98% and Idle No More. We organized and coined the phrase “kayactivists” when we took kayaks out into Puget Sound to try to stop Shell Oil’s artic rig from leaving the sound to go drill in the Arctic. Between our action in Seattle and the Greenpeace action in Portland, we caused enough delay that Shell would not be able to meet in its drilling goals in the Arctic, and they lost enough money that they decided to cancel their plans for drilling in the Arctic indefinitely. 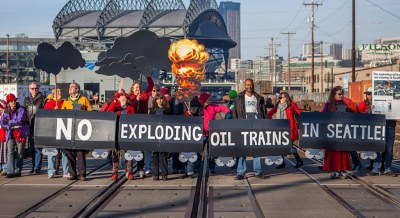 This May, 350.org is holding a series of mass  demonstrations at seven sites across the U.S. – our “Break Free Campaign” – to highlight some of the worst fossil fuel facilities in the nation, facilities that must be shut down. One of these sites is the Anacortes refinery near Seattle, which provides 49% of the oil that is used in the Pacific Northwest. Our 350Seattle.org chapter, in coalition with other groups, is working hard to recruit and prepare hundreds of people to participate in this action.

People often feel hopeless about climate change. I can’t count how many people have told me that there is nothing we can do. But that is simply not true. There are many things we can do. We are limited only by the amount of time and energy we can devote to public organizing to stop the unlimited greed of the fossil fuel industry.  Please know that you can be part of making the critical difference!  ~~~

Lynn Fitz-Hugh is a member of Eastside Friends Meeting in Seattle (NPYM). She is a mother, a therapist, and a life-long social justice activist.   She is also the founder of 350Seattle.org.