Skip to main content
View other articles in "On Rules" issue of magazine.
November 2020, December 2020

Some rules are written down, like those in law books. Others are unwritten rules, which can be even more stringent and unforgiving than statute, like the unwritten rules that whisper to dictate which emotions each gender is supposed to feel and show, or not. Lately, various new and somewhat inconsistent rules have arisen concerning speech that some people experience as offensive, and these rules have been causing occasional havoc.

Various kinds of conflicts contribute to these controversies, including: political partisanship; severe and growing economic divergence and insecurity; the separation of urban, suburban, and rural cultures; and multipolar sex and gender archetypes. Many people feel victimized, often justifiably. However, victimized people frequently react by piling on the offender and by scapegoating them. This is really not a great solution for language perceived as offensive, especially when the offenders are basically sympathetic to the oppressed. Such reactivity will never resolve our society’s most divisive debates.

For several decades, feminists have been pointing out that “the personal is political.” This observation is compounded today by social media, where the private is often public. Although it is generally a good practice to drag problematic ideas and remarks into the light, where they can be examined and analyzed, too often steady discernment is sidetracked by emotional hyperventilation, especially on social media.

Of course, we all have a right to feel and express our emotions when we feel hurt. Yet when you’re feeling strong emotions like fear or anger, rather than airing them immediately and reactively, it’s a good idea to find a reliable sounding board to get them out of your system, even if it’s just your pillow. What doesn’t kill you may make you stronger.

When I was about eight, I was the scapegoat in my school. I was a “cootie” – a word that hurt and bothered me for many years. Apparently, I was unclear on some unwritten rules for social interaction with my peers. My mom, who had also been similarly harassed by other kids, advised me that life wasn’t fair, but I would be OK. And it was pretty clear to me that she was doing fine.

But at such a young age, the feeling of being a victim among my peers and being without recourse went very deep. I learned to assume that any group of peers would want to exclude me. Still, every cloud has a silver lining. Being shunned helped me develop a feeling of empathy and protectiveness for the underdog. It also made me a “wallflower,” an outsider, who can look upon a situation from a wholistic and detached point of view.

Gandhi said that the Sikh warriors were perhaps his most effective nonviolent comrades because they were accustomed to confronting physical violence.  In my case, accustomed to separation, I created my own psychic equilibrium for nonconformity.

Now that I’m an adult, I understand that most people have felt bullied or put down at times while growing up. Humanity is a social species, with an eternal dynamic tension between individuals and their groups, as well as among groups. These tensions are often painful.

Over time, I gradually developed socially, but my core feeling of being a scapegoat never really disappeared until I had the very good fortune of meeting the late Bill Moyer of San Francisco Meeting. Moyer was famous as a nonviolent activist, and I attended his workshop on “Creating Peaceful Relationships in a Dominator Culture.” 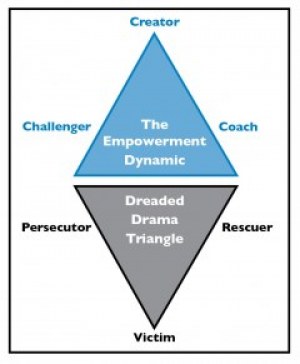 A key topic in that workshop was Stephen Karpman’s “Dreaded Drama Triangle” of “Victim, Persecutor, and Rescuer.” This framework clarifies how a victim feels justified in persecuting her persecutor, which obviously perpetuates the problem. That paradigm helped me become conscious of my own knee-jerk reactivity. (More recently, David Emerald expanded this into a double triangle, “The Empowerment Model,” adding “Creator, Challenger, and Coach.”)

Moyer also taught us in that workshop how to hold onto ourselves when we feel afraid and how to observe and notice that, in almost any moment, one’s real situation is not truly dangerous or life-threatening. This may be the most basic rule for nonviolence, to maintain the emotional equilibrium which enables one to look at the world through the eyes of one’s opponent or persecutor, and to understand their perspective. This is the psychic aikido that can disarm opposition and mend enmity – by enabling one to name and speak to the feelings and needs of the other.

Now of course, it takes time and commitment to change your psychological and emotional outlook from one of victimization to one of empowerment. And it’s totally worth it.

We live in a dominator culture and many people belong to oppressed groups that are subjected to economic and physical insecurity far more obvious and hazardous than I have ever faced. It is not surprising when oppressed people want to persecute their oppressors, to lash out violently. But I have found that mirroring a persecutor’s game is not the path to true empowerment. While understandable, it’s a dead end.

Recently, the New York Times resurrected a 2016 editorial by Ruth Bader Ginsburg. She wrote, “Another often-asked question when I speak in public: ‘Do you have some good advice you might share with us?’  Yes, I do. It comes from my savvy mother-in-law, advice she gave me on my wedding day. ‘In every good marriage,’ she counseled, ‘it helps sometimes to be a little deaf.’ I have followed that advice assiduously, and not only at home through 56 years of a marital partnership nonpareil. I have employed it as well in every workplace, including the Supreme Court. When a thoughtless or unkind word is spoken, best tune out. Reacting in anger or annoyance will not advance one’s ability to persuade.”

Just as Dr. Martin Luther King, Jr., kept his eyes on the prize (Philippians 3:14), Ginsburg decided she would rather be effective than be “right.” Looking for the speck in our neighbor’s eye is a waste of time (Matthew 7:3-5). In Man’s Search for Meaning, Nazi concentration camp survivor Victor Frankl described the sustaining and empowering value of life goals, of choosing those purposes larger than oneself that reliably make life meaningful.

The path of self-empowerment is not an obvious path. It violates the rules of our dominator culture. Power-with, yin power, operates by the rules of nonviolence, seeing that of God in everyone, loving our enemies (Matthew 5:44). And rumor has it that nonviolent methods are the most certain and most lasting.

We are all living on borrowed time. So let’s not waste it.