“I started studying rivers pretty late in life,” says the ebullient voice of my mid-20s-research-technician-self. “Actually, I got a master’s degree in Forestry first.”

“Twenty-five isn’t so late,” grumbles the wearier voice of my mid-50s-professor-self.

Ten address changes, two divorces, and almost thirty years as a river ecologist separate my dueling – or perhaps “dualing” – perspectives. I consider the timespan and the passages that separate these two selves. The changes feel gradual.

Yet my cousin – the one who’s a life coach – says that my incrementalist’s view is an illusion. “All changes occurs in an instant,” she offers. “You might spend years preparing for a change, but it always happens suddenly – in a specific moment.” This idea continues to defy my recalcitrant logic. Once again, I comfort myself by attempting to think of an exception to her rule. Once again, I concede her point – this time, as I begin to ponder Euler, Lagrange, and river magic. 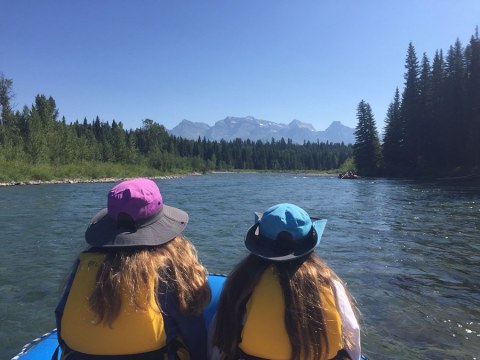 It’s the mid-1700s. Leonhard Euler is a Swiss mathematician. Joseph-Louis Lagrange is Euler’s contemporary in France. Euler and Lagrange forge a storied collaboration in mathematics, developing equations and solutions that are widely used to this day. They also employ two different perspectives to describe, mathematically, the behavior of liquids and gasses in motion.

In the context of rivers, Euler takes a familiar view. He sits on the bank; the water flows by. We scientists call this view the Eulerian Reference Frame, partly to acknowledge Euler’s mathematical genius and his contributions to science, but mostly to sound important in front of one another.

Lagrange adopts a less familiar view, that of a finite parcel of water moving within the current. He becomes water. Application of Lagrange’s perspective wins him recognition for creativity and mathematical aptitude. Still, he is never credited for what must be a related and perhaps more important discovery – that of river magic. “On the Spiritual Consequence of River Magic” is rumored his greatest treatise, but the text never surfaces. Perhaps in the face of the staunch rationalist filter of scientific peer review, only his equations are deemed fit for press. Or perhaps more likely, he keeps his rumored discovery to himself, leaving behind only his frame of reference as a clue to deeper awareness – the gift of a lens to facilitate my own independent and personal discovery of river magic.

My mid-20s-research-technician self is standing on the bank of the Middle Fork Flathead. Jack is in the raft, beached for the moment. He motions to me and calls out, “Push off, and jump on in!” With his directive, Jack liberates me from the bank while sentencing my colleagues to the long bushwhack back across the floodplain, toward the cars. One colleague mutters something indiscernible and turns away. The rest shift their feet awkwardly, pretending nothing extraordinary is about to happen. Walking toward the raft, my mind flashes to my childhood, canoeing on domesticated rivers back east. Unlike those, the river in front of me is untamed. Dusk lingers. Mayflies swirl. I push off, and jump in the raft. Jack applies light pressure on the oars. I feel the pull of the current, the world adjusts, and my colleagues on the bank recede upstream.

A decade wanes. I’m at the Grey Owl boat ramp on the Yellowstone. It’s the first launch of my new-to-me drift boat. With my hands on the gunwales and one foot in the boat, I kick the bank with the other foot. The world realigns and the bank moves away. As if in a stooped, Lagrangian variant of “warrior three” pose, I gather my balance momentarily, one leg still extended behind me, and glide into the current. I center myself in the boat and secure my place in the flow, another leaf dotting and drifting upon the river’s surface.

More time flows and my age confronts me, measured in degrees latitude, as I stand at the 49th parallel. In front of me, the waters of the North Fork Flathead emigrate from Canada, noisily baptizing themselves as residents of the U.S. I wade in, semi-circumnavigating my raft. Both of my daughters are already aboard, nestled in their life jackets. With a firm tug, I liberate my girls from the bank. I stumble as I guide the raft out into the current, working to keep my footing on the slick, water-worn cobbles while holding the raft against the flow. I look in anticipation toward my friends’ raft. They launch. I perceive their transformation; they join the current while I struggle against it. I find my footing, clamber up over the side of the raft, and lurch into the oarsman’s seat. My girls are a chorus of laughter, ostensibly at my comedic clumsiness, as the current catches us. My breath catches, too. The world is unmade. I lock the oars, and irrevocably, the launch site drifts away.

As my mid-50s-professor-self drifts back into view, I am more keenly aware of the contrast between my Eulerian habits and my Lagrangian spirit. On the riverbank, separate from mindfulness, I fancy myself the immutable reference point past which all waters flow. The sense of solidity on the shore is familiar and comfortable. I feel in control. I am lulled into the illusion that I can continue to sit still if I so choose, perhaps while carefully charting my next bearing. Yet such orienteering is an illusion; the entire mode of existence is self-referential. On the bank, ensconced in a familiar false security, I remain asleep and elude river magic.

“Every change happens in single moment,” my wiser, seemingly-timeless-self reminds me. Now I push and jump in while Jack pulls against the oars. Now I kick the bank away from my new drift boat and gather my balance. Now I clamber into the raft and, greeted by a laughter chorus, I lock the oars.

Adopting Lagrange’s vantage, I am immersed in river magic, enveloped in Spirit. The land – everything familiar and grounded – becomes fluid and begins to slide away, endlessly. The world made anew floods over me; I drink it in. I become part of the flow, one of a million trillion parcels of water, each a swirling, dancing reference point defined only in terms of its momentary relation to the others. Engaged with the current, I pay homage to its power – immensely greater than my own – and experience the relief of humility. I relinquish the illusion of control, mindful of the impossibility of going back, or even holding still. Moving forward I improvise, responding playfully to unexpected turbulence and obstacles while seldom exerting more than gentle pressure against the oars.

I enter the river and chance upon faith. In faith, I find a deep, carefree, adventurous comfort that cannot exist in the seductively familiar world of the riverbank. Nothing persists unchanged through a passage into the Lagrangian realm. I, too, am broken open in transit. My laughter joins the chorus, and I awake. ~~~

Geoff Poole is a professor and ponderer of rivers in Bozeman, Montana. He attends Bozeman Worship Group and Montana Gathering of Friends quarterly meeting (NPYM) with his two daughters, who are his river companions and to whom this essay is dedicated.