The award-wining 2012 documentary film, Chasing Ice, paints a beautiful and profoundly disturbing picture of the rapid retreat of glaciers from our planet. This film was made by Jim Balog, who founded the Extreme Ice Survey in 2001 to document the dramatic impact of climate change on the polar regions of our planet.

The film makes three points that resonate with me deeply. First, Belog says that it took him quite a long time to accept that humans could actually change the climate of the planet. Second, Belog said that he wants to be able to tell his two young daughters that he has tried his best. Finally, the factual reality of the current rate of global warming is shocking; it is even faster than projections made as recently as 2007 by the Intergovernmental Panel on Climate Change. The chart below makes this point most stunningly for me. 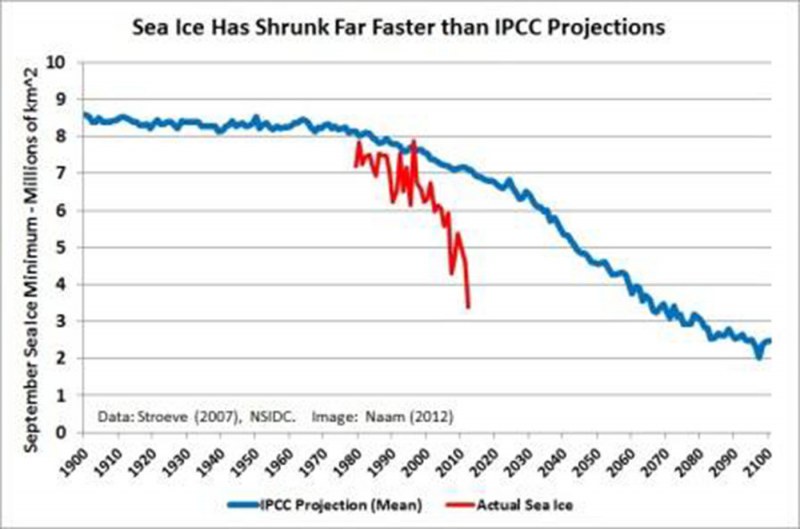 Tibetan Buddhists are painfully aware of these dramatic changes. The Tibetan plateau supports the third-largest ice mass on Earth. This ice is melting at a rate of about 7% a year. The Dalai Lama is outspoken about the need for urgent action. He combines the spiritual and the scientific by calling our attention to the fact that “We are part of nature.”

Normal spring run-off from ice in Tibet feeds the Ganges, Indus, Mekong, Yangtze, and Yellow Rivers. The loss of Tibetan glaciers will cause water shortages for much of the world’s population.

Like Buddhists, prominent Quakers are also speaking out about climate change. Madeline Schaeffer, Friends Relations Associate with American Friends Service Committee, wrote on January 2, 2013, for the AFSC blog, “Our current environmental shifts are not simply a result of carbon emissions; they are evidence of a deep human disconnection from the earth and one another.” The organization “Quakers in Britain” has published a pamphlet that examines climate change as a social justice issue, which states, “Climate change has profound social, political, and economic consequences. The highest price will be paid by the poor.” Friends Committee on National Legislation has as one of its legislative priorities to seek congressional support for “solutions to counter and mitigate global climate disruption and assist threatened human populations at home and abroad.”

For several months, I have been slogging through the book, Plan B-3, written in 2007 by Lester Brown of Earth Policy Institute. I found it difficult to endure the book’s early chapters, which detail “everything” that humans are doing to contribute to global warming and “everything” that we must do to fix this mess. I was tempted to skip these early chapters and jump ahead to the sections that describe all the amazing, positive initiatives that are already happening globally to counter climate change.

But, in retrospect, I agree with Brown’s decision to lay out all the details of the problem first. I think that we must wake up to the urgency of our situation and confront our obligation to respond to this emergency, before we can proceed to hope and action.

Our situation is indeed urgent. Many scientists agree that we are quickly approaching the “safe upper limit for CO2 in our atmosphere.” (See: 350.org/about/science.) Most of this change is due to humans burning fossil fuels.

May we let this love guide our actions. ~~~

Barbara Donachy a member of Mountain View Friends Meeting in Denver, Colorado (IMYM). She serves on her meeting’s Peace and Justice Committee, on the Area Program Committee of AFSC’s Colorado office, and on AFSC’s West Region Executive Committee.