Skip to main content
View other articles in "On Competition" issue of magazine.
January 2017, February 2017

Saturday morning, I reach the border at Nogales, Arizona. From near and far, the fence rises. From a distance, it appears as a blade that slices apart both the wholeness of the natural world and the wholeness of a human community. Up close, the twenty-foot barrier imprisons and excludes, looming like a nightmare. The huge, vertical, rust-colored metal slats nearly overlap. I peer through them, looking down a cliff at a street below, and at the sidewalk across that street, in front of a little store. On that spot, sixteen-year-old Josè Antonio Elena Rodrìguez was killed, shot repeatedly by a jumpy American border guard. 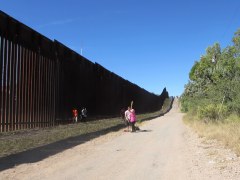 All these images filled me with an intense stir of emotions– shock, grief, anger, love, hope, solidarity – as I participated in the three-day Convergence at the Border organized by School of the Americas Watch this October.

I joined about one thousand others at the Nogales/Nogales border. Many of the Latin American participants had been harmed personally by the School of the Americas (SOA) and other operations of my government. The U.S. Army began training Latin American military forces in the 1940s at SOA in Fort Benning, Georgia. SOA manuals, released in 1996, spelled out how to control people by any means – including torture, extortion, and execution. Graduates of the SOA returned home to brutalize compatriots. Individuals and groups who spoke out for human rights were especially targeted. After the 1989 massacre of six priests and two women in El Salvador, Father Roy Bourgeois and his companions founded
SOA Watch. They began holding an annual protest at the gates of Fort Benning. Since then, they have organized over thirty years of prayerful, nonviolent response to the violence of SOA.

SOA centers have expanded to at least forty-five sites in the U.S. and ten in Mexico. American and Mexican border-patrol officers are now being trained by SOA. Like other aspects of the military-industrial complex, SOA is integrated into the U.S. economy and into the security narrative of our nation. SOA has been officially re-named the “Western Hemisphere Institute for Security Cooperation (WHINSEC),” but activists continue to call it “SOA – School of Assassins.”

Tragically, SOA is the tip of one iceberg in a field of icebergs. The U.S. habit of Central American oversight and intervention has resulted in untold violence and economic devastation south of the U.S. border. SOAWatch organized the Convergence at the Border this year to expand their focus and draw attention to growing systems of border militarization and to root causes of migration. 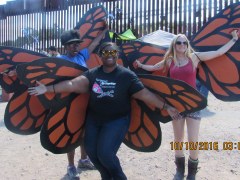 My path to the border has been slow. From afar, I knew the U.S. immigration system was broken. I knew that American interventions and foreign policies often push floods of people out of their homelands because those people want to survive or do better than merely survive. Recently moving to Arizona from Utah, I have learned more about the human costs of U.S. international policies – and about our country’s moral culpabilities – than I would ever have learned while living in distant Utah. In Utah, people read and hear daily about environmental issues and control of federal lands. In Tucson, we read and hear daily about border issues – the good, the bad, and the ugly. We are immersed in life with people who are fodder for the military-prison-immigration-industrial complex. The façade of official lies that magnify fear, inequality, and racism throughout the general public is a façade that crumbles in the light of real life at the border. The longer I am Quaker, the less tolerant I am of facades.

Four years ago, Pima Friends Meeting in Tucson, Arizona, began a concerted effort to shine light on the realities of immigration. Following an educational workshop, some meeting members visited the border and also met with members of Casa Mariposa, an intentional community with strong Quaker ties. Casa Mariposa provides temporary hospitality to immigrants recently released by Immigration and Customs Enforcement (ICE). The Peace and Social Concerns Committee of Pima Meeting has held many discussions about immigration concerns, and under its care, the meeting united around a minute that speaks against human rights violations and in support of just, humane immigration policies. Pima Meeting now has a separate Migrant Action Committee.

Many experiences prepared me for the SOAW Border Convergence. However, these experiences have been acquired from safe and privileged sidelines, and are vastly outweighed by the lived experiences of Central American migrants. My spirit was born for peace and justice. So deep has been my belief in “Love thy neighbor,” agape, and the ideals of American justice that I am repeatedly stunned by the inhumane treatment I have come to see as a reality in my country. When I told a Quaker elder of my continual shock and sorrow, he said “Good.” I am a recovering innocent. 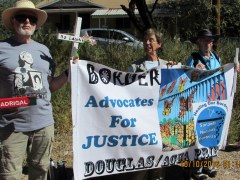 I now see clearly that human rights are violated at all levels of the U.S. immigration system – including apprehension, detention, and judiciary. Three years ago, I met a young woman and her six-year-old daughter at Casa Mariposa. The woman was frantic. She had been traveling with a sister who had disappeared when U.S. Border Patrol agents scattered the members of their group. Her sister was still missing two days later when the woman and her child got on a bus to join family members on the East Coast. According to the organizations No More Deaths and La Coaliciòn de Derechos Humanos, intentional chases by Border Patrol agents cause hundreds of injuries, deaths, and disappearances every year.

Recently, I joined a tour of the Tucson border-control station and detention center. Our two tour guides justified harsh and even abusive apprehension tactics as necessary for catching terrorists. Then they admitted, “We have no knowledge of terrorists being caught at the border,” and “most migrants are harmless.” Also, even though More Deaths has published detailed reports of frequent abuse in apprehension and detention, our guides claimed, “We have never seen migrant abuse. None of our colleagues have told us they have seen it. Every complaint is investigated and resolved by independent law agencies.” Hearing those statements, I thought of Josè Antonio Elena Rodrìguez, the sixteen-year-old killed by the over-excited agent at the Nogales/Nogales border. If his case, four years later, has seen no satisfactory investigation and resolution, then I doubt that any migrant can really expect justice for a black eye or a broken rib or the withholding of medical care.

U.S. courts and human rights groups, including the U.N. Human Rights Council, have formally criticized U.S. detention and judicial systems for migrants. In fact, just this past November a U.S. federal judge decried the inhumane conditions at the Tucson border-control station. He ordered the immediate provision of working toilets, sinks, showers, mattresses (instead of bare concrete), and more blankets.

Asylum seekers in the Tucson sector, seeking protection from danger, are rarely allowed to enter a full judicial process before asylum is denied them. The few who are allowed to continue a formal asylum process must pay for lawyers and manage their cases from jail, unless they can come up with bond money. Arizona judges have increased bonds tenfold in recent years – from around $2,000 to as much as $20,000 – not because the detainees are considered less trustworthy or more dangerous (Homeland Security vets them all), but as a deterrent to seeking asylum.

Twice I have observed the “Operation Streamline” court in Tucson. In it, sixty to eighty undocumented border-crossers are brought before a judge, six to ten at a time, to be sentenced to jail and deportation. It is an assembly line. The defendants shuffle under heavy chains to line up before the judge. The judge repeats the same set of questions six to ten times, and lawyers prompt the defendants to respond. In this way, sixty to eighty people can be tried and sentenced in under three hours, sometimes as quickly as one hour.

When SOAWatch held their Convergence in Nogales, I was led to participate. Pima Meeting offered hospitality and help. We shared information with IMYM Friends and hosted an educational workshop. Pima members supported SOAWatch in many ways – we helped make puppets, helped organize specific events, and participated in Convergence activities.

The three-day Convergence began with a Friday evening candlelight vigil outside the Eloy Detention Center. While those of us outside were praying and singing, our faces lit by candles, detainees inside the facility joined us by flashing their lights. 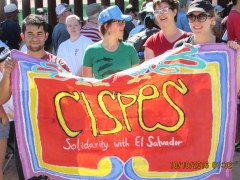 On Saturday morning, Veterans for Peace led our procession – with their banner in front and doves flying above – from Hotel Americana to the border. It was especially poignant to realize that many foreign-born veterans of the American military have been deported by the U.S. Some of those veterans were waiting in Nogales, Sonora, to meet up with the veterans marching from the U.S.

North of the fence was a large display of posters depicting people killed directly by the border patrol. These posters did not include migrants found dead in the desert, about a third of whom remain unidentified. Between 6,000 and 8,600 migrants have died in the borderlands since the late 1990s.

On both sides of the fence in Nogales were stages, nearly touching, from which musicians and speakers alternate from either side of the border. We heard from a man who had been tortured by SOA graduates, from the wife of a man who was beat up by border patrol agents, and from family members of José Antonio. We heard songs about death and injustice, and beautiful music intended to bring hope. Sights and sounds offered a mixture of heart-break and comfort. Mass was later said for José Antonio, and an interfaith service was held.

When we returned to hotel for workshops, I sat in the courtyard at the Quaker table surrounded by people who care. They care that SOA teaches evil, care that our immigration system mistreats and kills real people, and care that real families suffer and grieve. They included human rights workers, lawyers, religious and humanitarian workers, and other recovering innocents like me.  ~~~~

Kathy French is a a member of Pima Meeting (IMYM). She is convinced Quaker who lived in Utah for twenty years. She is a retired academic and the mother of sons.