You have heard that it was said, “Love your neighbor and hate your enemy.” But I tell you, love your enemies and pray for those who persecute you, that you may be children of your Father in heaven. He causes his sun to rise on the evil and the good, and sends rain on the righteous and the unrighteous. If you love those who love you, what reward will you get? Are not even the tax collectors doing that?

Since 1998, I have been Coordinator of the African Great Lakes Initiative (AGLI) of Friends Peace Teams, which has been involved extensively with trauma healing, reconciliation, forgiveness, and rebuilding communities destroyed by deadly violence. This experience includes the aftermath of the genocide in Rwanda, the twelve-year civil war in Burundi, the on-going fighting since 1996 in North and South Kivu (Congo), the attacks by the Lord Resistance Army in Uganda and the Central Africa Republic, the 2008 post-election violence in Kenya, and the Boko Haram conflict in northern Nigeria. I have learned a lot over these eighteen years.

Western culture believes that revenge is an innate human impulse. When Ulysses returned from the Trojan War and murdered all his wife’s suitors, it was generally expected and accepted as the appropriate reaction of a super warrior. Hamlet contemplates revenge for his father’s death and fights with Laertes, who is bent on revenging his father’s murder by Hamlet. Most action movies are based on the theory of redemptive violence, in which the “hero” (or someone he knows) is slighted, and he must respond with overwhelming violence to revenge the slight. These common beliefs – in revenge, in redemptive violence, and in the inherent violence of normal men – have had devastating consequences. It took President George Bush no more than a day after 9/11 to rally the American public to retaliation, which quickly became a “war on terror” that engulfed much of the world, causing much death and destruction. 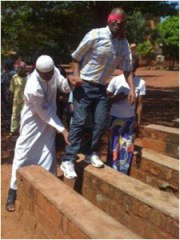 Numerous passages in the Bible – mainly in the New Testament, but even in some parts of the Old Testament – emphasize reconciliation, non-violence, forgiveness, and love of enemies. These are bedrock beliefs of ardent pacifist Christians, but Western culture as a whole gives no more than lip service to them. It considers pacifists to be utopian and unrealistic in this cruel world of evil people and terrorists. Reconciliation is reserved for “saints” and the Amish; it is definitely not considered to be a fundamental part of human nature; instead, revenge is the impulse that is considered normal and innate.

After AGLI workshops, we frequently record the testimonies of some of the participants. One especially striking testimony was shared by a Rwanda genocide survivor. By chance, she had attended a workshop which was also attended by the man she had watched kill her brother and two sisters. She and the man were paired together for an exercise called, “Trust Walk.” You probably played this game when you were a child: one person is blindfolded, and the second one leads the blindfolded player outside and keeps them from running into trees or falling over stones. In her testimony afterwards, the woman reflected, “I was shaking because my partner was a known killer and very strong. I thought he might throw me down, but he also had fear, and he took me gently, kindly. I asked him, ‘Will you lead me in peace?’ After the trust walk with him, I felt it was not good to stay in my grief and had no fear against him.” When I ask Americans to read this testimony during my presentations in the U.S., most of them say that they could never respond as this woman did, and a few don’t even think this is a true story, but that we made it up! Many people are firm believers in revenge.

The American belief in revenge is a cultural construct and not an innate human quality. Admittedly, most people experience thoughts and fantasies of revenge when someone hurts them, but they also have thoughts of forgiveness and reconciliation. This second set of responses is negated and suppressed in Western Culture. 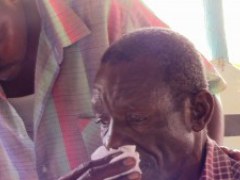 A perpetrator of the Rwandan genocide admitted, “In my area there were twenty-eight people whom I helped to kill. I did not kill anyone myself, but brought people to a place where others killed them, and among those were the pastor’s mother and two of his children.” At first the pastor was bitter and would not speak to this man, but after he attended one of AGLI’s Healing and Rebuilding Our Communities (HROC) three-day workshops, he changed. “Now [the pastor] is our friend,” said the guilty Rwandan. “[He] has helped many people who did wrong during the genocide to accept what they did. He told me that in order to be free I must accept what I did and seek forgiveness.”

It is easy to empathize with the survivors of deadly violence. It is natural to want to help them recover and heal from their wounds, both physical and mental. However, towards the perpetrators of violence, empathy comes less readily. If they are caught, society’s typical response is to punish and imprison them – with no acknowledgement that they, too, have been traumatized by the acts they have committed.

This impulse towards revenge is wreaking havoc on American society. Revenge is an underlying motive behind the extreme rate of incarceration in the U.S. – the highest in the world at 0.7% of U.S. population in October 2013. Since 1941, the revenge motive has sent approximately 26 million U.S. soldiers off to foreign wars, from which they have returned home (if they returned home) mentally wounded by what they have seen and done while at war. These soldiers’ needs for trauma healing are neglected, and as a result, some of them express their traumas at home by becoming perpetrators of domestic violence, murder, and/or suicide. 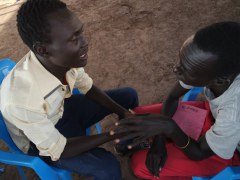 AGLI’s HROC facilitators in Kenya were scared when they met on Mt. Elgon with thirteen leaders of a rebel group called the Sabaot Land Defense Force. From 2006 to 2008, this rebel group was responsible for the deaths of nearly 600 people and the displacement of another 100,000 from their mountain homes. The facilitators’ fears were quickly allayed when they realized that the former rebels wished to become reintegrated into the community that they had harmed, and wished to return to normal, productive life. The difficulty, of course, was to get the community to agree to accept them back after the horrible things they had done. Another Kenyan election is coming up in 2017, and already one of the local politicians wants to recruit some of these ex-rebels into his militia to intimidate and even kill supporters of his opponents. Reconciliation, therefore, is a must in this situation; and it will be a long-term project, involving many small steps. For example: one of the rebel leaders had held a young woman as a “sex slave” while hiding in the forest at the top of the mountain, and he got the girl pregnant. The Kenyan HROC team worked with him and with the young woman until the ex-rebel agreed to take responsibility for the child he had fathered – perhaps just a small step, but a crucial one for the woman and her child.

The first principle of every HROC workshop is, “There is that of Good in every person.” As a non-religious workshop, we have had to add that extra “o” into the familiar Quaker testimony, “There is that of God in every person.” It is remarkable how effective this principle is. Graduates of our workshops, time and time again, mention how this statement has changed their perspective on their “enemy.” Having achieved that new perspective, it is only another short step to reconciliation and the desire to move forward in peace. When reconciliation and/or forgiveness occur, our participants frequently make statements like, “A burden has been taken off my back;” “Now I am human again;” or “I feel lighter.” 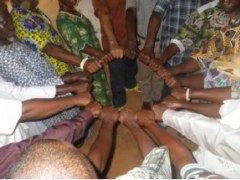 When we first began the workshops in 2003, participants reported afterwards that they had stopped beating their spouses and children, and had started listening to them. Originally, I thought the goals of these workshops were to bring enemies together and to restore normal life to communities, but then I realized that traumatized people take their hurt, anger, and frustrations out on the people nearest to them – their spouses, children, and family members. Since the trauma of the victims and the perpetrators can be passed down from parents to children for generations, healing is extremely important.

If we think only of revenge and retaliation, then we are mired forever in anger, hostility, and viewing the world as an evil place. When we embrace reconciliation, we move on from the hurts of the past toward a better world, one that offers optimism and healing.  ~~~

David Zarembka has been the coordinator of the African Great Lakes Initiative of Friends Peace Teams since 1998. He is the editor of PeaceWays, which can be found online at: aglifpt.org.