Schools don’t have graveyards. At least, that is what many believed until some gruesome recent discoveries.

Last year, Native tribes and government officials uncovered the bodies of more than 1,000 children on the grounds of former Indian boarding schools in Canada. As more bodies are uncovered in both marked and unmarked graves in Canada, this horrific period in North American history is coming into view for the first time for many in the United States.

As disturbing as each newly revealed detail may be, it is essential to remember that this is not news for Indigenous people. Survivors, their families, and their descendants have known these truths for generations. Many have tried to share their stories before, but their voices went unheard and were dismissed as unbelievable or unimportant.

It may be unfathomable that Christian churches would collude with the government to enact forced, inhumane assimilation tactics. Still, the reality of Indian boarding schools has further marred an already painful history for Indigenous people that began with the first U.S. settlers.

Today, many people, politicians, businesses, and academic institutions understand that diversity is an asset. In previous centuries, however, Indigenous people with different skin tones, languages, and traditions than the American ideal, occupying land in this country, were considered a threat. Assimilation was the goal, or sometimes worse. As the paternalistic architect of these institutions, Richard Henry Pratt, famously said, “Kill the Indian, and save the man.”

As faith groups start to unpack the significant role their denominations played in the cultural genocide and assimilation of generations of an entire race, it is essential to remember that these were not schools. Schools do not abduct their students, have tiny handcuffs, and regularly administer physical abuse; nor do schools have graves full of their students’ bodies in the backyard. These were cruel assimilation institutions; at worst, concentration camps.

Considering the hundreds of years of Quaker activism that supported abolitionists, civil rights, and anti-war movements, it has been easy for Quakers to deny complicity in this horrible history. However, Decolonizing Quakers, a working group in North America, has found that …many stories were left untold.

Friends were some of the most ardent advocates for Native cultural erasure. In 1869, Friend Edward Shaw from Richmond, IN, justified Quaker-run boarding schools as tools “to protect, to Civilize, and to Christianize our Red Brethren.”

Despite the horrors, some voices defend the boarding school era as the best option for Native children and often a means of survival for their families at the time, arguing that the alternative was worse. They imply that Richard Henry Pratt cared for these children and viewed Native people as worthy of help and American citizenship. In contrast, most of his peers viewed Native people as subhuman and worthy of extinction. Defenders assume missionaries and teachers had the best of intentions. The problem with “best choices” is that there are still real consequences.

The goal of Indian boarding schools was to strip Native children of their tribal way of life, convert them to Christianity, and assimilate them into the mainstream American way of life. Whether intended or not, that process consistently involved abuse and cruel punishment. Those who lived through it or whose families continue to feel the impact, at minimum, deserve our acceptance of this damning truth. 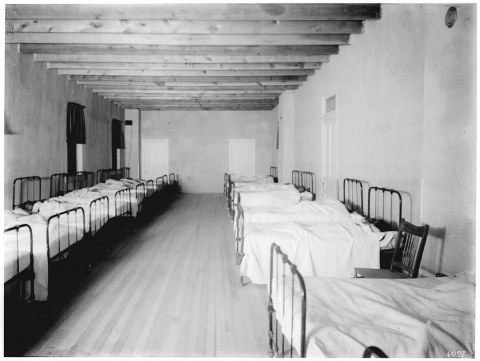 While nothing can erase the pain that centuries of family separation, abuse, neglect, and genocide have caused, Canada has begun to reconcile with Indigenous people formally. As part of the largest class-action settlement in the country’s history – the Indian Schools Settlement Agreement – the Truth and Reconciliation Commission of Canada (TRC) was launched in 2007. From 2007 to 2015, Canada’s government provided $72 million to the TRC to support listening tours and historical education initiatives and to observe the experiences of individuals and families who attended or were impacted by Indian boarding schools.

The Canadian government also provided millions of records on Indian boarding schools to the TRC, now housed in a permanent center dedicated to preserving and honoring this painful legacy. The TRC provided its concluding report to the Canadian government in 2015, which continues to inform the country’s reconciliation efforts. The government has since committed “to achieving reconciliation with Indigenous peoples through a renewed, nation-to-nation, government-to-government, and Inuit-Crown relationship based on recognizing rights, respect, co-operation, and partnership as the foundation for transformative change.”

Following this powerful precedent came the United States’ turn to act. The spotlight turned on the U.S. government and encouraged tribes to seek the same answers – this time, with the world watching. We knew there were many Indian boarding schools across the country. That we would make the same grim discoveries was inevitable.

We cannot forget that these were toddlers, young children, and teenagers. In Indigenous societies, children have always been seen as gifts from the Creator. The loss of entire generations to starvation, abuse, neglect, and torture is still felt in every tribal community today. How did those children learn to survive? To love? To parent? The consequences of intergenerational trauma are inescapable and undeniable.

The U.S. government is making some efforts. The U.S. Army has attempted to establish ties to the children at the Carlisle property in Pennsylvania and works with tribes to return bodies to their communities. These efforts are meaningful and appreciated, but they are just the tip of the iceberg.

On June 22, 2021, Interior Secretary Deb Haaland announced the creation of the Federal Indian Boarding School Initiative. Its primary goal is to investigate the loss of human life and the lasting consequences of these schools.

In a Washington Post op-ed last summer, Secretary Haaland wrote, “The lasting and profound impacts of the federal government’s boarding school system have never been appropriately addressed. This attempt to wipe out Native identity, language and culture manifests in the disparities our communities face, including long-standing intergenerational trauma, cycles of violence and abuse, disappearance, premature deaths, and additional undocumented physiological and psychological impacts.”

Spurred by the activism of native people, people of faith, and ordinary citizens, lawmakers have made several attempts to address these disparities through legislation. There have been some victories, but other recent bills have stalled for extended lengths of time, been subject to so many changes that they fail to achieve the initial goal, or fail to pass altogether.

One example is the Indian Child Welfare Act, which remains under attack. The Friends Committee on National Legislation (FCNL) continues to advocate for lawmakers to uphold this legislation. It requires states to strive to keep Native children with extended family or others within their tribal community if their parents are deemed unfit. The current foster care system essentially extends boarding school policy by removing children from their families and communities.

More must be done – beginning with a nationwide reckoning with the truth of wrongdoings against Indigenous people, particularly among people of faith. Shock and horror – though perhaps initially validating – are not enough. We must channel such dismay into healing and action to correct centuries of harm and injustice. 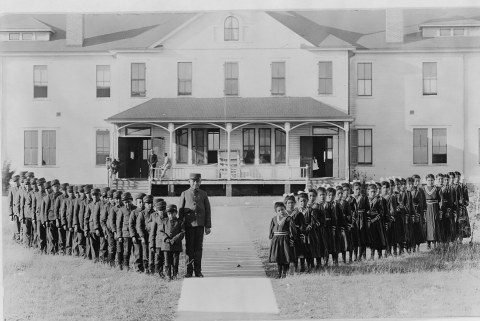 The story of Indian boarding schools is not one of a bygone era. Indigenous people across this continent continue to live with the legacy and memories of terror induced by these institutions, assimilation tactics, and genocide. Those who lived through it or whose families continue to feel the impact deserve, at minimum, our acceptance of this damning truth.

This bill is a positive first step, as acknowledging the truths tribal communities have always known is an integral part of the healing and reconciliation process for all of us. Now we must work with Native peoples to advance efforts to establish this federal commission, as it will encourage further action.

Having run at least thirty Indian boarding schools, Quaker reckoning with these past transgressions is critical. Many Quaker meetings and groups like Decolonizing Quakers have mobilized to reconcile with Native communities with actions that mirror the listening and education efforts of the TRC in Canada. FCNL has also prioritized advocacy that seeks to right some of the countless wrongs against tribal nations.

While we cannot change the past, we can alter the future for many Native peoples. With the introduction of the Truth and Healing Commission on Indian Boarding School Policies in the United States Act and individual and community reconciliation efforts across the country, there is cause for hope.

As violent and traumatic as these acts of cultural genocide were, they were ultimately unsuccessful. More and more Indigenous people are reaching out to their culture as a part of their healing. More traditions are being adopted, ceremonies are being revived, and languages are being spoken. Everything these Indian boarding schools were designed to kill is coming back and thriving.

Perhaps the best way to honor survivors and those who never made it home is to build a society in which the full potential of tribal nations is realized, where Native children are proud of who they are and appreciated, respected, and celebrated as the gifts they have always been.  ~~~

Amelia Kegan is director of domestic policy for the Friends Committee on National Legislation. As FCNL bears witness and lobbies in solidarity with Native Americans, it also honors the Nacotchtank tribe on whose ancestral land the FCNL, FCNL Education Fund, and Friends Place on Capitol Hill buildings stand.