I’m no expert on Quaker history, but I’m familiar with the basic outlines. One general observation I can make about Quaker history is this: Early Friends started by getting imprisoned often for breaking the rules, and then they continued as rule-breakers throughout the centuries. Quakers have broken both government laws and cultural conventions. This pattern of rule-breaking emerges from the same source as our testimonies do: Quaker worship.

It was a convention of the English language in the 1600s to use “thee” and “thou” when addressing a person close to you – a family member, a peer, and (surprisingly) God – and to use “you” and “yours” when addressing persons of nobler birth than yourself. Moreover, British law required commoners to remove their hats and bow to persons of nobler birth, whenever they met or passed by each other. Quakers refused to follow those double-standards of courtesy, and their refusals landed them in prison. The Quaker testimony of “equality” supported, even urged, such rule-breaking.

During many times of war since the 1600s, Quakers have broken rules about military enlistment. The Quaker testimony of “peace” has supported thousands of individuals in refusing to be drafted into military service. Friends were central to the eventual creation of the legally recognized status of conscientious objector.

In courtrooms, it has long been the rule that a witness must swear to uphold the truth, while placing a hand on the Bible (or another holy book). In line with their testimony of “integrity,” Quakers break the rule of swearing oaths because such swearing would imply that they are dishonest the rest of the time.

The practice of sitting in silence together revealed to Friends that the Spirit among them held more value than material objects or social status. With guidance from the testimony of “simplicity,” Quakers began to shun fashion. Upon learning of the toxic effects that fabric-dyeing placed on the enslaved people who did that work, Quakers in the 18th-Century U.S. South began to wear un-dyed clothing, which became an identifiable
American Quaker habit.

At great risk to themselves prior to the U.S. Civil War, Quakers illegally formed a significant part of the “Underground Railroad,” which transferred people escaping from slavery in the South to freedom in the North. The Quaker testimonies of “community” and “equality” supported those actions.

When Black citizens in the U.S. marched in the 1960s for the right to vote, and when they boycotted buses for the right to sit in any available seat, white Quakers were there with them, supporting them. Lew Fredrick, Oregon State Representative from North Portland, spoke at North Pacific Yearly Meeting’s annual session this year. He was a teen during those turbulent 1960s, a protege of John Lewis, and he chose to attend a Quaker college because, he said, the Quakers were the only white people there on the streets supporting the Civil Rights struggle.

As I mentioned earlier, this history of rule-breaking flows directly from Quaker worship. In silent worship, uninterrupted by the prearranged choreography of standing and sitting and kneeling during hymns and recitations, Friends have ample time to ponder and await the inner voice. Friends can listen for hours and years for the still, small voice within. They can hear the voice of compassion. They can hear the voice that says the world doesn’t need to be the way it is. Collectively, an awareness can arise among Friends that guides them to work together to create something more equal, peaceful, supportive of community, fair, sensible, and honest. Quaker communities, upon contemplation and seasoning, can support actions to create such improvements. The patience of seasoning builds a deep foundation of trust and courage that can support long-term change.

I can’t help noticing a contrast between our past and our present. Among Quakers today, very few are imprisoned for breaking rules. Maybe we have been so successful in making social changes that the urgency has passed. Maybe we’ve just become complacent. Or maybe, given our aging demographic, we fear the physical hardships of jail or prison, and we choose not to risk it. Or maybe, whiteness and privilege blind too many of us from certain realities. Maybe all of the above.

I do feel tenderness for “us.” I intend no harsh criticism. I realize that social change makes different demands on different people. For example, I myself have never been to jail, yet I admire Peg Morton from Eugene, Oregon, who was a Quaker exception. Peg spent six months in prison when, in her 60s, she stepped over a fence and trespassed against the School of the Americas. I realize that the path to social change is often not clear. Quakers have been laboring for decades to discern good order on questions of same-sex marriage and gender fluidity. Likewise, Quakers struggled among themselves and were deeply divided over all the “rule-breaking” episodes I listed earlier – that’s four-hundred years of struggles among ourselves. Also, I recognize that rule-breaking is not the only way to work with integrity for a just community, equality, and peace.

Here is my concern. Early Quakers went to prison often for challenging the laws and conventions of their times, for challenging notions of class and challenging the legitimacy of violence. I have no doubt that their courageous actions attracted newcomers, just like Lew Fredrick told us that Friends’ courageous actions in the Civil Rights Movement attracted him. Unless we Quakers are willing to engage deeply and meaningfully with the injustices of our time – to make “good trouble” – we will become irrelevant and likely extinct. Young people want to fix the world quickly (remember?) and then get on with the lives they’d hoped to lead. It’s obvious to them, and to me, that if we aren’t using our collective power to be part of the solution(s), we are part of the problem of maintaining the status quo.

Quakers have an historical gravitas that we could turn toward correcting injustices as they come to light. To receive leadings from the Spirit about systemic injustices, we must pay attention to the world. The agonizing videos of black men and black women being murdered by police and militia – and the protests of Black Lives Matter – grabbed headlines in 2020, but other ongoing injustices remain equally threatening. Climate change, the high incarceration rates of black and indigenous peoples, and the growing failures of our economic system to provide basic needs for an increasing percentage of people – these are just a few injustices that we have known about for years. But maybe we’re not paying attention. 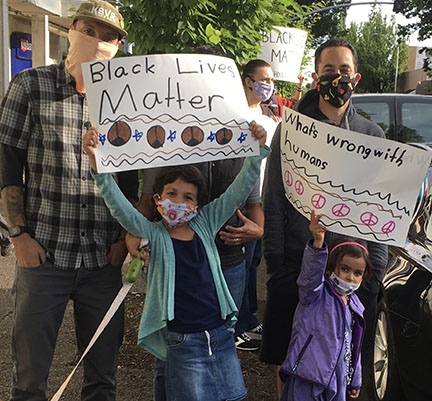 I sometimes wonder whether Quakerism is becoming a spiritual practice for calming our own nerves, like going to a spa. I wonder if we are still able to be courageously responsive to the spiritual potential and challenges of our shared testimonies.

Do you feel the Spirit urging you to seek any changes, internal or external? Over the centuries, Friends have shown that we can create new rules and habits to expand our own awareness and transform lives. We would do well to make new friends in other subcultures, to join BIPoC-led organizations, to build teams in our meetings to research and promote antiracism, and to increase our influence in the democratic process by partnering with Quaker organizations like FCNL and with our own government representatives. We can draw new patterns of rule-making, along with new patterns of rule-breaking, from the history of our Quaker testimonies and from our Quaker worship.  ~~~

Laurie Childers is a member of Corvallis Friends Meeting (NPYM), an artist, singer-songwriter, nonviolence trainer, and former Chair of the National Council of Fellowship of Reconciliation.