Skip to main content
View other articles in "On Reconciliation" issue of magazine.
January 2015, February 2015

Some words and phrases to know before you read

Different Quakers have always had different ideas about war. During the U.S. Civil War, some Friends joined the army to fight against slavery. Other Friends did peaceful work to fight slavery – like secretly helping slaves to escape. This has been true in other wars, too. Different Quakers make different decisions about what to do about war. 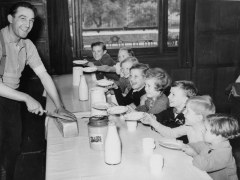 The Nobel Peace Prize is famous all around the world. Every year since 1901, the Nobel Prize Committee decides if someone should get the peace prize. The winner is the person who did the most that year to stop war and help peace.

The Quakers won the Nobel Peace Prize in 1947. They won it for their peace work during many wars – ever since Quakers began. But especially, they won the prize for the peace work they did during two Word Wars, from 1914 to 1945.

When the Quakers won the Peace Prize, two Friends went to Norway to accept it.  One was Margaret A. Backhouse, who worked for the Friends Service Council in England. The other was Henry J. Cadbury, who worked for the American Friends Service Committee in the United States. These two organizations led the peace work that Quakers did during the wars. 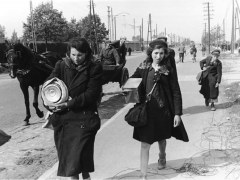 At the very start of World War One, Quakers got ready to help people. The Battle of Marne in 1914 was the first big battle in France during World War One. As soon as that battle ended, Quakers went to Marne to help the people who lived there. The battle left people hungry and homeless and hurt. Quakers brought them food and supplies. They talked with the people and helped them decide what to do. They helped family members find each other. They helped people fix their buildings and roads. They helped refugees find new homes.

The Quakers did this work in many countries during  both World Wars and after. They helped people in Austria, England, France, Germany, Poland, Russia, Serbia, and more. They did not care which “side” the country was fighting on. They only cared that people were hurt by war. They wanted to help.

Some Friends worked for peace by going into the battles. The Friends Ambulance Unit was a group of Quakers who were pacifists. They would not fight in any war, but they would go into battles to pick up wounded soldiers. They helped set up field hospitals to care for soldiers and other people. 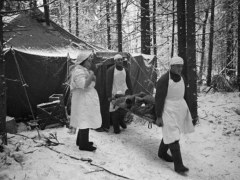 Some Friends worked for peace at home. Quakers in England collected big piles of food and clothing and medicine. They worked together to organize these supplies and to pack them. Then the Friends Service Council shipped the supplies to people who needed them. Quakers in the United States did the same thing. The American Friends Service Committee shipped the packages from the United States.

“The Quakers” are not one famous person who can win one prize. When the Quakers won the Nobel Peace Prize, there was a big ceremony in Norway. Gunnar Jahn was Chairman of the Nobel Committee, and he gave a speech to say why the Quakers had won. He talked about three hundred years of help  from Quakers to people hurt by war. He said that this help was “from the nameless to the nameless.” Quakers won the Nobel Peace Prize because countless Friends work for peace in small ways every day.

When you need to clean up a big mess, what do you do? 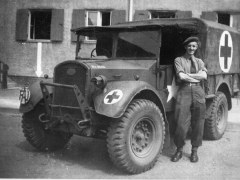 What kind of help do people usually want from you?

How can the world end war?