Skip to main content
View other articles in "On Insight" issue of magazine.
March 2017, April 2017

Last summer (last winter there), we spent several weeks traveling among Friends in Australia and Aotearoa/New Zealand. During those travels, we gained some insights about ways that our yearly meetings in the U.S. could share our Quaker faith more openly with the world around us.

We went “down under” at the invitation of Australia Yearly Meeting (AYM), which asked Marge to deliver the annual Backhouse Lecture at their 2016 gathering, held in Hobart. The topic of her lecture was “Everyday Prophets.” Since Hobart is “only” 1500 miles away from Auckland, New Zealand, Friends suggested that Marge also speak two weeks later at Aotearoan/New Zealand Yearly Meeting (A/NZYM) on the topic, “Attending to the Drawings of the Spirit: Reflections on Nurturing the Spirit Among Us.”

Before, between, and after those yearly meetings, we visited nine monthly meetings and three Friends Centers. Marge led discussions or workshops among Friends in Perth, Adelaide, Melbourne, Wharoonga (outside Sydney), Canberra, Christchurch, Dunedin, and Wellington. She also visited the Silver Wattle Friends Center in the countryside outside Canberra. Carl served as Marge’s travel coordinator, personal assistant, and Quaker observer.

Friends in these countries are few in number (1000 members and 1000 attenders throughout the whole continent of Australia; 1400 total in Aotearoa/New Zealand, counting members, attenders, and children), but they are a big presence in their communities and country. This is largely because Friends down under are open about being Friends.

One place this openness is evident is in the public support that Friends down under display for causes of peace and social justice. For example, several Australian Friends have formed a group of “Quaker Grannies” who don old-fashioned dresses and Quaker bonnets, then set up tables near (sometimes inside) the gates of military bases so they can serve tea and scones, and invite military personnel to sit down for conversations. In 2015, they visited the Shoalwater Bay military facility to serve tea at a joint U.S./Australian planning exercise. In 2016, they served tea at the Pine Gap base in the middle of the country, where the U.S. military coordinates high-level  data for intelligence and drone strikes. They are willing to be arrested as a consequence of these tea parties, although charges and sentences have so far been light, in proportion to the symbolic nature of their protests.

Another example of these Friends’ public activism concerns support for asylum seekers in Australia. Five meetinghouses in the cities of Canberra, Sydney, and Perth have joined with other Australian churches in agreeing to offer sanctuary to more than two hundred asylum seekers who have been brought to Australia for medical treatment, but are in danger of being returned to offshore internment camps on Nauru and Manus islands. The Australian government has earned international condemnation for its policy of detaining asylum seekers who try to reach the continent from the camps by boat. Friends’ offer of sanctuary to asylum seekers is a public statement of willingness to commit civil disobedience in opposition to the Australian government. The call to actually offer sanctuary has not yet been activated, but the national government appears increasingly adamant in its opposition to the asylum seekers.

Climate action is another social movement that benefits from the public involvement of Friends down under. Aotearoa/New Zealand Friends enthusiastically backed an activist lobbying campaign organized by young people to strengthen New Zealand’s climate change legislation. In Australia, a number of Quaker communities are taking the approach of experiencing and knowing more deeply the land where they live. The Meeting in Perth, for instance, gathers monthly on the banks of the Swan River to come to know the six seasons that are recognized by Aborigines there and to learn about use of the river by the Noongar people and by Wadjelas (white people). Each time they meet, they do so at a different site, thus developing a greater sense of the whole river ecosystem. Individual Friends are working to restore the pre-European landscape where they live, planting a range of native species with the advice of local Aborigines.

Given their small numbers, Friends strengthen their political action by basing specific committees in specific regions. Australia’s Earthcare Committee is currently based in Western Australia Regional Meeting (Perth and surrounding communities). The Quaker Policy and Legislation Committee is based in the national capital, supported especially by Canberra Meeting.  Friends can concentrate and coordinate their efforts without the need for each small meeting to have its own comprehensive peace and social concerns committee.

A particularly well-developed area of concern for Friends down under is the concern for acknowledging the First Peoples of Australia and Aotearoa/New Zealand. Relations between European settlers and pre-European peoples in Australia and New Zealand have followed very different trajectories because of their distinct histories of colonization and conquest.  The Maori people of New Zealand arrived only six centuries before English-speaking settlers. They are a strong presence who constitute fifteen percent of the population, and te reo Maori is an official language along with English. The clerk of A/NZYM sometimes addressed sessions in Maori before translating into English.  In contrast, aboriginal peoples who have lived in Australia for tens of thousands of years have no treaty relationships with the government there. Friends respect the lack of consensus among First Peoples about what sovereignty for First Peoples would look like in Australia and what relationships could be between sovereign First Peoples and the current Australian State.

Recognizing these contexts, each yearly meeting we attended was opened with a “Welcome to Country” by someone from the indigenous pre-European community there. Welcome to Country is a ceremony or protocol that Australians have developed in recent years as a way of recognizing traditional peoples (the national Parliament began doing this in 2008). Rather than community elders, both yearly meetings had invited young adults to offer the Welcome – a student from the Tasmanian College of Art for AYM, for example, who performed her own songs. We understand that the practice has begun to spread in Canada and is edging its way into the academic world.

A parallel custom is Acknowledgement of Country. Following the leadership of AYM’s First Nations Peoples Concerns Committee, this practice was adopted for general use in the annual sessions at Hobart. Most Friends who rose to speak in these sessions introduced themselves by name, by meeting, and by the name of the people whose lands they occupy. We were struck by the immediacy of this practice, by the connection it makes to the land, and by the respect it gives to a history that is so much more than a recitation of European actions.  For us, the equivalent would be: “Carl and Marge Abbott of Multnomah Meeting, located on the lands of the Clackamas and Multnomah groups of Chinookan people.”

In an additional form of acknowledgement of First Peoples, some Australian meetings pay a small rent to the local peoples whose lands were taken from them by force. Here is what Queensland Meeting says: “The Regional Meeting acknowledges that the land where we meet and where we live is Aboriginal land. We offer double the Council charges on our Meeting House as rent and many individual Friends also contribute. The funds are distributed to Aboriginal individuals or Aboriginal-controlled organizations in Queensland – our landlords.” 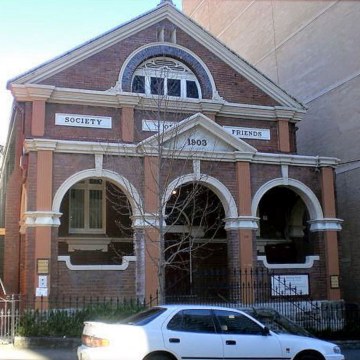 Besides making their presence known through public activities that promote peace, social justice, and reconciliation, Friends down under enhance their visibility through the placement of their meetinghouses. Sydney’s Devonshire Street meetinghouse is a historic building on a busy street only two blocks from the huge central train station, and it will soon be directly on a light rail line that leads to the city center. It has a meeting room, guest rooms, and the yearly meeting office. People pass it continually, going to and from the station or aiming for the nearby coffee houses, restaurants, and bars. Similarly, Wellington Friends Center is situated two blocks off one of that city’s busiest streets; it is a ten-minute walk from the city center; and it offers a meetinghouse, meeting rooms, and guest rooms in three buildings.

Whereas Friends in Sydney and Wellington have enjoyed their central locations for decades, Friends in Melbourne and Christchurch have made deliberate choices recently to enhance their visibility. The Melbourne Meeting recently sold its well-loved old property in a green, leafy neighborhood and bought a two-story office building in a visible location on the fringe of downtown (rather like San Francisco Meeting). When renovations are finished, the meeting room will be upstairs, and a library and a Friends Center will be on the first floor. And money is expected to be left over for social action.

Christchurch Meeting in New Zealand faced a hard choice after a devastating earthquake rendered its Meetinghouse unusable in 2011. Their ultimate decision was to buy and renovate an auto repair shop on a busy street, opposite a large sports stadium. The big sign that once said something like “A-One Auto Service” now proclaims “Quaker Centre” in bold letters.

Guided by a similar enthusiasm for outreach, each annual session of AYM and A/NZYM includes a major lecture that is open to the public. Even in the small city of Hobart, the site of the 2016 session of AYM, dozens of community members joined Friends to hear the Backhouse Lecture. Similarly, A/NZYM sponsors a Quaker Lecture for Friends and the public, and expects the speaker to repeat the talk in other cities and venues. This year’s speaker for A/NZYM in Auckland was Marian Hobbs – a Quaker, a former Member of Parliament, and the Minister for the Environment in the New Zealand government – who spoke about nuclear disarmament to a large audience. 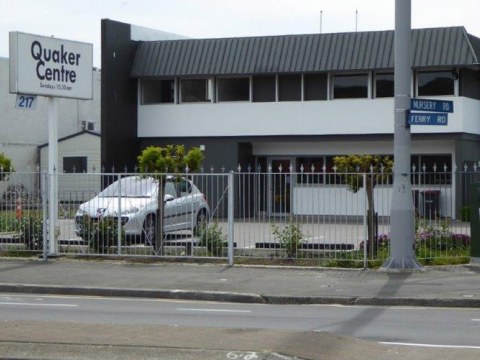 Australian and Aotearoa/New Zealand Friends reminded us of the importance of coming prepared to business decisions. In slightly different ways, they share the practice of circulating committee reports and documents in advance of annual session, and reflecting on and revising those reports before coming together to consider them. Too often our own yearly meeting sidetracks itself into redoing the work of committees and never delves deeply into the spiritual calling behind specific actions.

Through all the activities and decisions that we observed among Australian and Aotearoa/New Zealand Friends, we were reminded that Friends’ special calling is to understand and articulate the spiritual basis for the actions that we take. Friends down under take actions in ways that express their Quaker faith in peace, hospitality, and universal human dignity. Whether it’s serving tea to soldiers, learning new traditions from aboriginal peoples, situating their meetinghouses in busy city centers, or inviting the general public to Quaker plenary sessions, Friends in AYM and A/NZYM do their best to act in ways that reach toward the Light in others. Friends in the U.S. can learn from these examples, which reflect familiar words from the gospels: No one after lighting a lamp covers it over with a container, or puts it under a bed; but he puts it on a lampstand, so that those who come in may see the light. ~~~

Marge and Carl Abbott are members of Multnomah Friends Meeting in Portland, OR (NPYM). Marge is a released Friend whose book To Be Broken and Tender: A Quaker Theology for Today was published by Western Friend. She is currently finishing a book on prophetic ministry among Friends. Carl, when not serving on a host of Quaker committees, studies both cities and science fiction, resulting in his most recent book, Imagining Urban Futures: Cities in Science Fiction and What We Might Learn from Them.