Skip to main content
View other articles in "On Weapons" issue of magazine.
January 2019, February 2019

Ultimate Peace, Inc. is a nonprofit organization that runs a summer sports camp, teaching ultimate frisbee to Muslim and Jewish teenagers near Ashkelon, at the edge of the Negev Desert in Israel, about eight miles from the Gaza Strip. For many years, I have helped to manage this organization from afar and have long been inspired by stories of Jewish and Muslim teenagers meeting each other, building relationships, and learning how to resolve their disagreements peacefully. But, after being asked to assume a greater leadership role, I felt that I had to see it for myself. My son, Aidan Murphy, had just graduated from college, and the timing was perfect. 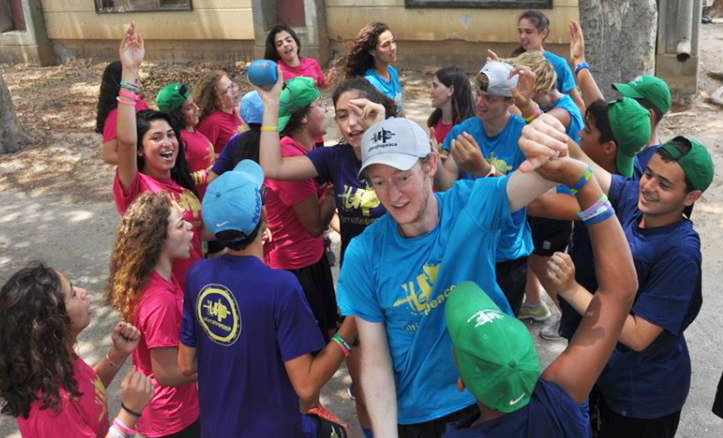 We are occasional attenders at Colorado Springs Meeting and very serious about our sport, ultimate frisbee. Ultimate and Quakerism share basic values of integrity and peace. And while the other principles of Ultimate Peace (mutual respect, friendship, and fun) are not exact matches to other Quaker testimonies (simplicity, community, and equality), they are pretty close. In surprising ways, Ultimate Peace, Inc., a secular organization, manifests the lived values of Friends.

The daily routine of Ultimate Peace camp will be familiar to anyone who has attended soccer or basketball camp in the U.S.: a full slate of training, drills, chalk talk, scrimmages, and games, together with the many activities and “team building” exercises needed to fill up the empty hours for a bunch of hyperactive teenagers away from home. But ultimate is rather unusual in today’s competitive world in that the sport - even at its very highest levels - is entirely self-officiated. It includes no sideline referees. This requires ultimate players to develop certain dispute-resolution skills since, after all, the point is to play and have fun, not scream at each other. For Ultimate Peace, Inc., it is the perfect vehicle for bringing different peoples together.

Camp begins with the arrival of the coaches for several days of orientation and preparation. The coaches, mostly young adult players or former players – with a few older types thrown in – come from all over Europe, North America and the Middle East.

All coaches are expected to raise a certain amount of money to support the organization, and their time and travel are not compensated. Put differently, they work and plan and raise money all year for the opportunity to come work thirteen-hour days for two weeks in the hot desert for free. The kids arrive a few days later, with every member of the coaching staff meeting the buses as the campers arrive. 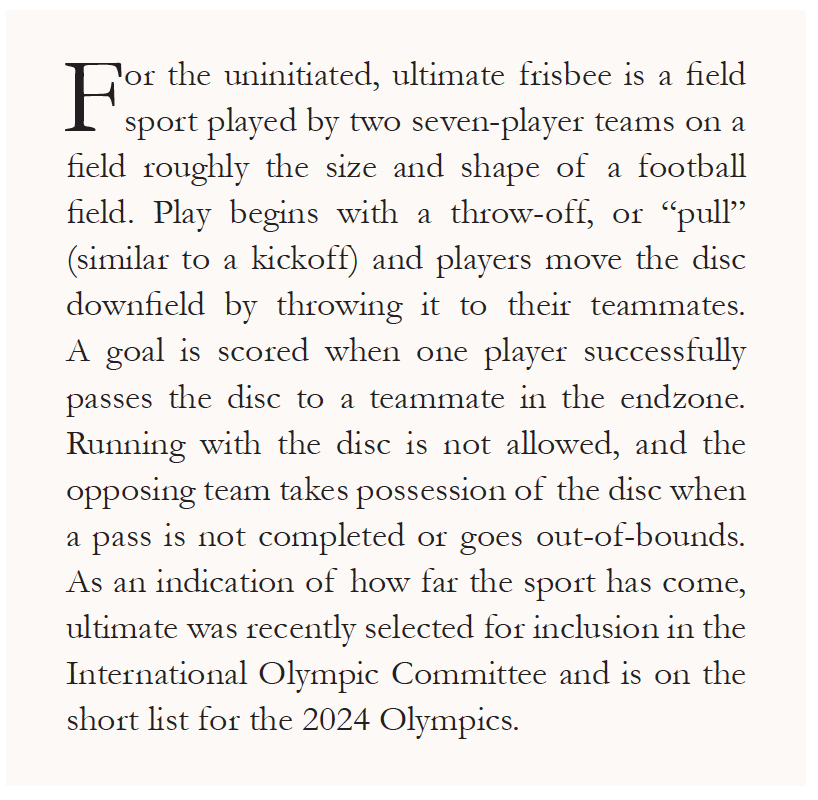 The campers are boys and girls 11-14 years old, and come from Muslim, Jewish, and Christian communities around Israel and the West Bank. (Unfortunately, due to extreme tensions this year, we were not able to take any campers from Gaza.) Each team consists of about a dozen campers, four or five coaches, and two or three Leaders-in-Training. The LITs are 15-18 year olds who have attended camp in the past and who train year-round for the opportunity to assist the coaches. They work from 7:00 am to 11:30 pm every day – translating for the coaches, demonstrating drills, and wrangling 12-year-old boys. Their energy and enthusiasm seem boundless.

One feature of Israeli life is that the disparate communities living right next to each other can be completely siloed – kids may grow up just a few miles from one another without ever meeting. This leaves impressionable minds vulnerable to ugly stereotypes about the evil “other.” But at camp, Jewish and Muslim kids spend the time in each other’s constant company. Eating, sleeping, playing, and (inevitably) sorting through conflicts with each other makes it especially difficult to carry those stereotypes back home. Friendships are formed at camp between individuals who would otherwise meet only across a barbed wire fence.

Every day, our lesson plans center around one or more of the core values of ultimate frisbee, both on the field and in our various activities. For example, if you inadvertently violate the rules of the game, you are expected to have the personal integrity to own up to it, even if no one else saw it, and even if that admission puts your team at a competitive disadvantage. We teach our young charges that accepting personal responsibility is vastly more important than any momentary disadvantage on the field. The team is encouraged to support their teammate’s integrity by trying that much harder to make up for the disadvantage.

Working with younger teenagers is challenging, fun, and endlessly rewarding. But by far the greatest impression of my experience was working with the young coaches from around the world. My team’s coaching staff consisted of two Israelis, a German and three Americans. Leibo is a 22-year-old former officer in the Israeli Defense Forces. Tall, strong, fit, and fast, he looks like he could kill you with his bare hands (and he probably could). His voice is a cannon that commands immediate respect, and when he speaks, the boys listen. But he is just as kind and gentle as could be with the young boy who’s never been away from home before and kinda misses his mom. Ohad from Tel Aviv graduated from the LIT program this summer. He tells me he’s 18, but I’m not sure I’m buying it. Not like any 18-year-old I’ve ever met – he seems like a grown man to me. I guess living in Israel makes you grow up fast.

Luka is a 24-year-old graduate student from Berlin, the only woman on our coaching staff. She’s the veteran of the group and the de facto head coach for our team. The big, burly Israeli Army boys have no trouble at all deferring to her. Never any need to raise her voice, she is very quietly and firmly in charge. And then we have Caleb, an elite national player in his age group, enjoying his summer between high school and college. Fortunately, these are our leaders of tomorrow.

On Thursday morning, word quietly circulated among the coaches about increased rocket activity around Gaza, just a few miles away – a stark reminder of the world outside the gates of our camp. Everyone living in southern Israel knows their number – the number of seconds you have to get to a bomb shelter once the siren goes off; the closer you are to the Gaza Strip, the lower your number. Ours is 30-40 seconds, which we are told is “plenty of time.”

All morning I heard, off in the distance, noises that sounded vaguely like thunder. When I realized there wasn’t a cloud in the sky, I asked one of the LITs what I was hearing. This 17-year-old boy calmly explained that we were hearing mortar fire – nothing to worry about, he assured me, since it couldn’t reach this far.

Rockets, on the other hand, are a different matter. Israel’s “Iron Dome” missile-defense system can calculate (apparently with astonishing accuracy) where a rocket will land within seconds of its launch. If the rocket is heading for an unpopulated area, the Israelis let it go, and it lands somewhere out in the desert. If it’s heading for a populated area, however, the sirens go off. Even if the Iron Dome successfully intercepts a rocket, it’s likely that the skies will rain fiery debris for several dangerous minutes.

Our siren went off at dinner that evening. As a life-long American, this is a surreal experience – especially that moment when you realize that this is not just another fire drill – someone is actually trying to kill you. For me, that moment was closely followed by the realization that I was somehow responsible for the safety of a gaggle of 13-year-old boys and they were not with me at the moment. It was difficult to hold both thoughts in my head at the same time. The sight of the boys filing out of the cafeteria under the guidance of my fellow coaches removed (temporarily) the second concern, and into the bomb shelter I ducked. The all-clear signal sounded a few minutes later, and life very quickly and amazingly went back to normal.

As the week wrapped up and we said goodbye to the kids, I found myself oddly grateful for the rocket attack, especially since no one in our area was harmed. Camp can be a pleasant little bubble, locked away behind gates and fences, safe from the ugly outside world. But on Thursday, the ugly outside world muscled its way through the gates and plopped itself in front of us for all to see. The roles of camper and coach were reversed for a few hours – the kids, who had lived with this threat from birth, were utterly non-plussed and unpanicked; the American coaches worked really hard to appear so. In a heartbeat, the geopolitical conflicts of Israel-Palestine, previously somewhat abstract, became personal.

Aidan had a similar realization just a few days later, that this conflict is not a simple clash of right and wrong. After sharing pictures of his experience with friends back home, one immediately responded by asking Aidan to boycott spending money “supporting the apartheid regime in Israel.” Although prior to attending Ultimate Peace camp, Aidan might have been tempted to agree with that sentiment, the time that he spent with the people of that region convinced him that nothing is anywhere near that simple. Believing that one side or the other is all right or all wrong belies the truth of what we saw and hinders the cause of peace.

There is a story we tell in Ultimate Peace camp about starfish. One day a man is walking along the beach at low tide, and he spots a little girl picking up starfish stranded by the tide and throwing them back into the sea. He asks her what she’s doing, and she brightly responds, “Saving the world!” The man chuckles a bit to himself and asks, “Saving the world? What do you mean?” The little girl picks up another starfish, hurls it into the surf and points. “Just saved his world,” she replies. Ultimate Peace, Inc., offers no pretense that it is working to achieve peace in the Middle East. Our goal is much more modest: to create peace in the hearts of Jewish and Palestinian teenagers, one starfish at a time.

Brian Murphy is a member of the Ultimate Hall of Fame and has played Ultimate most seasons since 1976. He occasionally attends Colorado Springs Meeting with his son, Aidan, and wife, Molly Wingate, clerk of IMYM.