Skip to main content
View other articles in "On Media" issue of magazine.
September 2016, October 2016

Nurturing Ministry in Our Meetings - Excerpts

It’s a pleasure to be with you all. I’ve been carrying you, without knowing any of your faces, for months. So it’s great to have faces attached to the carrying.

This picture of these two tango dancers is called “the frame” [points to a projected image]. This is the basic place you stand in the beginning of tango. These two dancers are beginners, and you’ll notice a couple things here. The form of it is right, but they simply have their arms around each other. They’re still trusting their own feet and their own balance. You can’t really dance tango that way. You don’t really generate enough energy that way, sexually and otherwise. So, what we see with this second pair of dancers [new slide], who have been dancing for much longer, is a different kind of dynamism. If this guy were to suddenly vanish, she would fall. If she were to suddenly vanish, he would fall. There’s a mutual vulnerability in their press against each other. They’re not merely having their arms around each other. With the beginners, if either one of them would disappear, the other one would still be fine. But with these experienced dancers, with this press, you have a commitment to the other body such that if the other body left, you couldn’t do your job.

It’s a tension, but it’s not combative. They’re not fighting here. But they are pressed up against one another so powerfully that they need each other to continue pressing.

So, what I am saying is that the meeting and the individual, they are pushing on one another, and you can imagine some people saying they are in conflict, but they need one another to dance.

The earliest version of the traveling ministry of the Religious Society of Friends centered largely around the query, “How is truth prospering among you?” That’s a very different question than, “What truth is there?” The question, “How is truth prospering?” is not asking, “Do you have it or not”? Instead, it conveys a vision of truth as an organic thing that can grow more powerfully and more beautifully.

One version of truth prospering is that I, in my context, have experienced something powerful and true, and as a result of experiencing that powerful and true thing, which has borne fruit, I take that fruit, carry it to Intermountain Yearly Meeting, and say, “Here, here’s some Truth we found. We hope you’ll plant it.” The other metaphor is a little riskier. It’s grafting. It’s saying, “Here. I think there’s Truth in this, even though I can’t tell you I’ve seen the fruit of it yet. But it seems like it will bear fruit.” The original role of travelling ministry was to take the truth that was prospering and carry it from meeting to meeting.

And if we can say what ministry is, then we ought to be able to talk about what a meeting is. Or better, talk about, “What a meeting is for.” My hunch is that if this became a practice – to ask in your meeting what your meeting is for – you would find out that you have some things in common. And would it be so bad to tell newcomers what it is that you’re about? Would it be so bad if you had a website and could say on the website, “We’re for this”?

When I think about my own meeting, this is the one-sentence version of how I see it: Ideally, a meeting is a community-forming gathering of people seeking to enter a committed and always-deepening relationship with one another and with God.

Notice: “Ideally.” In practice, a meeting is a wonderfully human and messy and fragmented constellation of ideal pieces and a variety of other things. That doesn’t mean our meetings are bad. We’re constantly going to be in this dance, remember? That press of the tango, that movement of one against the other. We’re going to be having people coming into our meetings. We are going to have people in our meetings who are growing. So the tension will always be there between this ideal notion of a meeting and the reality that people have their own stuff going on.

And too often, our meetings are like those people just beginning to learn to dance – our bodies are technically right, but there’s no love or pressure.

So now I want to talk about what happens when ministry and meeting are in fruitful, faithful dancing. What does that look like? So ecologists tell me [points to a diagram] that there is interior habitat and there is edge habitat. And there are interior species and edge species. So, you have this little froggy guy in the edge habitat, but you don’t see the froggy guy as much in the interior habitat. Maybe that’s because, if froggy was in the interior, the bear would eat them. At the same time, part of the reason that there can be froggies at the edge is maybe because the coyotes won’t come in because the bears are there. If the bears were gone, the coyotes would come. We don’t have an edge if we don’t have an interior.

So those of us who are in very public, outward-facing ministry are supposed to be doing that. But when we come back home, if there’s no home there, how long can we keep going? Meanwhile, if you are a nurturer of gifts, if you are a supporter of ministry, and no life is leaving your meeting for anywhere else, how long will you stay? There’s a dynamic tension between those who support and elder and nurture, and those who are flung out to service in the world. And sometimes the same people do different things at different times in their lives. 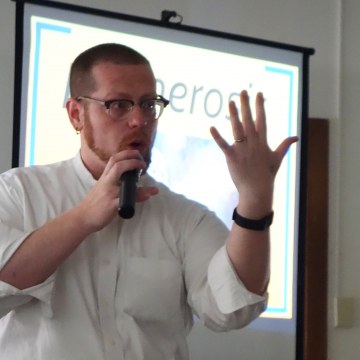 Now, the exciting part about this is: At the edge of any habitat, it will bump up against another habitat. And that space in the middle is called an ecotone. What biology says is that, invariably, the diversity of biological life in those in-between spaces is greater than in other spaces. So when we send people out from our meetings to serve in the world, we’re bringing vibrancy and life back into our meetings. They’re bringing in new perspectives. We can’t just send them out, and never receive them back. We have to say, “What truth did you find Friend, when you were on the road?

We don’t need to replicate the past, but listen to this. When we were most well-known for the work we were doing for abolition of slavery, during that time, many more Friends traveled in public service. I don’t know if we could do that again. But those are days that we look back to, that we most cherish. And those are the things that people look to us for, for the faithful work in the world, because they need people in the world doing work. Friends had their gifts named by their meetings, they were held accountable, and they tried to bring part of the Good News into the world. This is still possible.  ~~~

Callid Keefe-Perry is a traveling minister from Fresh Pond Meeting in Cambridge, MA. He is a husband, a father, and a PhD candidate at Boston University’s School of Theology. This text was excerpted from a full transcript of his presentation to Intermountain Yearly Meeting, “Living in the Dashes: Ministry and Meetings,” which is posted at: westernfriend.org/media/living-dashes-ministry-and-meetings.