Not the Final Word

Part of my dad’s job with the American Friends Service Committee was to take speakers around to various college campuses, churches, and summer institutes. As a kid, I sometimes went along and got to meet such spiritual giants as peace activist A.J. Muste and civil rights leaders Bayard Rustin and Ralph Abernathy. During spring vacation in 1956, my dad decided to take my brother Paul and me to Montgomery, where the bus boycott was four months old. 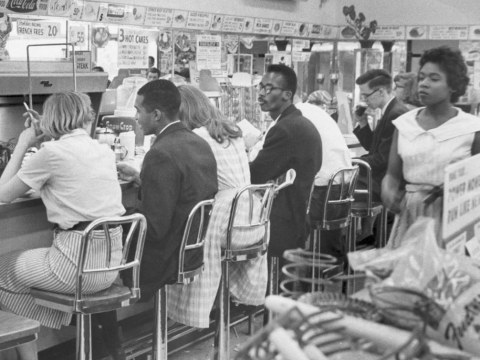 On the way, we stopped overnight at Koinonia Partners, an interracial Christian community in rural Georgia. I was fifteen years old, and I had never been in the South. I knew of Koinonia only because we bought pecans by mail order from their farm. The week before we were there, members of the local Ku Klux Klan had driven by one night and shot a gun through the wall of the guesthouse, which was where we stayed. My clearest recollection of that trip is of sleeping on a bed with a hole in the wall about a foot above me.

Ralph Abernathy welcomed us warmly when we got to Montgomery. He took us around to see for ourselves the total segregation of neighborhoods and churches, swimming pools and buses. We visited a church that had been bombed less than a month before we arrived. The sign out front naming the pastor and the sermon topic was destroyed. Inside, the pews were piles of splinters. The cross at the front of the church’s sanctuary was hanging sideways and shattered. I simply could not understand how white Christians could do this to black Christians.

I was also stunned that the victims of this violence were persistently saying that they were not going to give up their struggle for justice – and that they were committed to trying to love their enemies. During that trip to Montgomery, I was deeply moved by the many people who chose to walk with dignity, rather than ride buses as second-class citizens. Seeing people get up an hour early to walk to work, and then get home an hour later than usual at night – while refusing to hate the people who were imposing the hated system of segregation – was profoundly inspiring and life-changing for me.

At one meeting we attended during that trip, we were greeted by Martin Luther King, who said, “these young people from the North have come to see the freedom struggle.” He was young then, although twenty-six seemed old to me at fifteen. I had no idea that he was going to become one of my heroes for life.

On August 6, 1958 – Hiroshima Day – I participated in a peace vigil at the White House – an all-day plea to end nuclear weapons testing and the nuclear arms race. At the end of that day, I went to Washington, DC’s Florida Avenue Friends Meeting for a period of silent meditation. There I received the closest thing to a leading that I had ever experienced. I felt a deep clarity, as if the Great Spirit were speaking directly to me: “You should go to Howard University.” I transferred to Howard my sophomore year.

Five months later, on February 1, 1960, four students sat down at a lunch counter inside a Woolworth’s store and launched the student sit-in movement. In Maryland and Virginia, almost everything was segregated – restaurants, hotels, movie theaters. Even African ambassadors to the U.N. would not be served there. So my friends from Howard and I began going to lunch counters on Saturdays.

We would show up at a drugstore and try to get something to eat. Invariably, the lunch counter would close down, and we would be arrested. I spent many weekends of my sophomore year in jail. We sang freedom songs and shared stories to enliven our spirits behind bars. First thing Monday morning, we would be in court, and back in classes not long after that – until the following Saturday morning, when it happened all over again.

On June 10, ten of us I walked into the heart of the hatred and sat down at the lunch counter at the People’s Drug Store in Arlington, Virginia. Within minutes, we heard sirens from several directions. But the storeowner told the police he didn’t want us arrested. He closed the counter and refused to serve us food. We stayed until the store closed that night and then went back the next morning.

Those two days were probably the most challenging of my life. We grew very hungry as the sixteen-hour days stretched on. All sorts of racist epithets and chants of “Go back to Russia” were hurled at us. We worked at remaining calm and peaceful, which became harder as the harassment escalated to physical attacks. People spat on us. They shoved lit cigarettes down our shirts, and one angry man threw a firecracker at us. They kicked us off the stools and punched us so violently that we fell to the floor.

Late in the evening of the second day, I heard a voice behind me say, “You nigger lover. Get out of this store in two seconds, or I’m going to stab this through your heart.” I turned to see a man with the most terrible look of hatred I had ever seen. His eyes blazed, his jaw quivered, and his shaking hand held a switchblade – pointed at my heart.

Loving my enemy was suddenly more than just a discussion in Sunday school or a confrontation among schoolboys over ice balls. For a fleeting moment, I doubted that Jesus actually meant to include this man among those who deserve to be loved. Then I felt grateful for the many hours of nonviolence training and role-playing we had engaged in.

I tried my best to smile. Looking him in the eye, I said, “Friend, do what you believe is right, and I will still try to love you.” Both his jaw and his hand dropped. Miraculously, he turned away and walked out of the store.

That was the most powerful experience of my twenty years of life. It confirmed my belief in the power of love, the power of goodness, and the power of God working through us to overcome hatred and violence. At that moment, nonviolence became much more to me than a philosophical idea or a tactic that had once made a difference in Gandhi’s India. It became the way I wanted to relate to other human beings, a way of life, a way of working for change.

When King was killed several years later, I was devastated. I fell into a state of shock and depression. Losing that beautiful and powerful spiritual leader was a terrible setback. It felt like the possibility for transformation of our country had been irretrievably shattered.

I eventually realized that I faced a choice – to stay in a depression or to commit myself to continue the work that King had begun. Nothing we would do could bring King back. But we understood that his spirit and his dream lived on in our efforts. Death didn’t have the final word. ~~~

David Hartsough is a member of San Francisco Friends Meeting (PYM). The above story comes from Chapter Two of David’s book, Waging Peace: Global Adventures of a Lifelong Activist (2014). To read the complete chapter, go to: www.peaceworkersus.org/docs/wagingpeace_chapter2.pdf. Copies of the book are available from Peaceworkers at a sliding-scale price of $20 to $25 (postage included). Send a check to: Peaceworkers, 721 Shrader St., San Francisco, CA 94117.