It helps to belong somewhere. Belonging can be quite healing.

This is a big reason that people in my monthly meeting and yearly meeting are working to make those spaces more welcoming. We hope for a greater diversity of people to feel like they belong to our meetings. We hope for them to find the healing they need there.

Recently, my friend Shawna Thompson, a Navajo woman, was the clerk of Pima Friends Meeting. Shawna found out she had pancreatic cancer last February and died in May. I learned a lot from her about the importance of belonging to a place and the importance of accepting who I am. 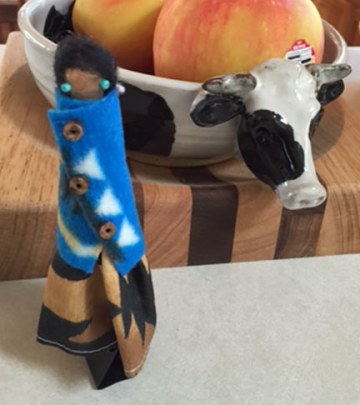 When I was growing up, there was something about my family that made it difficult to grow up. My adolescence began in 1980, when women were just beginning to be able to have careers beyond nurses, teachers, and secretaries. My parents were still of the mindset that women followed what men decided to do and that the husband’s thoughts about what was going on were the most important ones.

It has taken me many years of hard work to learn to be assertive and to learn that I don’t need to be ashamed of myself.

When Shawna recommended the book White Fragility, I thought I really didn’t need to read it – that was not one of my primary concerns. Then, when someone in Pima Meeting announced that a book group would be starting soon to talk about racism, beginning with the book White Fragility, I felt really irked, because we had just completed four religious education classes on racism, and there were other things to talk about. Then COVID happened, and the staff at the school where I work decided to hold an online book group about White Fragility, and finally, I was ready to go. I read the book and agreed with D’Angelo’s thesis – that the defensiveness with which White people respond to comments about our own racism stops the conversation that helps us become less racist.

Participants in this book group shared other resources. One woman posted a list, “The Characteristics of White Supremacy Culture,” which comes from Dismantling Racism: A Workbook for Social Change Groups by Tema Okun and Kenneth Jones (2001). I read the list and thought, I know these things – these are things I learned growing up and also things I learned about while I was in the process of overcoming the emotional repression I grew up with.

I see my life as a journey of gradually emerging from emotional rigidity to becoming a more whole human being. What does this have to do with everybody else, specifically race relations? The characteristics of white supremacy culture that are named by Okun and Jones are habits that make it impossible to be vulnerable in community. The habit of perfectionism means that people are constantly being measured against impossible standards. The habit of continuous urgency means that people can never relax and be in the present. The habit of defensiveness means people have little desire to hear other points of view. These habits do not foster a welcoming community.

People from native cultures often have helpful perspectives for the rest of us who sometimes don’t know what we are doing. Many native people have connections to something powerful, a rootedness, like a tree, with roots that go way, way down. This connection is something good for all people to have. Most of us can only imagine what it must be like to live in a place where your family’s history goes back thousands of years.

I had a small glimpse of that kind of connection right after college. I was able to make a trip to Scotland, where the Calhoun side of my family is from, and I was able to visit the former estate of the Laird and Lady Colquhoun. I saw the remains of the castle and a twelfth century chapel, and I got to swing on a little wooden swing that hung by the waters of Loch Lomond. I was able to imagine what it was like to be a person 800 years ago, and I was able to feel connected to that long stretch of time.

I had other glimpses of that deep connection recently in Hawaii. My husband’s niece has a place on a beach in Molokai and we were invited to go after my husband’s daughter died. I experienced such peace there. We just sat on the boat ramp and watched the waves. The pounding of the waves cradling my blessed brain, a brain that needs ways out, a little protection, a little freedom from rules and structure sometimes.

One thing Shawna taught me was to become aware of the people who originally inhabited the land that I am on. And I was aware of native people as we vacationed on Molokai. I had a sense that my husband and his family and I did not have the right to be there – on land taken over by White people with little regard for native people.

So, when we left Hawaii, I felt a need to thank a native Hawaiian for letting us come to their land and have that beautiful experience. I said this to our shuttle driver at the Honolulu airport. I asked her what she thought about the movement for about Hawaiian sovereignty.  She seemed to appreciate the question and said that she would like the decisions of the Hawaiian kings and queens to be honored.

Asking these questions and being part of these conversations made me feel bigger, more able to connect with the lives of the native people who live there today.

Native peoples have connections with places that go back hundreds, even thousands, of years. Most of us cannot understand how wonderful that connection would be. If we did, we would honor it, and we would honor the people who hold it.

Last April, a small group of Shawna’s friends (including my husband and me) traveled with Shawna and her mother to Monument Valley, on the Navajo reservation. Shawna was very sick, but determined to see her homeland again. Once we got there, my husband and I accompanied her in our car down into the valley. There, Shawna had a revelatory experience. After she had a conversation with a Navajo woman at one of the stables, she came back to the car and – she woke up. She asked, “What has happened? How did I get here?” She had forgotten the previous two months of illness. She was awake like she had been before she got sick. She had renewed energy and an expansive sense of presence to life returned. She even started eating more, and some of us wondered if she might get better. We returned home and she eventually died, but at least she left this world with more of herself intact.

People who are different from us carry valuable perspectives. A sense of community with them, belonging with them, being friends with them, is something to treasure. ~~~

Susan Calhoun is an educator who enjoys exploring southeastern AZ with her husband and miniature schnauzer. She is a member of Pima Monthly Meeting in Tucson, AZ (IMYM).