Skip to main content
View other articles in "On Home" issue of magazine.
September 2017, October 2017

As I thought about where to start this talk, my mind went to a moment many years ago, when my friend, Nadine Hoover, challenged me to write my own statement of conscience. She had been spending a lot of time with young men who were struggling with the issue of conscientious objection. As they worked together on their statements of conscience, trying to articulate why they were choosing that path, she realized this was a process we should all be engaged in. After all, conscience is not limited to people of a certain gender or a certain age. So I confronted the question: “To what do I conscientiously object, and why?”

Here is a little of what I wrote back then: “I believe that a culture of economic materialism damages the soul and damages the fabric of society. It sets up a false god, squanders our resources, threatens our earth, distracts our attention from real issues and needs, and separates us from each other and from our higher selves. . . Its internal requirement, to accumulate profit and gain power, regardless of the cost to humanity or the earth, sets us on the path to total destruction. It is the greatest evil that I know, and everything in me – my brain, my heart, my conscience – cries out against it.” 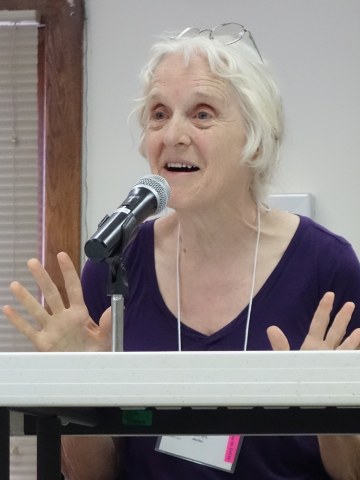 I have held an interest in economics basically all my life. My father was an economist. When I was nine or ten, I helped him with his college multiple-choice exams. He would ask me a test question, about which I knew nothing. I would offer an answer that made sense to a ten-year-old, and he would use that as one of the options. I felt like my mind was valued.

I had my struggles with my father, but this was a big gift. I learned that I had a right to look around this territory, even without any formal training, a right to notice things that seemed inconsistent, a right to use the language, a right to ask questions.

My interest in money and economics grew in my young adult years. I was blessed to be part of Young Friends of North America and then the Movement for a New Society, both communities that took the quest for “right relationship” seriously. We were all asking big questions about how the world worked and how to do the right thing.

I remember the refrigerator question. Did I have a right to a refrigerator? There was no reason in the present to give it up, and I wasn’t seriously considering it. But what if I came to the point where I felt that I couldn’t do without one? Would I find myself protecting my possessions from those who had none? I still think it’s a good question.

Fast forward to the summer of 2014. After some very lean and painful years when Philadelphia Yearly Meeting had to lay off over a third of our paid staff, finally, we heard the good news: Spending was stable; resources were up; income was showing a tendency to rise. If the stock market just continued to grow, we could anticipate more reassuring financial statements for years to come.

“If the stock market just continues to grow . . . ” That phrase rang in the ears of several of us who were active in our Friends Economic Integrity Project. What a paradox! Our yearly meeting depended on growth in the stock market. Yet that growth is a driver of economic inequality and environmental destruction.

Several of us gathered at the end of that annual session to scratch our heads together. We had more questions than answers. But we knew they were important questions. So four of us took on a writing project that produced the book, Toward a Right Relationship with Finance; Interest, Debt, Growth and Security.

How do we find our way, as investors and debtors and workers and citizens – as Friends – through this tangle of knotty issues? How do we best manage our money and best navigate the larger economic environment? We can start by using the testimonies as a framework.

Integrity: We can’t make much progress without acknowledging the importance of integrity and being honest about where it is lacking. Clearly, integrity is massively lacking in our economy as it currently functions. And we are entangled. But while a goal of purity may be beyond our reach, that doesn’t mean we need be immobilized or silenced. There’s always one next step we can take toward aligning our practices more closely with our values.

Simplicity: Our economic and monetary systems, as they currently function, depend on continuous growth (which breeds inequality and environmental destruction). To create a growing market, more people need to be steadily convinced that they need more things. And here is a place where we as Friends know something about just saying no. We know something about choosing against the drumbeat of materialism, and for the non-material goods that are more likely to meet real needs.

Equality: Our economy, when free of government intervention, steadily widens class differences. Add to this the role of racism, and the great transfers of wealth from communities of color to the white world, and we have a real mess. How on earth do we respond? We can begin by taking on personal and community practices around money that tend toward greater equality. On a wider level, we can put our weight behind practices that pull down the accumulation of excessive wealth. The city of Portland, Oregon, for example, has just passed an ordinance that adds a tax to corporations whose CEOs make more than 100 times the average of their workers. (In 1965 the average was 20-to-1. By 2013 is was almost 300-to-1.) Similarly, we can put our weight behind policies to pull people up out of oppressive debt. Finally, we can support the kind of government policies that promote a middle class: efforts to raise the minimum wage; support for college education; a revised personal income tax structure; or even a guaranteed minimum income.

Community: Since our current economic system depends on getting people to act individually and on the basis of greed, any efforts to retain parts of the economic system in community are part of the solution. The Bank of North Dakota provides a good model. This bank, the only state bank in the country, has done much to keep local resources local, and it helped the state ride out the national recession of 2008 with minimal economic dislocation. But you don’t have to live in North Dakota to keep your liquid assets in your local community. Credit unions are wonderful institutions where debt and interest stay in local systems.

Thinking particularly about investments, we can all revisit our choices, with the goal of aligning our practices more closely with our testimonies. Finally, we can choose to invest in our common security by plain old sharing of wealth through groups like Right Sharing of World Resources.

Peace: I remember someone coming back from a demonstration against the war in Iraq and talking about a sign they saw: “What is our oil doing under their sand?” That sign spoke to me. To a large extent, war is fueled by inequality and the demands of a growth economy in a world of increasing scarcity. Removing economic injustice from the world would certainly defuse a lot of conflict.

I want to conclude by reminding us that while we are entangled, we are not immobilized, and we need not be silenced. We have many roles: as debtors, investors, community members, citizens. Even though these issues are way bigger than we are, nothing will happen if individuals don’t act. After all, we are God’s hands.  ~~~

Pamela Haines is a co-author of Toward a Right Relationship with Finance: Debt, Interest, Growth, and Security, published by Quaker Institute for the Future (2016). Text from the talk above has been excerpted from a complete script of the talk, posted at: westernfriend.org/media/money-and-soul-unabridged