Skip to main content
View other articles in "On Mixture" issue of magazine.
November 2018, December 2018

In Memory of Mary Dyer 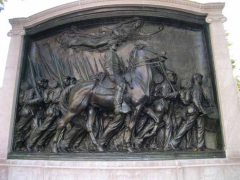 The martial music plays, bronzed alive
only the invisible songs survive
to fuse two sculptures in a final swoon
singing today’s melodies of hope and doom,
the Holy Spirit’s breath whispering between them
as Mary Dyer speaks to the Colonel’s men,
urging them to ascend to Jesus once again,
chanting songs of the beginning and the end

The bronzed symphony of Colonel Shaw
beats his 54th Black Regiment answer.
A bas-relief Winged Victory hovers over guns
as men march out sharply at a quick-step run.

who left everything behind to serve the Republic.
Meanwhile, high on her pedestal, idyllic,
Mary Dyer sits in silent repose,
speaking stillness in a meditative pose.

Mourning doves flutter about her frozen hair
cooing a lament into the disappearing air
as I remember what she said near her ending
`I am already in paradise,’ never otherwise pretending,

hovering above all in the late October air
as if to call back and forth to the Colonel
nearly overcome by his soaking shower of tears
as they meet in an apotheosis of freedom and of grief. 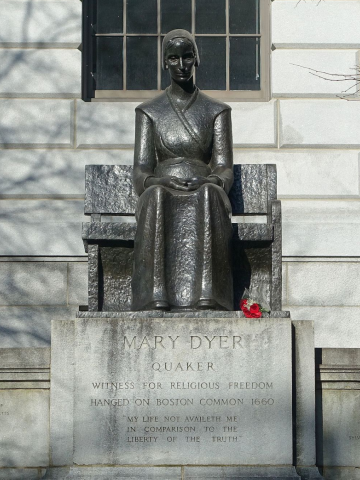 Cursed Quaker, repent and drive the devil from this Land.
Thus Minister Wilson cajoled Mary Dyer at the scaffold.
She preached the Kingdom of Heaven is at hand.

Do you wish the elders to pray for you?
She said I desire the prayers of all God’s people.
Cursed Quaker, repent and drive the devil from this Land.

Christ-like blood transported new fever,
her body encompassed healing faith,
she preached the Kingdom of Heaven is at hand.

She praised God, holding her brethren in her heart,
imagined soaring into the afternoon air.
Cursed Quaker, repent and drive the devil from this Land.

She longed for her husband and the waters of Narragansett Bay
to lay her head on their island bed of thorns.
She preached the Kingdom of Heaven is at hand.

Father, speak through me thy servant
she cried – certain, I lose my life by finding it here.
Cursed Quaker, repent and drive the devil from this Land.
She preached the Kingdom of Heaven is at hand.

Stan Searl is a member of Santa Monica Monthly Meeting (PYM). He is the author of several books of poetry, including Homage to the Lady with the Dirty Feet and Other Vermont Poems and Quaker Poems. He is currently working on a new book of poems about early Quaker martyrs.